Brooklyn Nine-Nine gave us an especially stellar episode this week in, “Skyfire Cycle”, one that mostly made sublime use of all of the show’s leads. Jeffords in particular got one of his best episodes since, “Ava” last season, when the Nine-Nine’s latest case allows him to meet his hero, an author of a Game of Thrones-esque fantasy novel saga, who begins receiving death threats from some unknown person.

The humour in this episode was once again fantastic all around, with the subplots effortlessly keeping pace with the core storyline that is headlined by Jeffords and Peralta. Gina also has a particularly standout stint this week, as she starts buddying up to Boyle’s cousins in an effort to influence the Boyle family vacation, while Santiago and Diaz struggle to deal with a marital spat between Holt and Kevin.

The show hasn’t brought a lot of attention to the Nine-Nine being stuck on the night shift recently, but that came into focus again in this week’s episode, beginning with a hilarious cold open that has Peralta and Holt sharing a rather bizarre victory regarding a floor waxing that the squad had never previously encountered. The fact that the night shift is referenced makes the timing of the Gina/Boyle plot a tad odd, possibly suggesting that every single Boyle cousin is a night owl, but that’s a pretty small nitpick.

Like I said, it’s been a fair while since Jeffords carried a strong core plot of his own, but Terry Crews was as humourous as ever as a star-struck Jeffords, who reveals that a huge part of his personal motivation stems from this saga of novels written by his idol. This effectively lent itself for another opportunity to have Peralta trying to live up to Jeffords’ expectations, but with the added hook of Peralta being the voice of reason when Jeffords feels that he has to live up to his own hero’s expectations. It provided a very nice contrast that reminds audiences of just how much Peralta actually looks up to Jeffords, and Peralta probably owes any kind of drive he has as a detective to Jeffords as well. 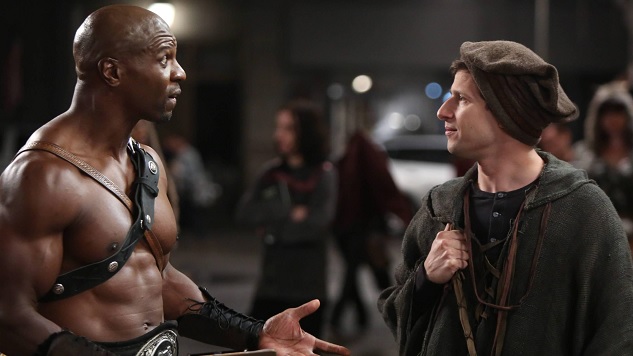 Naturally, the inscription written to Jeffords as a child that initially inspired him is revealed to be fake, and the way that the show placed this explanation into the story was actually fairly clever and logical. After a handwriting match between the threats and the inscription, the author is initially suspected of issuing the death threats to himself, though it turns out that the real culprit is the guy’s former assistant. The assistant was the one who wrote the inscription to Jeffords so many years ago, forcing Jeffords to deal with the pain of being lied to by his hero, but also effectively allowing Peralta to pick up his own hero in the process. The ending of this story arc is a tad rushed, since Jeffords quickly comes around and subdues the real criminal in the episode’s final minutes, and that’s a bit annoying, albeit minor, even if the constrained half-hour length of the episode does also seem to affect the subplot with Holt, Santiago and Diaz.

The foundation of this storyline was pretty amusing, as Holt and Kevin find themselves fighting over a statistical math problem that Diaz couldn’t care less about, but Santiago quickly leaps into. Unfortunately, Santiago, a math whiz in her own right, says that Kevin is right, making Holt even more irritable and desperate to prove his husband wrong. Despite all of Holt’s and Santiago’s efforts to use reason though, Diaz simply suggests that the night shift has kept Holt from spending time with his husband, and they just need to, “Bone down.” Again, the final result of this storyline is a bit rushed, since Diaz is obviously right, and Holt sweeps the entire affair under the rug in the very next scene after taking Diaz’s advice, though a series of cuts that unfold over forty minutes of the show’s time as Holt gets in Diaz’s face about suggesting that he’s sexually frustrated nonetheless makes for one of this episode’s funniest moments!

The Gina/Boyle subplot also generated big laughs throughout, with Gina asserting her strong will over the Boyle family to superb effect. This peek at Boyle’s cousins, who are all as meek and easily influenced as he is, was very funny! Another highlight moment in this episode is when Gina and Boyle convene all of the Boyle cousins, then do their own separate presentations regarding whether the Boyle family should stick to their usual vacation destination of Iowa, or go with Gina’s desire for Aruba. Gina ends up being the winner in the end, which makes sense, though Boyle nonetheless got his own satisfying resolution out of the story, when he points out to Gina that she learned everything about his family and essentially became one of them in her single-minded desire for victory. Gina having any reasonable comparison to the Boyle family seems asinine at first, but Boyle being right about this was actually very funny and satisfying, especially when Gina gets a few hints as to how close the Boyle family really is, and how close they’ll plan to be, even in death!

“Skyfire Cycle” has Brooklyn Nine-Nine hitting another high note in its fourth season, with very sharp writing lending itself to both satisfying storytelling and hilarious humour throughout. The half-hour length does seem to cut off some of the resolution to two of the three subplots, but you’re still getting a heavy dose of great laughs and smart character arcs in this episode. Peralta reminding Jeffords of how great a man he is was very effective, as was Gina inadvertently making herself at home as a new Boyle family member. The show also referenced Holt’s sex life for the first time, something that has never truly been done in previous episodes, but it managed to do this with lots of heart and humour, if also a slightly rushed conclusion. When the worst you can say about a Brooklyn Nine-Nine episode is that you wish there was a bit more of it however, you know you have another winner on your hands!

Brooklyn Nine-Nine 4.8: "Skyfire Cycle" Review
Brooklyn Nine-Nine soared again with a strong Jeffords-focused episode this week, one that also provided lots of laugh and wit with the other detectives.
THE GOOD STUFF
THE NOT-SO-GOOD STUFF
2016-11-30
93%Overall Score
Reader Rating: (0 Votes)
0%