After The CW’s landmark DC crossover’s proper beginning was foreshadowed during yesterday’s midseason finale of Supergirl, things got going on this week’s episode of The Flash, “Invasion!”, which is adapting the DC Comics miniseries of the same name from 1989. This week’s Arrow and Legends of Tomorrow episodes will also be titled, “Invasion!”, continuing the same events, with The Flash serving as the establishment of the big incident that brings the DC heroes of four CW shows together, as menacing DC Comics aliens, The Dominators land in Central City, with an unknown agenda.

Since Lyla is being shut out of efforts to make contact with the aliens at A.R.G.U.S., she shows Team Flash footage from the 1950’s at S.T.A.R. Labs, which is when The Dominators previously visited Earth, leaving a trail of destruction and violence in their wake. Quickly realizing that he can’t take on this threat alone, Barry races to Star City to recruit Oliver, Diggle and Felicity for the coming battle, which Thea also tags along with, despite formerly retiring her superheroine identity as Speedy, because aliens. No, seriously, that is actually her reason. 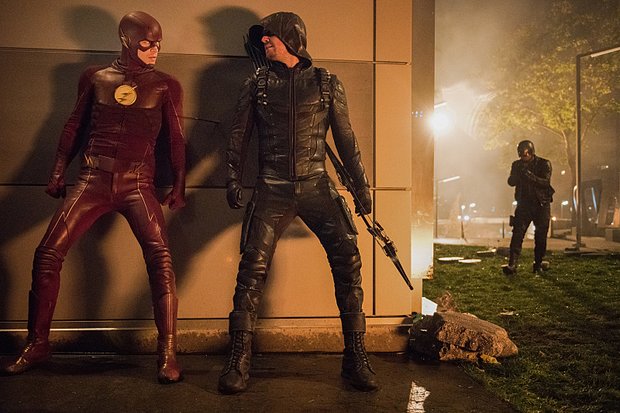 Thea suiting up again is plenty exciting, even if it also serves as a transparent excuse to bolster the present ranks of Team Arrow. With Laurel dead, and Oliver’s new recruits not even being brought up in this episode (this makes sense, considering that none of them are anywhere near ready to take on aliens!), Oliver will need to bring more than Diggle and the non-combatant Felicity to assist with matters in Central City, hence why Thea comes along. Even that won’t be enough though, so Felicity uses some unknown tech wizardry to summon the Legends from Legends of Tomorrow, while Barry decides that the best way to fight an alien is to recruit one of his own. Thus, Barry and Cisco go to the parallel Earth of Supergirl to bring Kara into the battle, which is formally revealed to be Earth-38 in The CW’s DC Television Multiverse for the first time. This is a small, but cool Easter Egg for the most hardcore of DC fans, since Earth-38 does exist in DC Comics continuity, being established as the setting for the vintage 1930’s and 1940’s comics that starred Superman and Batman, before the proper establishment of the mainstream DC Comics Universe in the 1950’s, with, “38” being a reference to Superman’s debut in 1938.

In the case of the previous two multi-night CW crossover events shared between The Flash and Arrow, The Flash’s offering generally trails Arrow’s, and we’ll see if that holds true tomorrow (this will be the first time that a Legends of Tomorrow episode has been properly part of a crossover), but overall, The Flash’s, “Invasion!” gets The CW’s history-making television crossover off to a pretty strong start. This was an episode filled with action, humour, drama, and no shortage of cool moments for the many DC superheroes at play from all four of The CW’s current DC shows, and while the fight against The Dominators themselves still has yet to begin, there was still plenty of excitement to enjoy as The CW’s DC ensemble comes together to prepare for the alien menace that has arrived on Earth-1. As a small aside, it was also interesting to note that The Dominators also exist on Earth-38, and landed on Krypton before Kara was born, making this the first time that the same villains have existed on The CW’s Earth-1 and Earth-38. 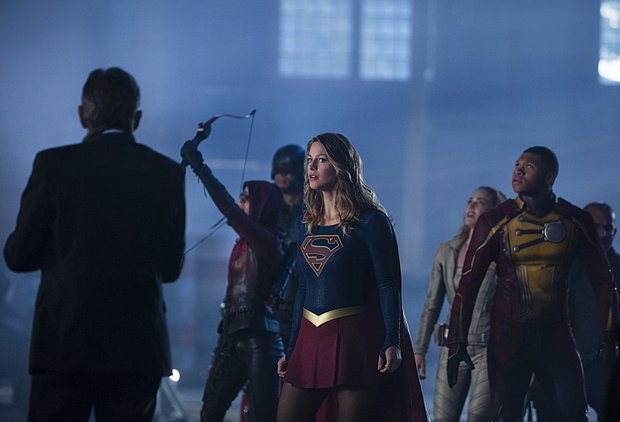 Even then though, this episode still managed to nicely further a few character arcs specific to The Flash in a great way, particularly with Wally, who continues to hugely enjoy his new speedster abilities, with Iris and Joe only becoming more worried with each training session. They decide, along with Cisco and Caitlin, that they can’t encourage Wally to head into danger yet, leading to Wally deciding to seek help from H.R. Why Wally thinks that H.R. can train him with no scientific knowledge is kind of a mystery, but it doesn’t matter, because H.R. turns him down. Nonetheless, Wally manages to save the day in the spectacular climactic battle of the episode, which has H.R. changing his mind, even if Iris and Joe remain worried after Wally sustains an injury in the process. Despite the understandable reservations of Joe and Iris, it was very satisfying to see Wally take his first major step to becoming a hero in his own right within the DC Television Universe’s central timeline, and it’s cool that he wasn’t completely forced to sit out the coming of The Dominators after becoming a speedster.

Another major plus in this episode is that it nicely boosted the quality of the Flashpoint storyline that has been very uneven since it debuted at the start of this season of The Flash. After Martin and Jefferson show Barry and Oliver the secret message that Barry recorded and snuck to Rip in the future during the events of Legends of Tomorrow, Cisco causes the truth to come out to everyone, and Barry has to come clean about altering the timeline to all of The CW’s major DC heroes at once, including Supergirl, even if she logically wouldn’t be affected by Flashpoint, due to living on a different Earth with a different timeline. Naturally, everyone ends up pretty pissed at Barry afterward, except for Oliver and Kara. In fact, Oliver takes the timeline alteration unusually well upon hearing the news, considering how intense he often is about being a hero.

Barry learning of a great disaster from his future self, something that he may have directly caused with his time meddling, was an effectively humbling moment that provides the best focus on the fallout from Barry’s attempt to save his mother since Jay first lectured Barry about the implications of meddling with the timeline. The team ultimately forgives Barry pretty easily after the climax, which feels rather convenient for the rest of the crossover, but at least it was nicely acknowledged that Cisco is still struggling with Barry directly causing his brother’s death in the revised timeline, even though the two seemed fairly chummy when going to get Supergirl. Another big, unexpected twist that was revealed in this episode is that Eobard Thawne’s article about Barry’s disappearance from 2024 is no longer written by Iris, but Julie Greer, a small-time DC Comics reporter. This potentially suggests that Barry may have erased his future marriage to Iris in meddling with the timeline, assuming Iris is now not marked for death, and that should hopefully help add more effective stakes for Barry in the show’s future, even after this season is done.

I’ve mentioned the climax of this episode several times now, and it already provides a pretty strong battle between the heroes, one that hopefully doesn’t have the crossover blowing its metaphorical load too early in terms of the spectacle. Like I said, The Dominators themselves haven’t actually attacked yet, but they do kidnap the president (and seemingly disintegrate him!), and trick most of the heroes into coming to them, so that they can be mind-controlled and begin attacking S.T.A.R. Labs. Not even Supergirl is resistant to the effects either! Fortunately, this provided a great excuse for some strong action with Barry and Oliver fighting all of the other heroes, since those two were lucky enough to sit out the attempt to save the president, so that Oliver could help Barry with his realization that he likely began a chain of events leading to the mysterious disaster in Eobard Thawne’s newspaper from 2024. Barry goads Supergirl into racing him for real so that she can fly through the mind control device and destroy it, while Oliver has to rescue an injured Wally while fighting off Sara temporarily, though fortunately, no one is gravely hurt before the situation is sorted out. 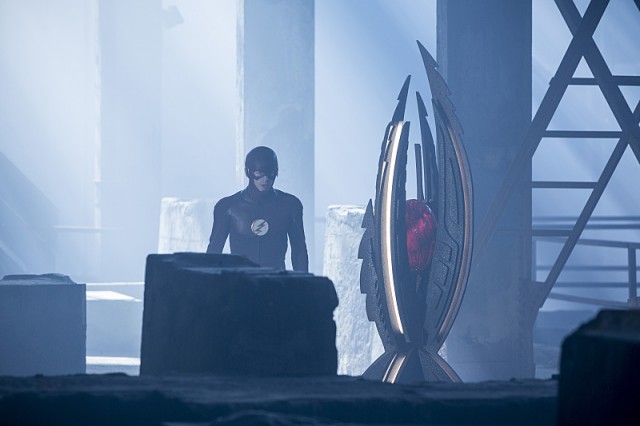 Finally, another thing that made this first crossover chapter a success was the nice chance for the heroes to all update each other on what’s been going on within their separate shows. Things like Caitlin being witness to Martin learning that his visions come from him now having a daughter after Flashpoint, Diggle learning that his former daughter has now simply been erased from existence, and Barry learning about Captain Cold sacrificing himself to save the Legends, all added some nice drama to an episode that definitely brought the fun and spectacle in spades as well. It looks like the drama isn’t letting up on Arrow tomorrow either, as the episode ends with several of the heroes being beamed away by The Dominators, leaving the good guys short-handed for the coming invasion!

So far, “Invasion!” is off to a great start, which is all the more impressive when one considers that it’s making television history in crossing over four shows across four nights (even if it’s mostly three nights, in reality). It’s a bummer that not every hero could show up, with Nate and Amaya from Legends of Tomorrow being notably and disappointingly absent for now, but the ensemble that is here were all given at least one great moment to shine each, with dedicated events on The Flash also being nicely nudged forward too. With this strong foundation, hopefully Arrow and Legends of Tomorrow deliver equally strong crossover offerings over the next two days.

The Flash 3.8: "Invasion!" Crossover Review
The Flash properly kicks off The CW's multi-night, "Invasion!" crossover on a great note this week, offering plenty of action, fun and drama that capitalizes on the large ensemble of present DC television heroes!
THE GOOD STUFF
THE NOT-SO-GOOD STUFF
2016-11-30
86%Overall Score
Reader Rating: (0 Votes)
0%