The Big Bang Theory presented a fairly good episode in, “The Property Division Collision” this week, at least in terms of humour. The episode didn’t fully realize two very inspired story ideas across its main plot and subplot, though still managed to mine some fairly strong laughs from both storylines, even if it had to force the two main conflicts. The fact that this episode’s catalyst was the return of the awkward Amy/Penny painting from so many seasons ago made for one of the best running gags in the episode though!

The episode’s main storyline had Sheldon deciding that he and Leonard need to go over their mutually owned things, now that Sheldon has moved in with Amy. This seems to fully cement Sheldon and Amy taking Penny’s old apartment, and Penny now just living with Leonard in Leonard’s apartment going forward, which should hopefully keep The Big Bang Theory fresh and interesting with its plotlines for at least the rest of this tenth season. More importantly though, this turn led to some great jabs between Leonard and Sheldon when this property divvying plan inevitably turns sour.

As funny as some of the slights were though, such as Sheldon hijacking the wi-fi and Leonard wearing Sheldon’s apartment flag as a toga while doing laundry, the overall storyline of Leonard and Sheldon being at odds never totally registered. The conflict between the two, while funny, felt pretty forced, and Leonard suddenly blowing up at Sheldon, along with Sheldon seeking a series of retaliations, never truly felt like it made sense for either character. Leonard even directly points out more than once that he doesn’t care if Sheldon takes all of their shared possessions. So, where exactly is this feud stemming from?

The show tries to create some insight through a very funny guest appearance by Christopher Lloyd, who plays a half-senile elderly vagrant that Sheldon rents his room out to as another means of getting back at Leonard. Lloyd is one of the funniest parts of the episode, and even helps resolve the conflict by pointing out that Leonard and Sheldon are simply acting out because they’re entering a new phase of their lives. This seems poignant at first, and is enough to get the two men to stop fighting, though it doesn’t really hold up to scrutiny. This is especially true when one recalls that the two couples live right across the hall from one another at this point. Thus, why bother raising a stink about property that is barely moving a few feet for now anyway? Hell, there’s never even any guarantee that either couple will ever move out of the building, at worst. 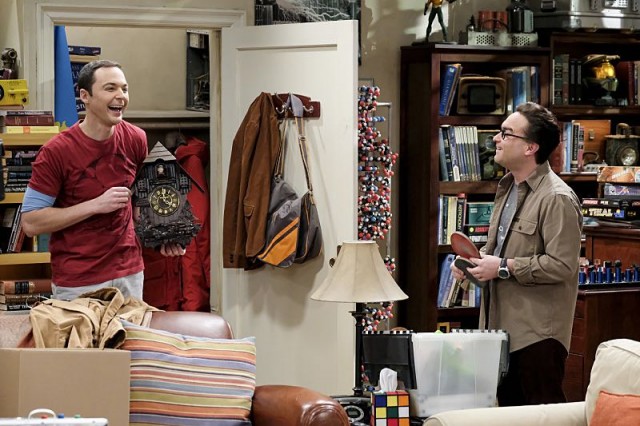 Regardless, the subplot at the Wolowitz house was also an interesting idea, and started off fairly well. Like the main plot though, some of the comedic steam became lost as the episode went on, even with things starting out strong. This subplot has Stuart trying to move in to the house again, after he’s evicted from his apartment, and Stuart tries extra hard to earn his keep by being super helpful. This steps on the toes of Raj however, who begins competing with Stuart to try and outclass him in the Wolowitz servitude department.

This is a wonderfully twisted subplot idea that lends itself to more good jokes for the most part, as Howard begins to bask in having Stuart and Raj compete to make him happy, while Bernadette simply savours the chance to have other people do her work for her, now that being on her feet is more difficult. Bernadette’s pregnancy seems to have made a bit of a jump in this episode, possibly because the showrunners now want her to have the baby earlier, and that’s especially apparent when this subplot appears to be prematurely interrupted before it’s properly resolved. Bernadette seemingly goes into labour in the final minutes of the episode, and this is where things end, setting the stage for the midseason finale in a couple of weeks, after the show once again takes next week off.

The Big Bang Theory is winding down for 2016, with just one episode to go before it begins its midseason hiatus, but lack of storytelling logic aside, “The Property Division Collision” was a pretty funny offering overall. If nothing else, Leonard and Sheldon did manage to once again grow closer after their latest spat, even if the Wolowitz subplot didn’t get a real resolution, on account of Bernadette suddenly going into labour. Like I said, Bernadette’s pregnancy seemed to jump several weeks between episodes, and the timeline of her pregnancy since Season Nine has felt a little bizarre in general, but I suppose that Baby Wolowitz will be a worthy centerpiece for the midseason finale in two weeks, just the same.