NOTE: Full spoilers from this episode of, “Brooklyn Nine-Nine” are present in this review

Brooklyn Nine-Nine is airing its midseason finale a bit later than most other shows, having returned after Christmas with an hour-long offering that will see the show going off the air for several months. “The Fugitive” offered pretty much everything a fan of Brooklyn Nine-Nine could want before such a long hiatus though, including a big new step in Peralta’s and Santiago’s relationship, some reliable antics from the detectives, another fantastic Peralta/Holt team-up, and best of all, the latest return of Doug Judy, a.k.a. The Pontiac Bandit!

Craig Robinson’s Judy doesn’t appear until the second half of the extended episode, which spans the 11th and 12th episode slots of Season Four due to its sixty-minute length including commercial breaks, but the first half still effectively hits the ground running, as a prison transport van overturns on a New York street, setting nine convicts loose. After the police manage to make a perimeter around the area and evacuate civilians, Peralta and Santiago decide to put another big bet into motion; Whoever catches the most escapees can keep their apartment, while the other person moves in with them. Naturally, Santiago having a nice apartment, as we’ve seen, contrasted well with Peralta’s apartment being comically awful, creating some very real stakes, even though the turnout is a bit predictable.

Nonetheless, watching Peralta team up with Jeffords, and Santiago team up with Boyle led to plenty of funny moments, especially when both detectives’ partners actually end up being on the side of their person, despite seemingly being more allied with the other person in most instances. This was a great callback to the very start of the show, namely Peralta’s and Santiago’s long-running arrest bet from Season One that paved the way for their current romantic relationship, and it finally gave fans a chance to see these two in competition again, despite the fact that they’ve almost consistently had to be allies over the past while, now that they’re a couple.

As I said though, the turnout is a bit predictable. Eventually, after the last perp is caught by both parties simultaneously, Peralta and Santiago hilariously try to recite the Miranda Rights faster than the other person to win the bet, though Peralta concedes halfway through, and decides that he’ll move into Santiago’s apartment. It might make sense that the show would lean into this, rather than try to throw a curveball, since Santiago clearly has the nicer apartment, and Peralta displaying his latest moment of surprising maturity is something that’s fairly well-earned. Peralta deciding to concede defeat is a little out-of-nowhere, even if he does somewhat explain what inspired him to make the decision, but whatever, all’s well that ends well for these two.

Fortunately, back at the precinct, we still got plenty of material for the other detectives. Gina begins believing that she is the key to saving the world, making her super-amenable and humble, but when this illusion is shattered later on, her doubling-down on her difficult personality led to plenty of great laughs. Likewise, Diaz, Boyle, Holt, Scully and Hitchcock all working together to try and translate a foreign woman’s unknown language made for a very funny subplot, even if it was pretty evidently filler. Still, the jokes kept coming with the rest of the precinct, and that’s what counts. There was even a very funny Marshawn Lynch cameo with Holt and Diaz, though it wisely didn’t overstay its welcome.

After all of the perps are rounded up however, one is discovered to actually be the van driver, with the most dangerous, a serial murderer, still being at large. When Peralta discovers a surprising family connection with the man, he decides to enlist the aid of an unlikely ally; Doug Judy! This is where the second half of the midseason finale begins, as Peralta must try and convince Holt to trust Judy, so that they can catch the escaped criminal. This was a very smart and very funny core plot that yet again wonderfully capitalized on Judy’s presence. It even found a way to keep building on the tense relationship between Peralta and Judy, by cleverly acknowledging how Judy turned out to be perfectly trustworthy during his Season Three appearance in, “The Cruise”, leading to Peralta now trusting him and treating him like a friend.

Since Holt understandably doubts the word of Judy, particularly after Peralta offers him immunity if his foster brother is caught, he assigns himself along with the case, where he has to endure the annoying, yet adorable bonding shenanigans between Peralta and Judy. Judy basically being a second, non-cop version of Peralta in this storyline was consistently hilarious, especially as he keeps getting ahold of a badge and gun somehow. There were even some smartly dropped red herrings that seemed to hint that Judy may no longer be trustworthy this time, and Holt may be right. When the trio tries to track the criminal to an auction to nail him before he can steal a priceless jeweled egg, and Holt brings his prized car (which is apparently not even a nice car), that’s when the tension really gets high in an effective way. Once the criminal ends up stealing every car, including Holt’s, right under everyone’s noses, Judy really starts to look more guilty than ever.

Once the cops track the criminal to a chop shop, where we get to see Holt’s comical reaction to his nice-but-not-really-nice car being broken down for scrap, Judy appears to drive off with the bad guy, seemingly making him out to be a villain in the end, though even this offered a great twist. Turns out, Peralta and Judy turned on the ‘Find Your Friends’ function on their phones after they got separated one day, following a trip to Dave & Busters (have they been hanging out off-screen between episode events?), and this means that Judy intentionally led Peralta to a house, where Judy subdues the bad guy and allows for a successful arrest. Judy being pardoned, and maintaining his friendship with Peralta, while also earning the begrudging respect of Holt, was an incredibly satisfying turnout. Holt even got a new version of his same old crappy car in the end, which Judy legitimately paid for, since it’s not actually a nice car. It was a brilliant conclusion to a brilliant return by the Pontiac Bandit!

Two subplots punctuated the second half of, “The Fugitive” as well, and both were pretty funny in their own right. The first involves Jeffords and Diaz trying to help track the criminal, only to have Diaz parkour up a wall at one point (she allegedly had a ‘dark past’ as a child gymnast), and Jeffords realize that he can’t. Jeffords begins taking his age really hard, much to Diaz’s annoyance, though eventually, Jeffords realizes that, even if his muscles aren’t exactly what they used to be, at least his mind is sharper than ever. It’s a pretty predictable result, but it’s tough to complain, since Terry Crews really brought his comedic A-game here.

The other subplot was another very funny offering that centered on Boyle, after he learns that he has been cut out of an office text chain, due to his overabundance of annoying, clingy texts. After Boyle reverts to his old ways upon everyone letting him back into the chain out of pity, Santiago and Gina try to teach him how to text properly, which creates a healthy batch of strong jokes to fill the remaining space. This serves as the device for a surprisingly shocking ending to the episode as well, as Boyle successfully becomes a more prudent texter, leading to Gina turning around and celebrating as she crosses the street… Right before being hit by a speeding bus! Even worse is that Gina says earlier in the episode that she would rather be hit by a bus than get another text from Charles. Oh dear. An ominous, “To Be Continued…” prompt then shows up on screen as the episode ends, something that will no doubt have fans going crazy over the many, many weeks that Brooklyn Nine-Nine now has to spend off the air, as its timeslot is temporarily borrowed by new FOX sitcom, The Mick for its debut season. 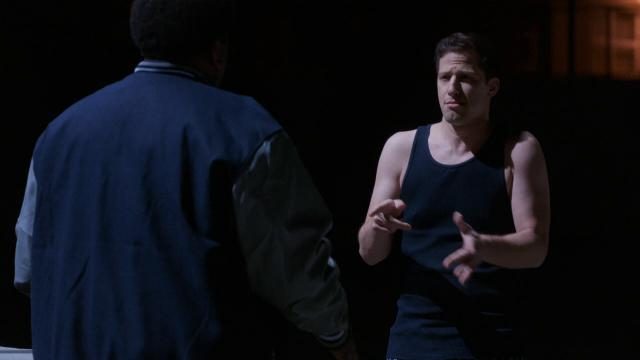 Like I said, this was the perfect way to begin the huge hiatus that Brooklyn Nine-Nine must now undertake for the start of 2017, since this was a meaty, full-featured midseason finale that was packed with superb comedy, lots of great character work, and yet another outstanding re-appearance by Doug Judy. The Gina shocker at the end was also a strong way to keep fans on their toes as they endure the agonizing wait for Season Four’s back half, giving them plenty to speculate about before this show returns later this Spring. It’s extremely doubtful that Gina is dead, since there’s no way that Brooklyn Nine-Nine would kill off one of its funniest and most beloved lead characters, but even Gina couldn’t possibly escape a bus hit like that without any consequence. Will Gina ever be the same again?