Accompanying some cool new screenshots for the game, along with a gameplay showcase during tonight’s NVIDIA keynote at CES 2017, BioWare revealed the release date for one of this year’s most anticipated video games, Mass Effect: Andromeda, on their official blog today. The game will officially release on March 21st for North America, and March 23rd for other territories. This would line up with leaked retailer listings that seemingly outed the March 21st launch date for Mass Effect: Andromeda this past Fall, though this is the first time that EA or BioWare has acknowledged that the date is legitimate. 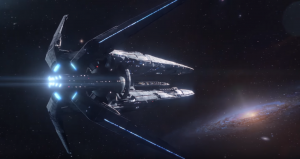 Mass Effect: Andromeda takes place around 600 years after the events of the previous trilogy of Mass Effect games, and will begin an entirely new story set within the Andromeda Galaxy. Players take control of a male or female sibling with the surname, ‘Ryder’, and are designated with finding new planets for humanity to colonize. Naturally, most other story details are being kept under wraps, though the game will feature the same branching dialogue, romantic relationship and moral affinity options that defined the previous trilogy of Mass Effect games.

In related news, BioWare recently claimed that Mass Effect: Andromeda isn’t planned for release on Nintendo’s upcoming new platform, Nintendo Switch, despite the game’s publisher, EA teasing that a major IP of theirs will be among the platform’s launch titles this March. EA also famously rejected incessant fan requests for a remastered PlayStation 4/Xbox One release for Mass Effect Trilogy last year, making a blunt statement wherein they felt that such a move would be, “Lazy”, and that it would be more prudent to focus the company’s resources on the development of future Mass Effect games, including Mass Effect: Andromeda.

Keep journeying to Eggplante for all major news and updates on Mass Effect.