After a disappointingly sub-par midseason premiere last week, Gotham thankfully rebounded pretty exceptionally with this week’s episode, “Smile Like You Mean It.” That’s good, since we just have the Winter finale next week before Gotham goes off the air until late April, and at this point, it looks like we’re getting a clearer taste of what’s going to succeed the show’s ‘Mad City’ portion of Season Three later in Spring.

As the episode’s title suggests, Jerome finally gets a proper revival at last, though not right away. One of the episode’s biggest and best surprises, which had the main Jerome plot firing on all cylinders, is that it took a very different route from what viewers no doubt suspected. Originally, when Dwight, that acolyte from last week played by The Dark Knight’s David Dastmalchian, tries to shock Jerome’s recently-thawed corpse back to life, it doesn’t work. With the GCPD coming hot on his tail, he has no choice but to flee, despite being a key part of a cult that has been promised numerous times that Jerome is going to return that day.

Obviously, considering that he’s the biggest and deadliest Batman antagonist of all, the buildup to a proper Joker for the Gotham universe is crucially important. So far though, it’s definitely being done very well. As Gordon and Bullock start looking into cult signs around the city, they start seeing that the cult’s numbers may be a lot bigger than they initially thought. Not only that, but the GCPD even have a mole that’s working on the side of the cultists, one that was converted after Jerome’s initial attack on the precinct early last season. The idea that a Jerome cultist has been inside the precinct the entire time, and is impervious to the threats and coercion of both Gordon and Bullock, is suitably creepy, and definitely sells the influence of the cult very well.

Something that was also a very effective twist on Jerome’s revival was Dwight’s way of trying to get around the initial attempt of resurrecting Jerome failing. Rather than admit his failure to his fellow cultists, he instead cuts off Jerome’s face and wears it like a mask, declaring that everyone in the cult is Jerome, which he symbolically portrays. The cultists seem to accept this, and begin marching on a TV station, which they take hostage to broadcast their message of anarchy and murder. This makes for an effectively tense situation for the GCPD to deal with, and one that isn’t necessarily dependent on Jerome himself to push it all forward. 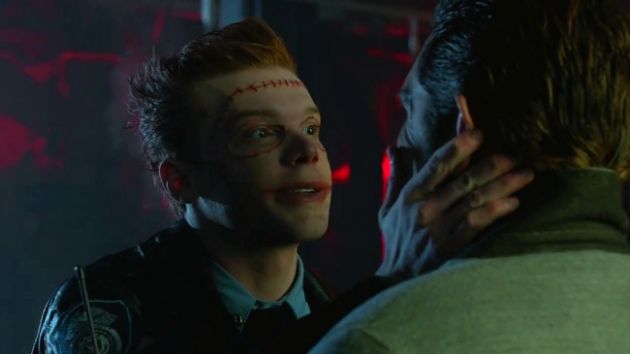 As disturbing as the whole face removal is on its own, it’s also a very clever reference for DC Comics fans, who would know that The Joker actually had his face removed in the printed panels as well, as one of his first major story turns in DC’s New 52 comics reboot from 2011. More than just being a clever reference though, this also provided a clever way to make use of Jerome without being overly dependent on him, since, when Jerome does spring back to life suddenly in the GCPD morgue, he spends the episode hunting for his face and virtually nothing else. This is actually very fitting and darkly enjoyable, especially when Jerome appears to forgive Dwight when he saves him from arrest after the police re-take the news station, only to soon after wire him to explosives in the local power plant and say he doesn’t forgive Dwight for stealing his face. Even with the great Maniax episodes from Season Two, Jerome is becoming more of a recognizable and terrifying proto-Joker than ever here, and the episode ending with Jerome’s explosion plunging all of Gotham City into total darkness sets up tons of promise for next week’s Winter finale!

Jerome’s main plot stole the episode so completely in fact, that the subplots were struggling to keep up. The Penguin plot didn’t capture quite the same momentum that it did in the previous episode, but watching Barbara toy with Penguin was pretty entertaining, even if viewers already know that Penguin is being played. The unfurling storyline of the takeover is still working fairly well, especially as we see Barbara and Tabitha kill off an alarming amount of Gotham City’s criminal higher-ups, though Penguin being so oblivious to the whole thing is kind of disappointing, and a little untrue to his character. Sure, he’s blinded by love to an extent, but Nygma and Barbara anticipating when Penguin would anticipate a trap felt like a forced way to keep him in the dark. Maybe Nygma, being the future Riddler and all, truly is that smart, but has Penguin seriously not stopped to realize that he’s quickly dismantling his own grip on the city? 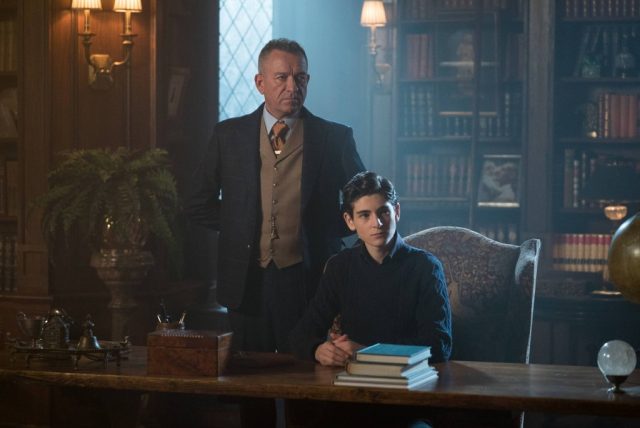 The Selina/Maria subplot also slowed to a crawl in this episode, unfortunately, especially when Maria is revealed to be playing Selina and Bruce for money. That feels too predictable, even if Bruce being fully aware of the plan, and playing into it anyway, felt like a sweet, if messed up gesture for Selina, so she could have a mother in her life. Surprisingly, it’s Selina that’s really against her mother taking advantage of Bruce, even more so than Alfred apparently, which proves better than any kiss or look ever could that she truly does care about Bruce, and doesn’t want him to be taken advantage of. Unfortunately, I doubt that much else is going to come of this plot in the Winter finale next week though, considering that Gotham City is now in a city-wide blackout, and I imagine that most of next week’s episode is again going to be stolen almost entirely by Jerome and his huge cult of psychopaths.

Still, if you’ve been crossing your fingers for Gotham to start properly laying the groundwork for a true Joker arc, after Jerome was part of a posse and quickly killed off early last season, “Smile Like You Mean It” definitely begins the true rise of The Joker’s influence on this series in style. I’m still not wholly convinced that Jerome will become the Joker that one day grows into the arch-nemesis of Batman, but even if he’s merely a forerunner to the true Clown Prince of Crime for the Gotham universe, he’s still a great character, and one of this show’s better villains nonetheless. The episode even ended with Gordon having no other option but to helplessly watch as Jerome’s vision for a powerless, murder-filled city begins to come to pass as well. Hopefully, Jerome’s big return can keep elevating next week’s Winter finale then, as we prepare for the next major phase of Gotham in Spring.

Gotham 3.13: "Smile Like You Mean It" Review
Jerome comes back from the dead in an especially great episode of Gotham this week, one that properly begins the rise of the city's future greatest threat in style.
THE GOOD STUFF
THE NOT-SO-GOOD STUFF
2017-01-23
85%Overall Score
Reader Rating: (0 Votes)
0%