Gotham really started to hit a high note in last week’s episode, “Smile Like You Mean It”, which finally properly kicked off Jerome’s machinations as the show’s proto-Joker. The promising setup to an exciting Winter finale also paid dividends this week to boot, as, “The Gentle Art of Making Enemies” makes itself a contender for one of Season Three’s best episodes to date, finally properly delivering a true Bruce vs. Jerome conflict to savour.

Before that can unfold however, Jerome’s power outage has plunged all of Gotham City into chaos, leaving most of the city in the control of Jerome’s lunatics. The GCPD have their hands full desperately trying to keep order, while Gordon and Bullock try to zero in on Jerome himself as fast as possible, believing that arresting him can help quell the mayhem and anarchy. 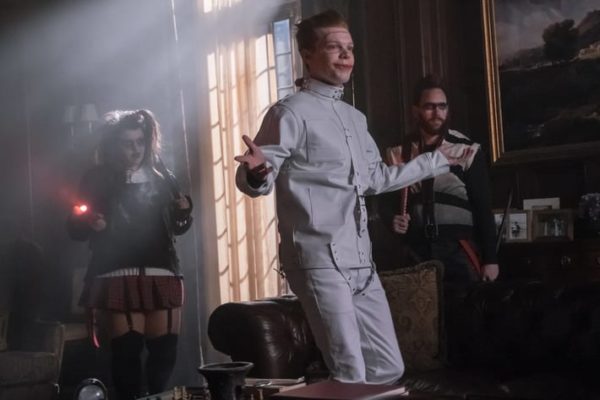 The way that the episode leaned into the idea of Jerome not being able to die again without it feeling cheap and annoying worked very well, as it led to a standout conflict for both Bruce and the GCPD, who are now faced with a deadly villain that has already come back to life, and who has a whole legion of fanatics terrorizing the city with his return. As much as Gordon and the GCPD also got their share of cool moments in this episode, it was the core plot of Bruce that headlined most of the events though, as Jerome invades Wayne Manor and takes Bruce hostage, with Gordon just barely saving Alfred from a grisly death at the hands of some of Jerome’s psychos. Selina and her mother were completely and conspicuously absent in this episode, despite being in the same area right as the power outage hit, though viewers likely won’t dwell on this, as too many other interesting and effectively disturbing things went on in the main Jerome/Bruce plot.

Bruce took another awesome step in evolution in this Winter finale as well, starting to show gradually more and more shades of the future hero he will one day become. Bruce’s steely stare and unyielding bravery were all the more impressive as he quite literally stared death in the face, with Jerome deciding to kill Bruce, simply because it’s the last thing he remembers wanting to do, before Bruce convinces him to make a real spectacle out of it, as just killing him in Wayne Manor would be anti-climactic. This sustained idea of Jerome being an id-driven creature that is basically targeting Bruce because it seems like a good idea at the time is very inspired, and also makes him a more convincing proto-Joker, rather than some grand baddie with a convoluted plan. Jerome even directly attacks the notion of having a plan later in the episode, pointing out to Bruce that he and his followers aren’t looking for a plan, they’re looking for an excuse, because they were always psychopaths at heart, and just wanted someone to tell them it was alright to embrace that side of themselves. 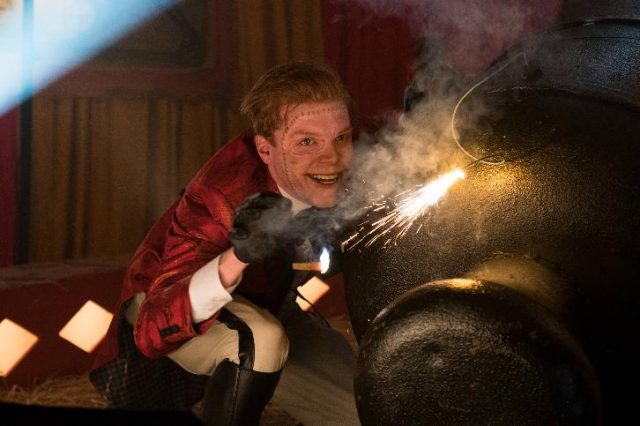 Jerome taking over a carnival and holding the attendees hostage, to be used as deranged targets in various murderous carnival games, was also delightfully twisted, with lunatics crushing people’s heads with giant mallets, and dropping people into dunk tanks filled with piranhas. This is arguably the most disturbing that Gotham has gotten all season at this point, and it really earned it, making the menace of Jerome very memorable. Even Bruce convincing Jerome to make a greater show of killing him as a means of buying time led to some effectively chilling, yet strangely over-the-top moments, as Jerome decides to handcuff Bruce to a pole before firing a cannon full of sharp objects at him. Fortunately, Bruce escapes, leading Jerome into the House of Mirrors, right as Gordon, Bullock and Alfred finally show up, with a strike force at their backs, to start arresting and taking down Jerome’s cultists.

The House of Mirrors sequence is also one of the season’s best moments yet, as Bruce must face Jerome in a game of cat-and-mouse, with both psychologically dueling each other’s ideologies. This was yet another instance where the glimmers of the future Batman became more apparent in Bruce’s manner and tactics, and it made for a really cool forerunner to a Batman-vs.-Joker battle, as Bruce finally corners Jerome and begins beating on him. Bruce even starts to prepare a fatal stabbing with a shard of glass, though upon seeing himself in the mirrors, he stops, with a scream of anguish at the realization that he can’t bring himself to end Jerome’s life. This was an equally satisfying ending to a very satisfying climax, and helped lay the groundwork for Bruce discussing with Alfred the importance of knowing where the line is, and formulating his key rule of not using lethal force as Batman in the future, even though Bruce hasn’t yet conceived the idea of being Batman yet. 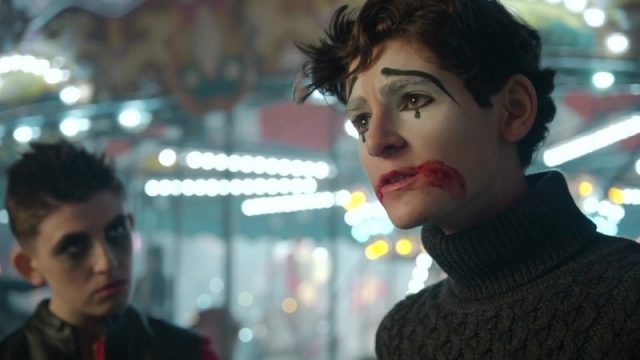 While all of the superb sequences with Bruce, Jerome and the GCPD were unfolding, the final stages of Nygma’s revenge plot also played out with Penguin, as Nygma finally confronts Penguin, and ties him to a car with a chain frozen in ice being the only thing that stops a barrel of acid from dumping on Penguin and killing him in a grisly manner. A wayward cop manages to bail Penguin out, but this only leads to Penguin being recaptured by Barbara, Butch and Tabitha, and learning that they were all working with Nygma the whole time, after Nygma pretends to be at their mercy, to prove to Penguin that he is incapable of truly loving or caring about another person.

Surprisingly, and against Nygma’s prediction though, Penguin says he’d rather die than give up the man he loves, whereupon Nygma realizes that there’s no choice but to put Penguin out of his misery. This has the episode ending as Nygma finally shoots Penguin in the gut and kicks him into the river, leaving quite the cliffhanger for the several months that Gotham will be spending off the air until late April! Fortunately, this also means that Nygma’s increasingly complex revenge plot can also finally come to a close, so we can hopefully move on to better developments with both of these characters. I say both because I seriously doubt that Penguin will die, even if it really seems like there’s no way out for him here. It didn’t seem like there was any way out with that barrel of acid earlier either, but Penguin predictably got out of that bad end, because Gotham can’t very well go and kill one of Batman’s biggest recurring foes so many years ahead of Batman’s actual appearance in Gotham City. 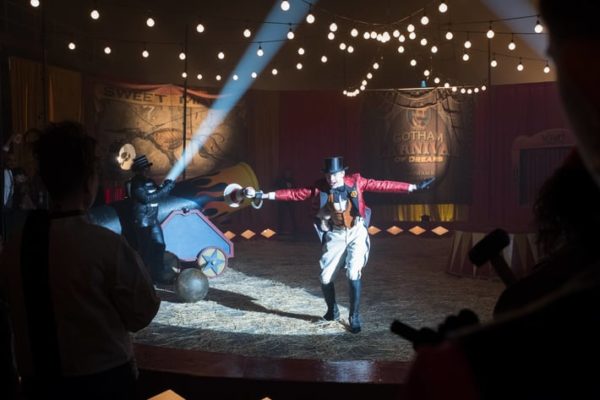 We’ll be waiting a long while for Season Three’s proper back portion, but it’s at least great that Gotham began its lengthy Winter hiatus on a superb note. “The Gentle Art of Making Enemies” gave us a standout arc for Bruce, as well as a disturbing and memorable climax to Jerome’s grand return, while also finally finishing up the tumultuous Penguin/Nygma conflict, and laying the groundwork for what we can expect when the show returns towards the end of April. The Court of Owls is also beginning to stir, with Gordon’s uncle, a key member, contacting him as the Bruce clone begins a mysterious task for the Court as well, setting the stage for the next big threat in effective fashion. Selina and her mother’s abrupt absence was pretty noticeable, considering how much of a big deal Gotham was making over the re-appearance of Maria over the past two episodes, but beyond that small quibble, the show is in a very strong position for its Winter nap. Even with Jerome stashed in Arkham for now, I really can’t wait to see what happens next!

Gotham 3.14: "The Gentle Art of Making Enemies" Review
Gotham's Winter finale ended up being one of Season Three's best episodes yet this week, as Bruce finally properly confronts Jerome, and takes another step to becoming the hero his city needs.
THE GOOD STUFF
THE NOT-SO-GOOD STUFF
2017-01-30
90%Overall Score
Reader Rating: (0 Votes)
0%