Livewire’s long-awaited return for Supergirl’s second season finally unfolded in this week’s episode, “We Can Be Heroes”, which brought one of the show’s best recurring villains to date back in a surprisingly solid episode, considering how much it pulled the rug out from under Livewire’s character in the end here. Making things even better is that this episode offered the first genuinely appealing Guardian storyline, after James and his new superhero identity has spent so much of this season being its weakest element so far.

When things begin, Kara is training Mon-El to finally become a superhero in his own right. Obviously, this isn’t fully going to plan, as Mon-El is reckless and somewhat full of himself, not to mention that his repressed feelings for Kara make him something of a liability in battle. This becomes apparent when Mon-El inadvertently endangers several NCPD police officers after Livewire seemingly escapes from prison later in the episode. 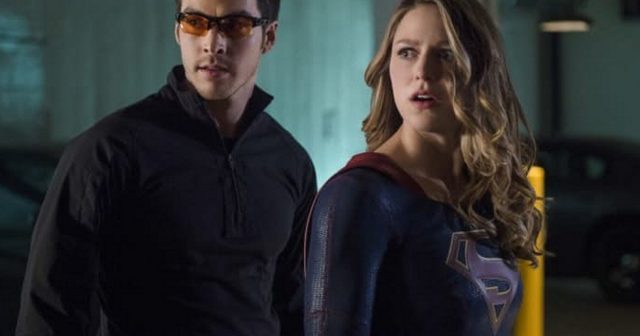 I say seemingly, because, in one of the episode’s coolest story twists, Livewire wasn’t actually the villain of this particular storyline. Instead, she was the victim, being snatched out of prison (they seriously just locked her up with other human prisoners?), and forcibly drained by a deranged scientist that is trying to build an army of Livewire-like people with the same abilities. A disguised guard and an inmate of Livewire’s prison are the two fake Livewire prototypes, and mostly serve as the muscle in the action scenes, which, despite almost entirely lacking the real Livewire, really didn’t disappoint this week.

Aside from Kara discovering the truth about James being Guardian at last in this episode, Mon-El is also confirmed to be unreliable in battle by both James and the DEO after putting the NCPD officers in danger, so Kara finds that she has to take matters into her own hands, which makes her especially assertive and stressed over Livewire being ‘at large’. The show portraying Livewire as basically Supergirl’s arch-nemesis at this point on the series is kind of interesting, since that’s not generally true in DC Comics lore, and I don’t totally understand why Livewire is getting so much under Kara’s skin at this point, when so many other metahumans and aliens have proven to be bigger and more personal threats, but whatever. Maybe it’s simply because Livewire is one of the more beloved villains on this series, and was probably the first recurring baddie that the show fully got right.

Aside from the handful of action scenes with the phony Livewire clones, this was an episode that was very heavy on character development, though it almost always worked very well. Mon-El having to face his shortcomings and his feelings for Kara was a highlight, and one that the show wisely didn’t make too schmaltzy, even as Mon-El finally confesses his feelings in the episode’s final minutes, only to be seemingly rejected by Kara. Mon-El’s development has been a bit uneven over the course of the season so far, but it’s being handled really well here, as we see Mon-El struggling with the man he is, and trying to find the man that he thinks he should become. It’s great that Mon-El is still making mistakes and isn’t instantly becoming hero material as well, since it makes for a more compelling character arc when the transformation is more gradual and organic.

As I said, the Guardian development also got a lot better this week at long last, since James having to fess up about his superhero identity to Kara and the DEO, along with Winn having to admit that he went along with it, also led to some standout drama and tension. Kara rejecting James’ desire to work with him and Winn and refusing to condone their activities was very interesting, and touched upon a more thought-provoking conflict of Kara outwardly believing herself to be above James as a Kryptonian, claiming that James’ human vulnerability will get him killed. The contrast between the human hero vs. the extraordinary Kryptonian is a direction that Supergirl probably should have led off with (especially since we’ll probably never see Batman on this show, despite all of the references to him existing off-screen), and now that Kara knows the truth about James’ identity as Guardian, hopefully that’s the first step to improving this faulty character arc.

Another subplot had M’Gann suddenly suffering a violent psychic attack and entering brain-death, forcing J’onn to struggle with the idea of doing a mind meld to save her. This was a fairly solid subplot, though J’onn refusing to help M’Gann after M’Gann saved his own life feels a bit out-of-character, since the Martian Manhunter is generally a more honourable hero than that, especially when J’onn admits that it’s not right to let M’Gann die, yet also refuses to save her when he obviously has the means to do so. Alex eventually manages to talk J’onn into doing the right thing though, and the scene of J’onn entering M’Gann’s mind and seeing first-hand how she turned against her own people was a fantastic one, rife with great drama and emotion. The idea of J’onn finally forgiving M’Gann and rising above his blanket hatred of the White Martians is a pleasant result, and it does lead well into next week’s Martian-heavy episode, so I’m looking forward to seeing the next phase of J’onn’s and the DEO’s continued struggle against the White Martians, now that J’onn has learned to finally fully accept M’Gann as an ally.

“We Can Be Heroes” found a neat and clever way to re-interpret the character of Livewire, and the general idea of empathizing with a greater good and sense of humanity in even our enemies was something that the episode realized very well. J’onn’s somewhat irrational condemnation of M’Gann still doesn’t fully make sense with his character’s personality, and it’s really too bad that an interesting Livewire episode still led to some really flat, disposable knock-off villains that failed to compare to the real thing, but Kara entering a ladies’ agreement with Livewire to spare the baddies’ lives, which saw her getting to run free for a bit, does nicely leave room for her inevitable return in another episode. It is easy to miss the good old-fashioned mayhem of Livewire’s former appearances, but it’s nice to be reminded that there’s more to Kara’s foes than villainous impulses and mass destruction.

Supergirl 2.10: "We Can Be Heroes" Review
Supergirl offered a surprising new take on Livewire in a good episode this week, one that also had James and Mon-El taking their next steps as would-be heroes.
THE GOOD STUFF
THE NOT-SO-GOOD STUFF
2017-01-31
84%Overall Score
Reader Rating: (0 Votes)
0%