The Flash finally saw a welcome improvement in this week’s episode, “Dead or Alive”, which managed to deliver a fun premise by taking the spotlight off of Barry for a change, and instead spotlighting the tense bond between Cisco and H.R. This comes to a head when a metahuman from Earth-19, Gypsy, comes to Earth-1 to arrest H.R. and bring him back to stand trial, which essentially amounts to putting him to death, since inter-dimensional travel is a capital offense on Earth-19.

The show’s odd, but unshakable pattern of having female metahumans that almost always end up being more appealing and memorable than the male ones continued to hold up in this episode, as Gypsy made for a great, highly distinct foe for Team Flash to face. This is especially true when Cisco develops a quick attraction to her, which is the source of some genuinely cute humour at various points throughout the episode, especially when it’s pointed out how often Cisco keeps falling for antagonists. Compounding the complexity however is that Gypsy isn’t evil at all, and is simply doing her job as what’s basically an inter-dimensional cop.

The proper conflict of the episode gets going when Cisco volunteers to face Gypsy in a trial-by-combat, which is always held to the death on Earth-19, in order to save H.R.’s life. Since Gypsy has Cisco’s same vibe-related abilities, but is far stronger than Cisco, Team Flash immediately becomes pessimistic about Cisco’s chances for survival, trying and ultimately failing to help him become better at wielding his abilities. Barry and H.R. even try to cheat the system by capturing Gypsy before the battle, but this predictably doesn’t go as planned, and that only digs Cisco deeper into the hole he’s gotten himself into.

Considering that Barry is often glorified the most in this ensemble, being this show’s main character and all, it was satisfying to see Cisco step up and be the real hero this week, especially in defense of a man that he doesn’t even care for all that much, at least not outwardly. Cisco putting his life on the line for H.R. also had a nice callback to the two incarnations of Harrison Wells that came before, as Cisco admits to H.R. that the two other men with his face had always told him what he needed to hear when he struggled. By saving H.R., Cisco wishes to pay it forward, which brought the two men closer together, and even had H.R. coming up with a few surprisingly inspired ideas to turn the tables on Gypsy in the fight.

The battle itself was also a very cool display, as the two vibers bounce between several parallel universes as they wield their powers against each other. The brief return to Earth-2 was neat enough, but one of the episode’s most surprisingly hilarious moments is when this fight drops Cisco and Gypsy into Earth-38, Supergirl’s Earth, where they briefly fall into CatCo before the eyes of an astonished Eve Tessmacher. Cisco using H.R.’s ideas to ultimately defeat Gypsy was also pretty great, though one of the few sour notes in this episode came when Cisco ended up beating Gypsy surprisingly easily, and suffered seemingly no consequences for sparing her life afterward. H.R. suffered the consequence of never being able to return to Earth-19, since Gypsy had to lie about killing him to preserve her reputation, but we knew that H.R. wasn’t going anywhere anyway, so this is pretty minor.

The episode packed in a couple of subplots as well, with the larger one being Iris stubbornly pursuing a scoop on a dangerous arms dealer for CCPN, despite the protests of Barry, Joe and Wally. Iris eventually talks Wally into helping her out, as the two were a crime-fighting duo during Flashpoint, and this all basically amounted to an excuse whereupon the show can explain how Plunder got his impossible super gun from last week’s episode. This also however demonstrated Iris being especially bold and reckless now, since she doesn’t fear death, on account of knowing her foreseen death in May. This turn with Iris is very clever, and it does make for a solid way to capitalize on Iris having a foreseen death, yet still trying to use it to do some good for the world. 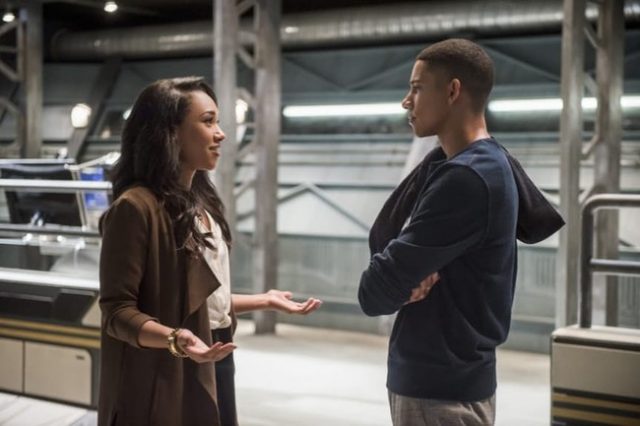 The other subplot was mostly just a tease for later. Julian points out that Barry doesn’t seem to be getting any faster, and the way that the speed quotient was calculated from Barry’s trip to the future, he won’t be fast enough to save Iris from Savitar before she’s killed. Wally, however, already seems to be gradually becoming faster than Barry, so viewers will no doubt be able to see where this is going. Still, Barry trusting Wally to save Iris for him lays the groundwork for Kid Flash’s finest hour in the near future, and it’s cool to see that Wally actually has his own advantages as a budding speedster, and isn’t just completely playing second fiddle to Barry all the time. Slowly, but surely, Wally is becoming more of a partner than a sidekick, and that’s awesome to see!

“Dead or Alive” effectively made up for last week’s disappointing midseason premiere, presenting several creative storylines, while also nicely pushing the show forward, all without having to lean on Barry that much. The Flash can hopefully still find its way to a better back half in 2017, after all of Season Three’s early struggles in 2016, but now that the show is starting to better capitalize on the prophecy of Iris’ grim fate, it is starting to lay the foundation for a series of better storylines. As great as the whole Flashpoint saga was in DC Comics lore, it might not be so bad that The Flash is largely moving away from it, especially when Wally becoming a hero and H.R. becoming a valuable addition to Team Flash have proven to be noticeably more interesting at this point.

The Flash 3.11: "Dead or Alive" Review
The Flash found its footing again with a significantly better episode this week, one that put Cisco and H.R. in the spotlight as Wally continues to develop his Kid Flash identity.
THE GOOD STUFF
THE NOT-SO-GOOD STUFF
2017-02-01
88%Overall Score
Reader Rating: (0 Votes)
0%