It certainly didn’t start out that way, but Legends of Tomorrow is quickly starting to become the best of The CW’s four current DC Universe-inspired shows at this point. The show hit another grand slam in this week’s episode, “The Legion of Doom”, which presented a heavier perspective from our group of villains, while also offering a very strong subplot for the heroes, most notably Martin.

We spent a lot of time with the Legion of Doom in this episode, to the point where Malcolm Merlyn and Damien Darhk felt like the main characters this week. The two have had some passing interactions on Arrow, but their tense partnership started to effectively blossom and develop here. Merlyn’s calculated strategy and Darhk’s no-nonsense boldness led to some humourous and ultimately effective clashes, also leading to the two becoming a better team than they have any right to be in the end. 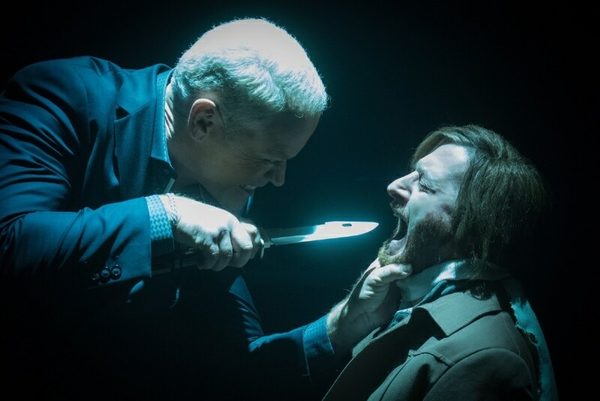 Furthering the development of this great villain dynamic was the apparent fleshing out of Eobard Thawne looking at Merlyn and Darhk as underlings, rather than partners. This nicely leaned into viewers’ perception of the Legion, seeing as Reverse Flash is outwardly much more powerful than Arrow’s duo of veteran big bads. This villain tension also allowed Rip to make his own mark on the episode, while both Merlyn and Darhk try various tactics ranging from torture to League of Assassins mind tricks. It all ends with the two managing to extract a tooth (and doing surprisingly little damage to Rip while they’re at it), which points them to a safety deposit box that Thawne believes holds the remaining pieces of the Spear of Destiny.

The pursuit of the Spear pieces led to a pretty cool heist element, as the bumbling Rip was forced along with Merlyn and Darhk to try and infiltrate a bank in Switzerland, where Rip allegedly hid the whereabouts of the remaining Spear pieces. This presented lots of standout action and humour, especially as Merlyn and Darhk predictably bicker all the while, especially when the safety deposit box inevitably doesn’t contain the Spear pieces in the end. Even with a lot less of Reverse Flash in the episode, it was a smart choice to start effectively justifying why Thawne would even bother enlisting the aid of two Arrow villains, when he’s a seemingly invincible speedster that can travel through time.

Merlyn’s and Darhk’s clever endgame of trapping Thawne in one place so that he has to spill about why he needs them also led to a fantastic surprise reveal. The episode cleverly dropped hints about Thawne being especially skittish, and never being able to stay in one place, which can even be traced from earlier episodes in Season Two, where Thawne seemed highly incapable of standing still in one time period, for seemingly no reason. Turns out, Thawne is being pursued for being a speedster that exists outside of his own timeline. If you watch The Flash, you may suspect that this is a Time Wraith, a creature dedicated to erasing speedsters that meddle with time.

Turns out however that Thawne is actually being pursued by Black Flash, a dark, zombie-like version of The Flash that should be recognizable to DC Comics fans, and especially to viewers of The Flash. Viewers of Legends of Tomorrow’s high-speed sister show would have seen that its Season Two big bad, Zoom seemingly transformed into Black Flash as he was pulled into the Speed Force by Time Wraiths in the season finale. If this is indeed a way to bring Zoom back to the DC Television Universe as a re-tooled Black Flash, it’s an excellent one. Considering the character’s history in DC Comics lore, bringing him in as an omen of Thawne being erased from the timeline in his former life is especially inspired, and also serves as a great way to prevent the Legion from feeling too unstoppable and invulnerable on this show.

When we do check in with the heroes, we see them trying to extract the necessary data from the Longinus Medallion, in hopes of finding the Spear pieces before the Legion does. Martin then decides to controversially enlist the aid of his aberration daughter, Lily, taking a trip with Jefferson to Central City in 2017 to bring Lily onto the Waverider. This doesn’t sit well with anyone, though Martin demands that everyone not tell Lily that she’s not supposed to exist. Mick however, being a thick-headed blabbermouth, ends up spilling the beans by accident, leading to a major confrontation between Martin and Lily.

Martin has already had to confront the major fallout from creating an aberration that he can’t easily erase earlier in the season, though now that he’s come to genuinely love and respect the daughter he never had before, this made for an excellent way to revisit the conflict from a new angle. Lily having to learn that she wasn’t real a short while ago for Martin was genuinely heartbreaking, and Martin having to confront his initial refusal to have children, only to now accept Lily’s existence, made for a smart and emotional conflict and resolution. All was well in the end too, thankfully, and I’m glad to see that the show didn’t try to drag out this spat to create an overlong, melodramatic conflict that Legends of Tomorrow really doesn’t need right now.

Legends of Tomorrow continues to crush it in its second season, and, “Legion of Doom” once again has the show taking a bold, yet highly effective new creative direction, as we get some welcome time with the villains’ ensemble this week. Since the Legion of Doom consist of multiple veteran baddies from Arrow and The Flash, developing their dynamic together is just as important as developing the dynamic of the heroes, and it’s great to see that Legends of Tomorrow is rising so well to that responsibility. This great villain-centric angle also compensates for some of the mishandling of Vandal Savage during Season One, as the Legion are already far better antagonists in every respect. Now that they’ve become a more effective team in their own right, as we see what Thawne in particular is now up against, the Legion is only becoming more dangerous, though fortunately, that should also mean that they’re only going to get more enjoyable from here!

Legends of Tomorrow 2.10: "The Legion of Doom" Review
Legends of Tomorrow delivered yet another excellent episode this week, giving us some very welcome face time with the villains' ensemble.
THE GOOD STUFF
2017-02-01
96%Overall Score
Reader Rating: (0 Votes)
0%