Powerless had a somewhat rocky pilot episode last week, though one that still had its shining moments of humour, along with tons of noticeable potential. Like I said in last week’s review, the fact that the show didn’t speed out of the gate is a bit predictable, since NBC’s ensemble sitcoms tend to need extra time to really find their groove and hit their stride effectively. Sure enough, Powerless took a few positive steps in its second episode, “Wayne Dream Team”, which offered a few more laughs than the pilot, even if the subplot ultimately surpassed the appeal of the main plot.

One of the issues with the core plot is that its premise is a bit faulty. This storyline unfolds with Emily wanting to push a new Wayne Security invention called the ‘Rumbrella’, a metal umbrella that protects civilians from falling rubble as a result of superhero battles, by the next Friday, which Teddy, Ron and Wendy complain about. When the three don’t look like they’re doing any work, Emily wants to keep them on task, though not at the price of no longer being their friend.

The idea of Emily struggling between being a boss and being a friend isn’t a bad one, even if NBC has leaned on that storyline across several of their bread-and-butter modern workplace sitcoms before. The problem though is that it feels like this idea needed an episode to itself to really thrive. Instead, it’s squished between both the introduction of a Superhero Fantasy League, another sound idea that needed more room to breathe, as well as the introduction of an aggressive HR head that the entire office is afraid of. With this many developments going on at once, the humour and writing felt like it started to get stretched pretty thin, which hurt the episode and made it unfocused.

The Superhero Fantasy League story particularly suffers, since it does indeed present a great way for Emily to bond with her new underlings at Wayne Security. Unfortunately though, when Emily wants to keep her employees on task, she asks the scary HR head to disable the fantasy website, which leads to the disability of the entire internet at the office. This is where the fault of the core plot really lies, because even for a sitcom set in the DC Universe, this is way too unrealistic as a conflict. Not only would taking away the internet severely inhibit several workers’ ability to do their jobs, but it’s a non-issue anyway, because people can just disable wi-fi and go to the fantasy website via their smartphone. That actually would have been a funny way for Emily’s plot to fail, but the episode strangely doesn’t go that route. 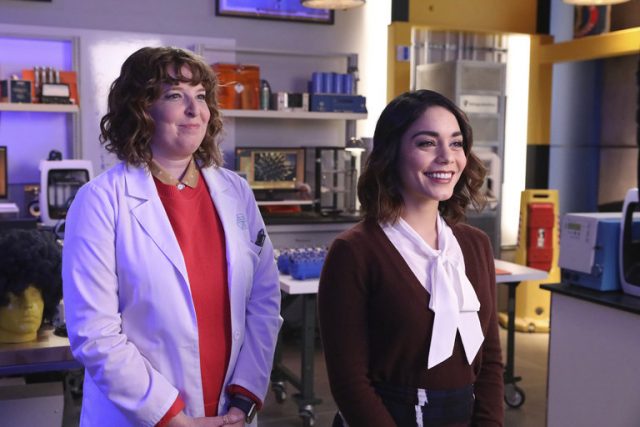 Instead, the disabling of the internet seems to provide a fresh excuse for Emily’s co-workers to despise her again. As we established from the pilot though, that doesn’t work very well when Emily’s character is so bubbly, attractive and friendly. By and large, it felt like an excuse to just have Emily stand up to the HR rep, likely foreshadowing a real workplace nemesis for Emily down the line. Even so though, I do have to say that the montage of Emily having to watch a six-hour anti-bullying video six times was very funny. It’s just too bad that it got crammed into the very end of the episode, where the humour kind of came too little, too late with that sequence. If you’re an avid DC fan though, seeing highly obscure DC Comics villain, Prince Evillo narrate the anti-bullying video as part of a community service sentence was one of the best jokes and DC references of the episode for sure!

Fortunately, like I said, the subplot with Van turned out a lot better in this episode. After Van is cut out of an executive photo, he starts trying to photoshop himself back into it, particularly when Jackie starts getting resistant about helping him. This leads to Van using the office’s art team to put him back in the photo with an awkward finger gun pose, which quickly becomes a meme around the office. At least the jokes at Van’s expense were a lot funnier here in contrast to the main plot with Emily, as was the final revelation that the photographer only cut Van out of the photo because he was being a dick and making faces. Like the story of the main plot though, this subplot feels a bit hobbled by how over-stuffed the episode is, since it has to attract the attention of the workers while they’re also dealing with the lack of internet, and their renewed animosity toward Emily.

Powerless is predictably a bit better in its sophomore offering, even if it’s still perfecting its recipe. “Wayne Dream Team” is ultimately too over-stuffed with a lot of promising ideas, leading to a sense that only the Van subplot got the right amount of time to cook, but at least too many good ideas is better than merely bad ideas. The jokes got a little better here nonetheless however, and the lead ensemble is still pretty likable. Like I said, Powerless has tons of potential that it’s still learning to tap, but even if it’s baby steps, I’m just glad to see that this promising DC-themed sitcom is managing to slowly move forward.