The Walking Dead returned for the back half of Season Seven this week, in a fairly decent midseason premiere that gets the show’s 2017 run off to an acceptable, if also dull start. “Rock in the Road” started laying the first pieces of Rick’s rebellion in place, complete with Rick being back to his more assertive self at last, though naturally, the first steps of the revolt don’t quite go as planned.

As you can imagine, Gregory is less than thrilled about the prospect of uniting The Hilltop with Rick’s forces in order to eliminate The Saviors and Negan. Despite The Hilltop’s citizens being mostly on board, Gregory refuses to allow anyone to battle with Rick, leaving them immediately hitting a wall in the Negan resistance effort. Fortunately, Jesus has another idea however, pitching the group on paying a visit to The Kingdom. 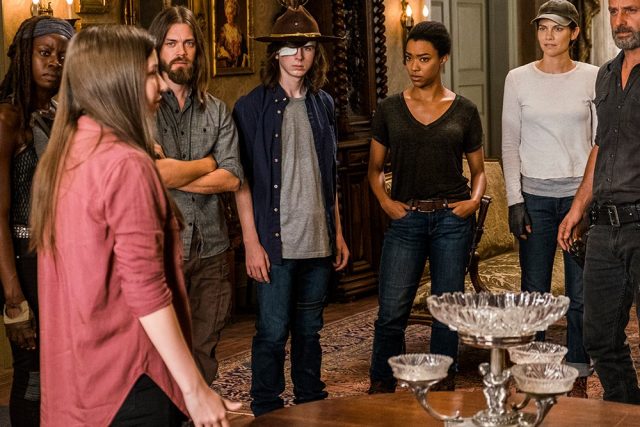 The rest of the survivors beyond Carol and Morgan meeting Ezekiel and the rest of The Kingdom doesn’t disappoint in terms of entertainment value, and provides another welcome moment of comic relief for this otherwise bleak show. Rick’s great parable about the rock in the road as an allegory for the need to rise up against a major obstacle manages to bend Ezekiel’s ear for a little while, though despite the urging of Benjamin, Ezekiel also decides not to join Rick’s crew in battle against The Saviors. What he does offer is asylum for Daryl, since The Saviors are ruthlessly hunting him, but that’s small consolation when Rick’s party once again fails to generate any more numbers.

I suppose it’s too easy to have a resistance form at the snap of a finger, but it still feels annoying to have both Gregory and Ezekiel flat-out refuse to ally with Rick in the inevitable battle to come. Gregory I sort of get, since he’s a coward and a moron, something that even The Kingdom’s folks seem to point out, but that begs the question of why Rick’s party even bothered to ask Gregory for help at all. Ezekiel however just feels like he’s refusing so that the back half of the season can pad itself out more. It’s only a matter of time before the fight comes to Ezekiel’s door, and The Kingdom is forced to take up arms. Thus, Ezekiel’s refusal pretty much just wastes time, since it seems fairly obvious that he’ll have to reverse his decision sooner rather than later.

Fortunately, Rick’s resolve remains unbroken for now, which is good, as the survivors encounter a barricade of cars while driving back to Alexandria. After listening in on The Saviors via a stolen walkie-talkie and learning that they’re going to look for Daryl at Alexandria, right as a herd of Walkers starts marching towards them, the survivors are caught in a pretty tight spot. This is the one point of the episode where it provides any action or thrills and not just mere travel and dialogue, thanks to Rick’s party hastily trying to grab explosives out of a trap before the Walkers arrive, though Rick and Michonne are forced to make use of a crude defense when it inevitably takes too long. The two driving cars that hold up a steel cable which takes out literally over a hundred Walkers, was definitely one of this episode’s coolest moments, though Rick and Michonne being swarmed by Walkers afterward rang pretty hollow, since they’re obviously going to get away unscathed.

When everyone does make it back to Alexandria, they arrive back just in time to greet Simon and some thugs, who start tearing the place apart looking for Daryl. As we know though, they’re not going to find him, so this sequence sadly just amounts to feeling like complete filler. Even at a lesser extension of 73 minutes long, this episode still feels like it’s not justifying any expansion beyond the normal 60-minute timeslot.

The only thing that’s accomplished with Simon’s visit in the end is leading everyone to realize that Alexandria’s pantry and supplies have been raided, and Gabriel is missing, causing several survivors to think that he abandoned Alexandria. Yet again though, that’s obviously not the case, as Rick discovers a clue left by Gabriel mere minutes later, which leads everyone to a huge band of survivors that surround Rick’s crew with guns right as the episode ends. Rick’s growing smile in an otherwise dangerous situation completely spells out that this is the survivors’ answer to striking back against The Saviors too. I suppose we’ll find out more about this new crew next week then. 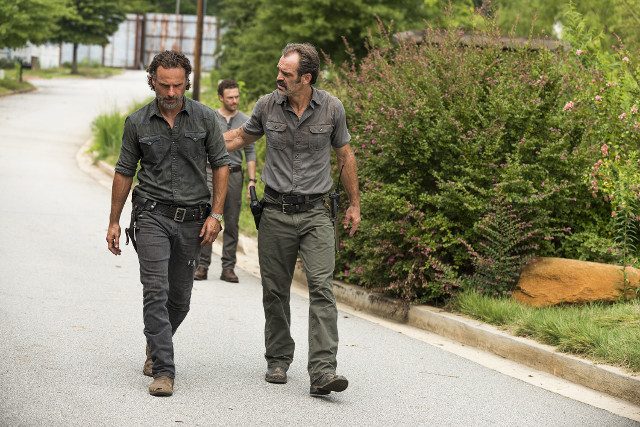 There were handfuls of entertaining bits in, “Rock in the Road”, namely Rick’s party’s first full introduction to The Kingdom, and that awesome Walker-shredding moment with the cable, but disappointingly, for a midseason premiere of The Walking Dead, this episode was also pretty boring outside of these better moments. The Hilltop’s and The Kingdom’s leaders refusing Rick feels like a complete waste of time, since that obviously won’t stick towards the season’s end, and much of the rest of the episode just felt like padding, making the extended 73-minute length yet again feel pointless. With the introduction of a new crew of survivors, hopefully next week’s episode is a little more exciting. I get that the show can’t blow through its Negan rebellion effort right at the start of 2017, but it doesn’t need to drag its feet quite this much either.

The Walking Dead 7.9: "Rock in the Road" Review
The Walking Dead's midseason premiere had select moments of entertainment this week, though was also disappointingly boring in many other spots.
THE GOOD STUFF
THE NOT-SO-GOOD STUFF
2017-02-12
73%Overall Score
Reader Rating: (0 Votes)
0%