Chances are, at some point or another, you’ve been forced to spend an extended amount of time in an indoor place that is either far too hot or far too cold. Remember how miserable you probably were? That’s what this week’s episode of Superstore is all about, after the heating gets out of control at our favourite Cloud 9 branch. “Super Hot Store” provided the show’s reliable high standard of entertainment, as Cloud 9’s workforce grows gradually more irritated at their heating situation, though one of the subplots sadly ended up being kind of a dud this week.

With the heat having adverse effects on all of the employees, this episode’s storyline gets split into three major arcs. The first arc involves Amy and Jonah trying to deal with Marcus, who was recently promoted to the warehouse, and is outwardly too lazy to clean up a stubborn yogurt spill. Marcus’ promotion to the warehouse is a little bit sudden, even if the explanation of him being given a, “Promotion without pay” due to not suing when he cut his thumb off (remember that from, “Back to Work” around the start of the season?), was very funny. I suppose that the showrunners decided that they hadn’t represented the warehouse end of Cloud 9 at all, and since Marcus’ presence on the show is growing, he was the logical choice to move over there.

After Amy starts becoming more and more frustrated with Marcus, she eventually tells all of the Cloud 9 employees not to clean up the yogurt spill, since it’s a warehouse problem and they need to deal with it. Another blow-up between the two then culminates with Amy firing Marcus after he mouths off, which has the entire warehouse walking out in solidarity. This forces the floor employees to do warehouse work, which gives them a decent change of pace, even if it does sort of abandon the hot store arc halfway through.

Actually, this was true of almost all of the storylines, even the better ones. Arguably the best storyline of the episode belonged to Dina and Garrett, who initially end up as cranky as everyone else, though after Garrett convinces Glenn to leave his air conditioned office, he sticks around to beat the heat. Dina eventually catches Garrett, but soon stays in the office with him, leading to a series of awkward silences, before the two decide to have sex again. This was incredibly funny, and nicely leaned into viewer expectations in regards to Dina’s and Garrett’s hook-up from before. You could really cut the sexual tension with a knife, and this alone made for the most potently hilarious storyline in this episode. Garrett and Dina taking a small step in admitting that they don’t hate hooking up with each other was also nicely satisfying, since we all know that this is going to keep happening, whether Garrett and Dina like it or not. 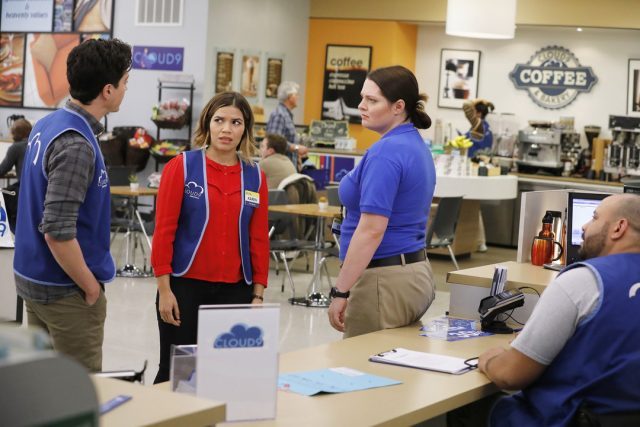 The weak subplot unfortunately came in with Glenn, who was left to bumble around on the roof with Cheyenne, predictably failing to fix the corporate-controlled heat problem. This sets up a sort of crisis where Glenn admits that he’s useless, since corporate has taken so much control away from him, but this leading into Glenn suddenly declaring that he wants to travel with Cheyenne is a little too out there and weird. Obviously, this plan doesn’t stick, since the two simply go back to the store with its air conditioning restored and nothing changes, though Glenn falling in the spilt yogurt and being unable to escape as Cheyenne tries to coach him to safety was at least a solid ending gag to conclude the episode with.

As for how the core plot ends with Amy, Jonah and the remaining floor employees that aren’t tied up in other plots (Brett also sits this effort out, instead letting cold breezes come in from the automatic door with a security guard), the employees’ efforts to do warehouse work predictably go badly, and this forces Amy to face that she illegally fired Marcus. Fortunately, the amusing, if convenient resolution, which had the dunderheaded Marcus not questioning whether Amy has the authority to fire him, and subsequently coming back to apologize and ask for his job back, worked out just fine. I suppose that the storyline didn’t have anywhere else to go in the half-hour space, but in terms of cementing Marcus’ new importance in the warehouse, this plot certainly got the job done.

“Super Hot Store” didn’t fully live up to the potential of its premise, since most of the storytelling doesn’t stick with the super-heated store around the halfway point, but it still hit more often than it missed. The latest awkward sexual encounter between Garrett and Dina is downright hysterical, and the increased representation of the warehouse, which Marcus has become something of a ringleader for, does present some good promise for future Superstore episodes. It’s too bad that the Cheyenne/Glenn subplot ended up sputtering pretty early on, especially since the two of them traveling the world together is actually a funny thought, but I suppose it’s best left to the power of our imaginations.

Superstore 2.14: "Super Hot Store" Review
Superstore offered some reliable laughs in the bulk of its storytelling this week, even if the Cheyenne/Glenn subplot was a bit weaker.
THE GOOD STUFF
THE NOT-SO-GOOD STUFF
2017-02-17
84%Overall Score
Reader Rating: (0 Votes)
0%