Powerless picked up signficantly after some early struggles in its first two episodes this week, with, “Sinking Day” being far and away the show’s best episode so far. The series is still working its way up to the true potential of its ensemble, but the core plot finally started working pretty much universally well, even if the episode’s subplot still felt a bit like it was trying to play catch-up.

The core storyline of the episode involves Van losing Ace Chemical as one of Wayne Security’s clients, a very familiar chemical manufacturer responsible for the transformation of a certain Clown Prince of Crime in DC Comics lore. Due to the sheer size and influence of Ace Chemical, Van’s incompetence has lost the company a lot of money, to the point where Van’s father, Van Sr., even comes by to express his personal disgust at his son. 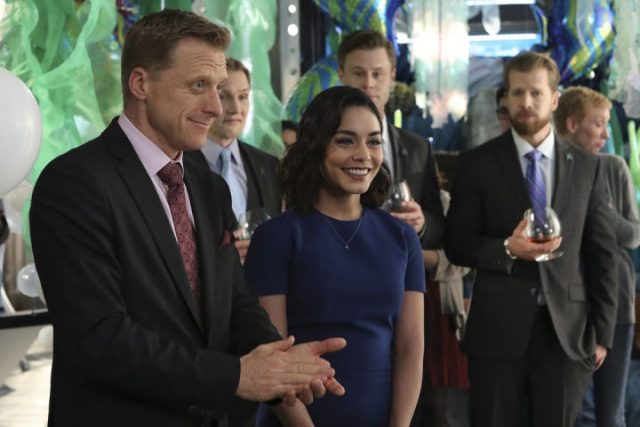 This is a perfect example of what I mean when I say that NBC’s ensemble sitcoms usually need a bit of time to hit their stride. Now that we’ve started to better establish the characters of Emily and Van, they’re able to lend themselves to a pretty amusing core plot that strikes a perfect balance between original workplace sitcom sensibility, and DC Universe-skewing sensibility. Van’s comical laziness, cowardice and complete disregard for consequence really improved a lot in terms of laughs in this episode, with Alan Tudyk often stealing this episode and running off with it, as we start getting yet more of an indication of how spoiled Van truly is.

Vanessa Hudgens was another big standout in this episode as well, as she also got leveraged a lot better by this core storyline. Emily’s rapidly decreasing respect for Van nicely came into focus here, particularly when she ends up doing all of the work to fix Van’s mess, while Van simply writes a cheesy song about his father hating him. Emily, meanwhile, takes advantage of a devastating attack on Atlantis by Aquaman’s arch-nemesis, Black Manta, in order to court the Atlanteans for a massive new defense contract that would make Wayne Security billions of dollars.

There’s one last curveball to top off this amusing storyline from here, as Van cuts in to Emily’s negotiation with the Atlanteans to promise them a big party for their cultural holiday, Sinking Day, celebrating when Atlantis first sunk into the ocean. After promising that he can get Aquaman to attend, Emily starts becoming worried, since Van obviously lied, leading to her declaring that Van is a complete disappointment as a boss. It was smart to have Van actually turn out to be the one that seals the deal though, as his lie about Aquaman allows him to provide personal gifts to his new clients, and even allows him to stand up to his father so that he can make the deal. Van Sr. showing up suddenly at the Sinking Day party feels kind of unrealistic, and simply served to create little more than pointless drama that barely lasted a minute, but it was still nice to see Van prove that he’s not a complete disaster of a boss in the end.

The subplot of the episode meanwhile involves Teddy, Ron, Wendy and Jackie all trying to ponder if the Wayne Security accountant, Alex is actually DC superhero, The Olympian. Jackie has a comically obvious crush on The Olympian, which was kind of a one-note joke, though the rapport between Teddy and Ron in particular helped to compensate for that. Wendy suddenly breaking a chair over Alex to seemingly prove that he’s not The Olympian at the end of the episode was also pretty hilarious. 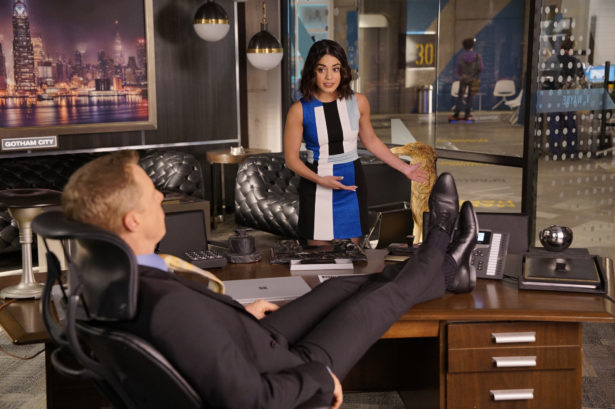 Ultimately though, not enough is really done with the Olympian subplot, so it doesn’t manage to keep pace with the core plot surrounding Van and Emily. We see a bit of supposed ‘action’ as The Olympian rescues a teetering bus and flies around in the background, but the ambiguity behind The Olympian only half works as a joke in the end. Beyond the funny ending gag of Wendy hitting Alex with a chair, it felt like the other characters were just stuck in this throwaway subplot because they had nothing else to do this week. It’s not a bad thing when the jokes are still satisfactory, but it does feel like Powerless is still working on perfecting its character balance when writing its episode storylines.

Nonetheless, “Sinking Day” proves more than ever that Powerless has a lot of potential that it’s still learning to tap, and it came a lot closer to tapping it in this week’s offering. Van’s and Emily’s characters were really elevated by them learning to work as a team, even if the other characters didn’t have nearly as much impact on the episode. The incorporation of Atlantis as a core story element was inspired as well, even without the direct presence of Aquaman. Even the quick reveal that Ron is actually from Atlantis around the start of the episode made for some decent gags that lampoon the failures of Atlantean cultural reverence among, “Land people.” I’m glad to see Powerless finding its footing more, and I really hope that this uptick continues in the weeks to come!