Legends of Tomorrow brought all of the pieces of the Spear of Destiny together at last this week, bringing the Legends to another especially dangerous new time period, as they try to put together the final means of destroying the Spear once and for all. “Fellowship of the Spear” brought in another real-world geek favourite for the Legends’ latest quest, which had everyone traveling to 1915-era France, smack in the middle of World War I, to seek the Blood of Christ, a relic that serves as the only way of destroying the Spear for good.

After quickly breaking into the Legion’s headquarters at the Vanishing Point, where they steal back the missing Spear pieces and fully reform the Spear of Destiny, the Legends comb through some research to try and figure out how to dispose of the Spear, after it proves indestructible. Apparently, the key authority on the Spear turns out to be none other than one J.R.R. Tolkien, the very same J.R.R. Tolkien that would go on to write The Hobbit and the Lord of the Rings trilogy. Since Tolkien serves as a lieutenant in France during the Great War, within the especially bloody Battle of Somme, the Legends need to make contact with him to determine their next step.

The show may begin with the expected trappings of a typical Legends of Tomorrow episode here, though before long, things got significantly heavier than usual. The violence of the war is a bit cleaned up, on account of this being a CW show that is very much subject to network censorship guidelines, but the dire toll it takes on the soldiers of both sides is nonetheless portrayed pretty bluntly. Amaya is particularly affected by the horrors of war, having just learned about the tragic future of herself, her descendants and her village, at the conclusion of the previous episode.

This knowledge has Amaya especially tempted to use the Spear, which has her volunteering to leave the Waverider, so that she doesn’t succumb to the temptation to use it. Mick is also especially tempted, having been reminded of the late Captain Cold’s death during the team’s time at the Vanishing Point. The fresh memories even have Mick seeing Snart again, even sustaining a punch in the face from him that feels all too real, after Snart takes his latest turn to mock Mick being part of the heroes’ side, and going as far as to take orders obediently. If you didn’t know better, you’d swear that Snart was actually there in the flesh this time.

In fact, Snart actually is there in the flesh in this case too! Finally, at long last, Snart joins the ranks of the Legion of Doom, right as the season only has a couple of episodes left, which is a tad annoying. I guess that Snart’s sacrifice from the climax of last season didn’t want to be too quickly undone, but even so, the sudden re-appearance of Snart is rather anti-climactic here, which is the sole noticeable weakness of another really great episode of Legends of Tomorrow. The Legion apparently just plucked Snart out of time simply because they felt like it, completely off-screen and without warning. This has Snart’s return to the DC Television Universe, now freshly evil again, feel like it lacks fanfare or real impact, and that’s really disappointing.

Mick is nonetheless deeply affected though, and quickly, cracks begin to form in the team’s ranks, as Amaya in particular almost gives in to the temptation to wield the Spear of Destiny against the Legion, wanting to erase them from reality. Sara does manage to talk Amaya down, thankfully, and Tolkien points everyone to the location of the map to the Blood of Christ, which is hidden in a nearby ruined chapel. Things only get worse however after it comes out that Mick accidentally blabbed the Legends’ plan to Snart, believing him to be a hallucination. This has everyone on the team ganging up on Mick and accusing him of being disloyal, which creates a tragic self-fulfilling prophecy later, after the Legends successfully negotiate a temporary cease-fire between the allies and the Germans, only to be cornered by the Legion after they finally find the Blood of Christ. 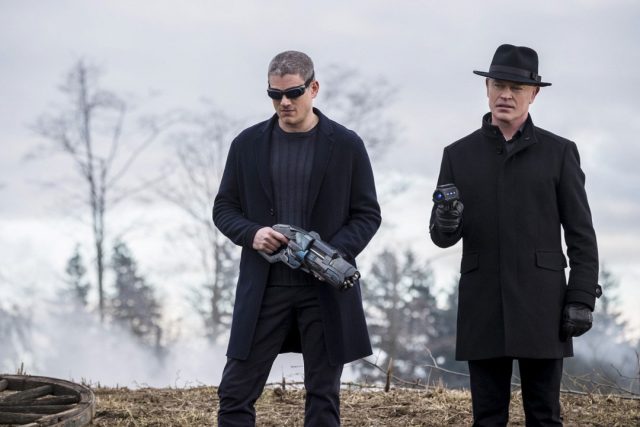 Turns out, questioning Mick’s loyalties was a big mistake, as it’s exactly the catalyst that has Mick deciding to take the Spear of Destiny over to the Legion, joining their ranks so that he can reunite with Snart. This feels like a shocking, heartbreaking, and yet inevitable betrayal, considering that Heat Wave very much remains a clear and present villain throughout DC Comics lore. Once Snart triggers conflict again, the Blood of Christ is even destroyed in the chaos, completely leaving the Legends without a means of destroying the Spear, and forced to retreat back into the Waverider. This has the heroes reflecting on how they never truly trusted Mick, and only have themselves to blame for his betrayal, which, frankly, is pretty much true. There’s not going to be much time to lament though, as the Legion, plus Mick, all come together to use the Spear, which ends the episode, likely setting up for some big reality-bending shenanigans in next week’s episode!

“Fellowship of the Spear” took Legends of Tomorrow into heavier, darker and more depressing territory this week, though as usual, the show continued to deliver the desired impact on pretty much all fronts. Snart’s random, hasty re-appearance on the show, and the DC Television Universe in general, really could have been set up and executed better, but Mick’s shocking betrayal was definitely a big, heartbreaking twist, especially when it directly leads into the Legion getting the completed Spear of Destiny. It’s possible that Mick’s betrayal may not stick, which would be a tad disappointing, but I guess we’ll have to wait and see what happens next week. After all, the reality of the Legends is bound to look a lot different the next time we see them!

Legends of Tomorrow 2.15: "Fellowship of the Spear" Review
Legends of Tomorrow got darker and heavier this week, presenting another standout episode full of drama, shock and betrayal in the final race to neutralize the Spear of Destiny.
THE GOOD STUFF
THE NOT-SO-GOOD STUFF
2017-03-22
90%Overall Score
Reader Rating: (0 Votes)
0%