Almost everyone who games — and even many who don’t — happen to be aware of Gears of War, Epic Games’ prolific, machismo and uber violent third-person shooter series. However, that isn’t the only great shooter to have come from Epic in recent memory. Bulletstorm, which was co-developed by People Can Fly and originally released back in 2011, is also right up there in terms of fun, immersion and all around badassitude, thanks to a witty and addicting campaign that adds a sporting twist to things.

Manly to the max, Bulletstorm — which has now returned as Bulletstorm: Full Clip Edition, for Xbox One, PS4 and PC — is a game that you won’t soon forget. It tells the story of one Grayson Hunt, a paid mercenary who’s out for revenge after being betrayed by the man he once served. It won’t be an easy quest, though, because lots goes wrong and various types of soldiers, cultists and deformed creatures stand between Gray, his allies and their bloody goal.

The seven to eight hour-long campaign begins aboard a space ship, where an intoxicated Grayson is co-interrogating an enemy bounty hunter with the help of an even more inebriated friend. They’re on the hunt for information, you see, as this isn’t the first time that someone has come to claim the billions in bounty dollars that have been put on each of their heads. Who’s calling the shots, and his whereabouts, are the required information.

As can be expected, things don’t go as planned. First, the bounty hunter does his best to blow up the ship. Then, as its crew sends it into overdrive, it encounters another vessel; this one containing a large army and its leader, the targeted Star General Serrano.

This unexpected meeting of ships doesn’t cause the group of ex-militants to shy away from confrontation as one would expect. No, it’s seen as an opportunity, and a plan to Kamikaze the hell out of the bad guy’s digs is quickly hatched. Things don’t go as planned, though, because the resulting collision doesn’t kill who it was intended to, and ends up causing both groups to crash land on a dangerous alien planet. 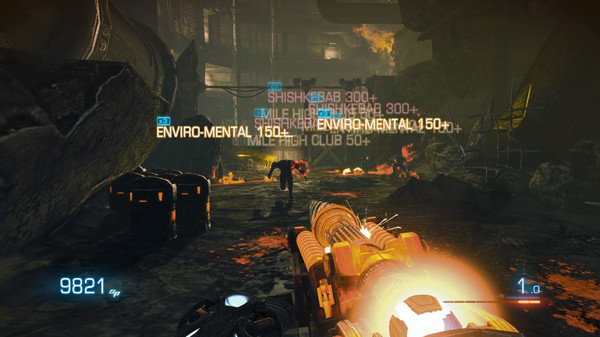 Although Bulletstorm: Full Clip Edition may, at first, look like a traditional first-person shooter, there’s more to it than that. While it does maintain all of the staples that make the genre so enjoyable, its gameplay is actually more about skill and variety than simply killing everything in sight. That’s because things are built around a system of skill shots and skill points, both of which have to do with how you kill and what your reward will be for doing so.

Think of things like an NFL team’s playbook, where various different plays are available for the choosing, yet all happen to have similar end goals. Sure, Grayson and co. need to kill everything that stands between them and General Sarrano, but how each player goes about that won’t be the same. Simply put, each kill is a new opportunity for creativity, and trying new things will reward you with more and more skill points, which are used to upgrade weapons and purchase their necessary ammunition.

Kill shots, you see, are creative forms of murder, and there are a lot of them. In fact, each weapon has its own list, as does both the environment around you and Grayson’s trusty leash, which can be used to pull enemies (or explosive items) closer, so that you can shoot or kick them into hazards. Consuming alcohol to the point of inebriation also boosts your score, which is nice, especially since Grayson is a cheap drunk who has a hard time walking straight after just one beer.

Examples of these visceral death-dealers include kicking grunts into oversized cacti, electrical wires, fires and giant venus fly traps; turning foes into goo by flattening them with explosive hot dog carts and metal doors; impaling enemies on spikes; blowing their body parts clean off with a shotgun and using an explosive belt gun to trap, then explode large groups of baddies. These are just a handful of the options you’ll have in game, though, as there are far too many different skill shots to list. What’s great, though, is that the menu keeps track of them all, including some that you’ve yet to try.

While Hunt’s arsenal could be larger, it offers enough to get the job done in visceral and bloody fashion. There’s the ever-important assault rifle, the necessary pistol, the always powerful shotgun, and a sniper rifle that has controllable bullets. They’re joined by a few more unique offerings, including a bouncing grenade launcher and the aforementioned explosive belt gun, which shoots chained boomers that tie up those they hit. Most of the above are upgradeable, too, offering charged ammunition types that can cause extra damage and earn you extra points. The pistol’s charge shoots a flammable flare, the sniper’s offers explosive bullets, and the grenade launcher’s charged grenades explode with every bounce. 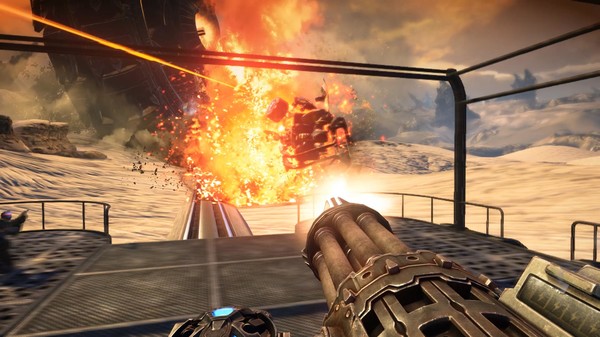 It’s the leash that truly makes Bulletstorm feel different, though. Being able to pull an enemy towards you provides great fun and lots of opportunities, but it also shakes things up in terms of variety. Its best quality, though, happens to be its charged thumper move, which allows the player to slam his leash downward and send nearby enemies flying upward as a result. This can sometimes lead to some awesome skill shots if said enemies hit a low ceiling, but it’s most helpful because every foe that gets sent into the air is frozen in time for a short period. As such, you’re free to try to kill them as you please, before they come plummeting back down to the ground.

You’ll also want to kick enemies into as many things as possible, because seeing them get impaled, eviscerated, electrocuted or set on fire is just as fun as anything else on offer. It’s also one of the best ways to earn points, because said kills are usually worth at least 100 skill points, whereas other options will sometimes offer fifty or less. A basic kill will only net you ten points, so it’s best to avoid those, especially if you want to be able to purchase as much ammunition — and as many charge shots — as you please.

I guess it goes without saying, but I happen to be, and have always been, a big fan of Bulletstorm‘s campaign. Although it drags a bit, it’s a hell of a lot of fun, and an unforgettable experience overall. There’s nothing quite like it out there, either, which also adds to its appeal.

Sure, the plot is basic and ultimately a bit on the forgettable side, but we don’t play games like this for their stories. I mean, nobody expects a first-person shooter to win an award for storytelling, especially not a Gears of War game. That’s not to slight that series or its developers, either; it’s just how it is, as shooters are generally more focused on gameplay than they are on Oscar-worthy narratives. Still, that doesn’t mean that the first-person shooter isn’t one of my absolute favourite genres, along with their third-person peers and western RPGs like Fallout and Kingdoms of Amalur.

In addition to its bloody good campaign, Bulletstorm: Full Clip Edition also offers echo challenge maps and a wave-based co-operative multiplayer mode, complete with mini-bosses. It’s here where you’ll be able to really show off, by posting high scores and showing your friends just how badass you are while playing alongside them. The story mode will always be the main draw for me, though, because I’m much more of a solo gamer than I am a social one, or one who focuses on leaderboard scores. What’s on offer with these two secondary modes is nothing to sneeze at, though, as both are quite fun. They also include all previously released DLC. 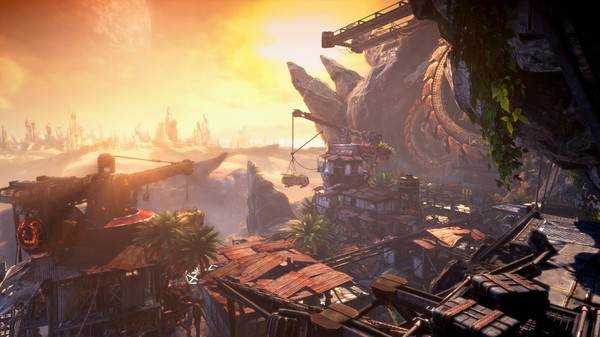 What Bulletstorm: Full Clip Edition brings to the table, though, — at least for those who pre-ordered it — is the opportunity to play through the game as Duke effing Nukem. However, while this sometimes provides a hilarious change of pace, it’s nothing all too special, or anything to worry about if you missed out on pre-ordering. It’s more or less a halfassedly re-skinned version of the core game, which slots Duke in in Grayson Hunt’s place. Sure, some of the writing is comical, and Mr. Nukem’s ability to reference that he’s not the regular protagonist offers a good laugh, but it’s also very evident that he was shoehorned into things. The main dialogue still refers to him as Grayson Hunt, while the lip-syncing can be noticeably off, most of Duke’s lines remain the same as Gray’s, and the gameplay remains identical.

However, although the Full Clip Edition‘s pre-order bonus content is a missed opportunity for greatness, the rest of the package is quite solid. The game — which was quite colourful and visceral back in the Xbox 360 and PS3 days — continues to be quite a looker and doesn’t look dated despite its original assets being several years old. It also sounds good, with lots of colourful and humourous (albeit juvenile) dialogue.

This isn’t the best remaster out there, though, and there are some unfortunate downsides to be found. For instance, the frame rate isn’t as smooth as we’d hoped it’d be, with some heavy slowdown appearing during hectic scenes, as well as some minor hiccups along the way. There’s also a bit of visual pop-in to be found, which is most noticeable during cutscenes. That said, neither of these problems ends up being anywhere close to game breaking, or worth avoiding the game over, and all should be able to be addressed via future patches.

While charging full price for this updated re-release may offend some, Bulletstorm: Full Clip Edition marks the welcomed return of one of last-gen’s most entertaining games. After all, despite being several years old by this point, the core gameplay is just as fun as it once was. For the above reasons, it’s definitely worth checking out if you’re up for some visceral, violent and very bloody first-person shooting.

Bulletstorm: Full Clip Edition Review
Bulletstorm hasn't aged one bit, and remains an absolute blast to play through even six years after its original release. Its Full Clip Edition provides lots of entertainment and content for your money, but has some performance issues.
Storyline66%
Visuals78%
Audio79%
Gameplay85%
The Good Stuff
The Not-So-Good Stuff
2017-04-10
80%Overall Score
Reader Rating: (0 Votes)
0%