The Big Bang Theory coasted on another apathetic filler episode this week, with two disappointing and pointless conflicts that didn’t amount to anything in the end. “The Separation Agitation” nonetheless had some decent humour here and there (plus our latest amusing return for ‘Fun with Flags’!), but it really felt like this episode was rushed and not given much care, especially since the show just seems to be dragging its feet for now, until it can get to the season finale in May.

The main plot of the episode centers around Bert, which isn’t so bad on paper, since Bert can be a really funny character when he’s used judiciously. The core storyline also smartly stems from Bert’s big grant that he got earlier in the season, which he adds to his online dating profile, leading to him getting a new girlfriend. This girlfriend is a dim-witted, but highly attractive blonde, almost like a doppelganger to Penny (which is pointed out by Sheldon), though it doesn’t take long before the group discovers that the woman is primarily dating Bert for his money.

This results in a pretty interesting character conflict for Bert, especially when Raj chimes in with his own dire love life, which has only gotten worse since giving up his own money. When Bert comes to agree with Amy in particular that he should be loved for who he is, not for his money, it gives him the resolve to break things off with his new girlfriend. This is actually a really great and fulfilling character moment for Bert, as well as one that adds a lot of nobility and integrity to his character, and to the idea of a privileged scientist.

That’s why it’s absolutely infuriating that the episode takes the lazy way out with this storyline in the end, and simply has Bert announce that he’d rather date a gold digger than be alone. He then buys the girlfriend a jet ski and gets her back, and that’s the very end of the episode. Seriously? This is incredibly disappointing, since the jokes surrounding this turn aren’t funny, and worst of all, Bert reversing his big decision completely undermines the integrity and honesty that he’d displayed immediately beforehand. This was a complete waste of a storyline that ultimately just gave up, and that’s very frustrating. 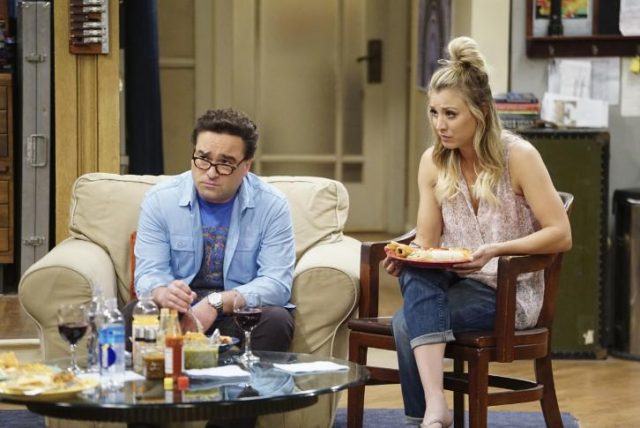 The subplot of the episode fared even worse, sadly. The subplot centers around the Wolowitz family once again, as Bernadette goes back to work, and thus, Halley has to be dropped off at daycare for the first time. Bernadette starts freaking out about abandoning her child again shortly before this, and, I’m sorry, I’m really not buying this separation anxiety with Bernadette, and I doubt many other viewers are either. What happened to Bernadette not being maternal, as established earlier in the show? You can’t just tell me that her maternal instincts suddenly kicked in to the point of completely changing her personality once she had a baby, since that’s a total cop-out. Likewise, Bernadette also understands that this is 2017, and women have careers without hanging around their kids constantly all the time now, right? This is a forced non-issue that even the episode seems to know is ludicrous, since it just abandons the conflict mere minutes after bringing it up.

Bernadette going back to work should be treated as a big moment, but ultimately, the show treats it with a shrug. She just suddenly decides that she’s fine leaving Halley at a daycare, goes back to work, and thus, all of her overblown anxiety about depositing her baby at a daycare amounted to absolutely nothing, retroactively making the Halley storylines of the past several episodes come off as an even bigger waste of time. Howard and Stuart struggle to leave Halley alone at the daycare in a feeble attempt at humour, but this doesn’t go anywhere either, since they just leave the baby at daycare the next day, with their supposed aquarium trip that they took Halley to instead taking place completely off-screen. The writers clearly needed an excuse to offload Halley and place Bernadette back at work for events to come, likely for the end of this season and the beginning of next, so they ultimately seem to have thrown up their hands at doing that efficiently. Instead, they just strung together two separate under-developed story concepts amidst a bunch of lukewarm jokes, and hoped no one would notice. Sorry, but it’s noticeable.

“The Separation Agitation” is a very obvious filler episode that purely exists to plug a space in The Big Bang Theory’s Season Ten order. Its jokes are uneven, its storylines are poorly developed and pointless, and the cop-out ending with Bert’s conflict is especially terrible. Like I said, we’re pretty much just waiting for the season finale at this point, since it seems like the show is fresh out of compelling story ideas for now, beyond what it’s no doubt intentionally holding back for Season Eleven. I can only hope that the apathetic shuffle forward for the Wolowitz family’s situation leads to better humour and tighter storytelling, but considering that Season Ten has been slowing down more than ever lately, I doubt we’ll get much more of that before the season wraps up.