After low viewership and a dismal critical reception to start (albeit one that significantly improved after the first few episodes), it looks like DC’s first primetime half-hour sitcom is going to be giving up the ghost. NBC has confirmed to multiple outlets today that Powerless has been removed from the network’s schedule, nine episodes into its debut season. This pretty much already confirms that the show is dead in the water, with the season’s remaining episodes’ airing dates currently being unknown, assuming they eventually air at all. In place of Powerless’ Thursday night timeslot, NBC has confirmed that it will instead air reruns of Superstore. 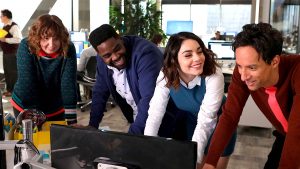 Powerless’ ratings were never great, though NBC nonetheless worked tirelessly to try and save the show, between delaying air dates to polish up scripts, re-arranging episode airing orders, and, most early on, even overhauling the entire premise of the series, resulting in the departure of original showrunner, Ben Queen. Several elements of the show’s production were certainly troubled, especially when viewers seemed to receive the initial unaired pilot better than the official public pilot, after the show’s first pilot effort was screened at several comic book conventions. Originally, Powerless was meant to take place at an insurance company that dealt with superhero-related damage and accidental civilian death, only to be re-tooled into a series taking place at a subsidiary of Wayne Enterprises that instead manufactures products to help protect civilians from superhero battles.

Powerless already seemingly being given the axe also sadly coincides with a major announcement by Warner Bros. Television and DC Entertainment today, wherein both parties revealed that they are launching a DC-dedicated video streaming platform in 2018, which will offer exclusive DC television shows. While it’s certainly possible that this content could eventually include a new DC sitcom, it seems like NBC and Warner Bros. both decided that, considering Warner Bros.’ and DC’s restructuring of their upcoming television distribution model, Powerless was just no longer worth the effort to keep on life support.

NBC has been particularly unlucky with trying to launch DC Universe-inspired television shows, despite both The CW and FOX doing quite well with them, considering that NBC also cancelled the much-loved Constantine after just thirteen episodes a couple of seasons ago, despite its positive fan reception. Said fan reception has allowed NBC’s incarnation of John Constantine to instead live on as part of The CW’s shared DC Television Universe, where he has cameo’d and been mentioned several times on Arrow. There will also be an animated webseries centering on this version of Constantine coming to CW Seed in the near future, after NBC’s Constantine actor, Matt Ryan also voiced another separate animated incarnation of the character in recent DC Original Animation movie, Justice League Dark.

Keep evaluating Eggplante for all major news and updates on Powerless, and other DC television projects.