Jimmy once again ended up taking a bit of a backseat in this latest episode of Better Call Saul, so that we can continue building the partnership between Fring and Mike. In fact, Fring stood at the center of most of this week’s episode, with, “Sabrosito” giving us a deeper look into Fring’s current operation, his growing animosity toward Hector, and finally, the starting stages of his ongoing working arrangement with Mike.

The episode begins by drawing a pretty clear motive as to why Hector despises Fring so much, as Fring starts outperforming him in every respect when it comes to providing and selling product for the cartel overlords. Hector becomes annoyed at this, and as a result, takes a bunch of his men to crash Fring’s public operation as the owner and operator of Los Pollos Hermanos. Fring isn’t there, as he’s instead meeting with emergency workers over a charity effort, but after Hector antagonizes the restaurant and refuses to leave, Fring is forced to check back in with his restaurant branch.

Seeing Fring explain the situation away to his employees made for one of the best examples yet of just how charismatic and assuring Fring is, managing to seem like an upstanding guy, even within a despicable business. Fring is clearly an ingenious businessman, managing to give his employees enough compensation and assurance so that they don’t ask questions about Hector’s intimidation, while also not necessarily lying to them. The clear illustration of how Hector and Fring became such passionate enemies should prove especially rewarding to Breaking Bad fans as well, who know where these characters’ fates eventually take them in the future.

Despite Hector seemingly being unsuccessful when it comes to strong-arming Fring into getting out of his way, Fring nonetheless is subtly rattled by Hector’s brashness, and goes to Mike to try and hire him for more disruptions to Hector’s business. Of course, we know that by the time the events of Breaking Bad unfold, Mike will essentially be Fring’s right-hand fixer, and seeing Mike’s honour develop with Fring’s business savvy is proving to be very interesting. As much as this is supposed to be Jimmy McGill’s show, it’s nice that Jimmy being upstaged in his own series is finally feeling a bit more forgivable, to a point, even if we did still get disappointingly little movement in the main Jimmy storyline this week. Oh, and on one last note, I must say that Fring revealing his reasons for not wanting Mike to kill Hector, namely because, “A bullet to the head would be far too humane”, proved to be one of the best moments in this whole episode! 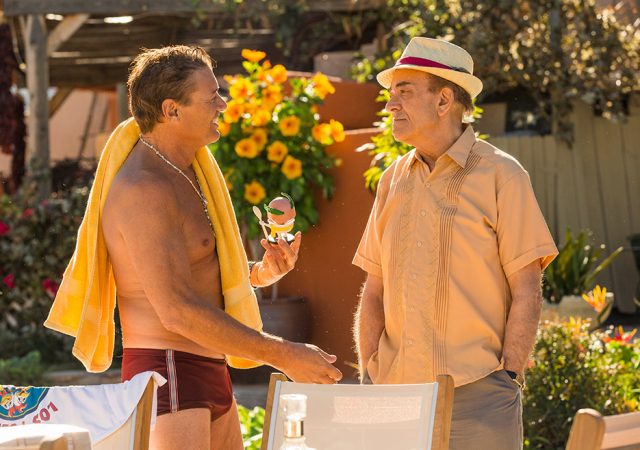 Still, Jimmy and Kim nonetheless use a home repair appointment to send Mike over to Chuck’s house, where Mike can photograph evidence that be used for helping to develop Jimmy’s defense case. Mike using power tools to keep Chuck at bay is clever, with Jimmy and Kim not having much trouble getting what they need, before they’re called in to the initial meeting to finalize Jimmy’s confession. Contrary to how last week’s episode seemed to unfold, it looks like Jimmy and Kim are taking the confession deal after all, though considering the comments that they made at the end of last week’s episode, one has to wonder if they both have some ulterior motive to make these events come back on Chuck in the end.

Finally, the hearing itself was a great testament to the legal prowess of all parties involved. There were a lot of great subtle hints about what each character might be conspiring towards, with only prosecutor, Hay seemingly being fully on the level for now. The underlying plots of both Howard and Chuck as well as Jimmy and Kim present lots of intrigue for the rest of the season, especially when Kim manages to coax out of Chuck that he made a duplicate tape, and is hiding it somewhere. Apparently, Jimmy destroyed the duplicate, with the original tape being withheld specifically for the express purpose of disbarring Jimmy. As Kim meets Jimmy to exit the building amidst the end of the episode, she then appears to indicate that these remarks gave her exactly what she needed. If ever you needed proof that Jimmy and Kim are working towards their own agenda to turn Chuck’s vendetta around on him, here it is!

Again, Jimmy is feeling a little upstaged within his own show for the latest time this week, but an episode that was heavy on Fring still isn’t exactly a bad thing, considering how pivotal a villain he is in the Breaking Bad universe. Seeing the early seeds sewn for Fring’s allying with Mike, as well as his hatred for Hector, made for a strong first half to the episode, and even the lesser Jimmy storyline in the second half still offered its own batch of intrigue as well. Seeing the wheels subtly turning on both sides of Jimmy’s case is very interesting, as the McGill brothers move to try and discredit, albeit not destroy the other. Jimmy appears to be playing into Chuck’s hands for now, but it’s no doubt another ploy towards something greater. Considering that Jimmy is the man who will one day become Saul Goodman, Chuck may just be fatally underestimating his adversary!