Lucifer is racing towards Season Two’s climax with the assembling of the Flaming Sword this week, and that race hit a fantastic high note in the latest episode, as Lucifer, Amenadiel and Mama Morningstar close in on the final piece. “Sympathy for the Goddess” served as a fantastic lead-in to next week’s season finale, boasting excellent humour, along with a very cool case-of-the-week, as the final Flaming Sword piece becomes incorporated into the LAPD’s latest murder case.

After Mama Morningstar negotiates with a smuggler for the alleged final piece of the Flaming Sword, with Mama Morningstar almost being conned out of a bunch of money before the smuggler turns up dead in a nearby room, Lucifer ends up saddled with his mother’s help investigating the incident, as is Chloe. Bringing Mama Morningstar fully into the case-of-the-week once again is overdue, and Tricia Helfer didn’t disappoint when it came to making this latest murder case especially fun and noteworthy! 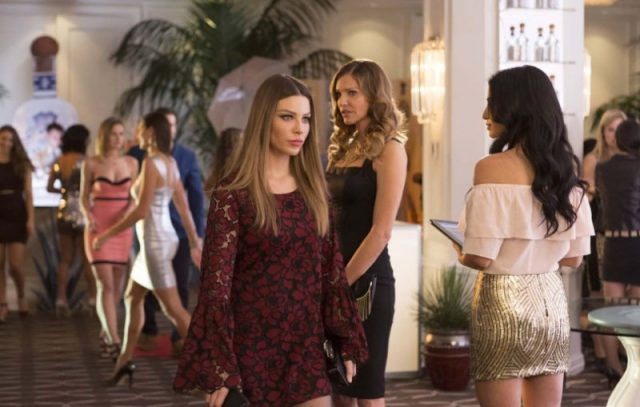 Also helping on this note is the fact that a seemingly open-and-shut murder case eventually gives way to the revelation that the son of a powerful crime boss named Bianca Ruiz is behind the killing. This provided a worthy obstacle for both Mama Morningstar and Chloe in Ruiz, even as the latest murderer proper proves to be a dimwit and a total amateur, one who even leaves his phone at the scene for Ella to try and decrypt. The LAPD doesn’t manage to break in, but they do manage to leverage Mama Morningstar’s connection to Ruiz to make their arrest in the end, in a fairly exciting final climax!

The thrills didn’t stop there either, as the murderer later visits Mama Morningstar, and attempts to stab her dead, believing that she ruined his life by having his mother arrested. Rather than Mama Morningstar sustaining any real harm though, the guy instead gets a face full of holy light, burning most of his skull off and killing him. It turns out that Mama Morningstar’s ‘injury’ isn’t so much about her dying as it is becoming a very powerful and dangerous force to be wandering Earth. This will inevitably serve as a key story device in next week’s season finale, especially since merely seeing Mama Morningstar’s divine light appears to be lethal, in a cool Raiders of the Lost Ark-esque throwback to Old Testament lore.

This episode also boasted an excellent subplot with Maze and Linda, especially when it carries over from the events of last week’s episode so effectively. It was both satisfying and logical for Linda to suffer professional consequences for helping Lucifer bust out God Johnson last week, and she ends up getting her therapists’ license suspended because of this. This enrages Maze, and prompts her to confront Lucifer about his callousness, leading to a hilariously overblown punching match between the two in broad daylight! It may feel illogical that no one noticed this, but the show played it off to make it part of the joke pretty effectively, as even Lucifer and Maze in a public melee is portrayed as seemingly rather mundane by the standards of downtown Los Angeles. This humour also led well into a surprisingly dramatic resolution, as Lucifer must take responsibility for managing to hurt Maze’s feelings about leaving to Heaven, while also having to answer for manipulating both Maze and Linda to serve his own agenda with getting rid of his parents. Maze pointing out that Lucifer is ironically no better than his parents in this respect was a great highlight moment in this storyline!

Amenadiel also got lots of standout material in this episode, between a shocking revelation at the end, and a surprisingly heartfelt bonding moment with Dan, as the two talk about their mutual struggles and losses at a bar. The bar scene didn’t have much direct influence on the episode’s progression, but this character moment between the two men felt very well earned and executed. There are indeed a lot of parallels between Dan and Amenadiel, as they both struggle with being the inadequate losers that they believe they are. The two finding comfort and inspiration in each other was a great way to renew their resolve to press on with their lots in life. This nicely influenced viewer expectation for the episode’s conclusion too, as the item that Mama Morningstar was negotiating for is revealed not to be a direct piece of it, but a book that gives information on where to find the last piece. Turns out, God entrusted the key to the Flaming Sword to his favourite child, but as much as Amenadiel believes that to be Lucifer, it’s actually Amenadiel himself that holds the key, in the form of the necklace he’s always worn!

This reveal with Amenadiel was a great drawn-out payoff for Lucifer, ironically making the final key to activating the Flaming Sword hide in plain sight. It also proves to Amenadiel that he’s not worthless, and that his father had a plan for him as well, just as he does with Lucifer. Of course, this might possibly have God already anticipating Lucifer, Amenadiel and Mama Morningstar storming Heaven soon, but I suppose that’s a problem for next week’s season finale. For now, “Sympathy for the Goddess” serves as another high point for Lucifer’s second season, and helps to create assurance that the show’s second season finale possibly won’t suffer as much as feared by fans next week, considering that Season Two was forcibly shortened by FOX during Lucifer’s Winter hiatus. With the show riding high at this point though, and Mama Morningstar about to become infinitely more dangerous, the show’s second season should at least offer plenty of excitement in its final episode soon!

Lucifer 2.17: "Sympathy for the Goddess" Review
Lucifer soared to another superb high point this week, as Mama Morningstar teams up with Lucifer and Chloe to bring down a dangerous crime boss.
THE GOOD STUFF
2017-05-23
96%Overall Score
Reader Rating: (0 Votes)
0%