The Flash has done a great job of once again fully finding its stride after an otherwise weaker season over the past several weeks, and that gave some renewed hope to this week’s season finale. “Finish Line” doesn’t totally stick the landing for the occasionally clumsy Season Three of The Flash, since it’s weirdly paced, and forces a dramatic conclusion that feels like it comes out of nowhere, as a forced means to create some fan-baiting drama for the Summer break before Season Four starts, but most of the episode is still fairly strong.

Speaking of fan-baiting drama, you might be interested to know that the show does indeed backpedal on the Iris death pretty fast. A character still dies, but it’s not Iris, as that convenient form-switching technology was swiped and used by H.R. to mask himself as Iris, so that Savitar kills him instead. This is in response to H.R. accidentally outing Iris’ location to Savitar, with H.R. performing this one final act to redeem himself, and give Barry a fighting chance against his time remnant. The passing of H.R. is effectively emotional, even if it might have meant even more if Tracy wasn’t so quickly tossed in towards the very end of the season, since the tragedy of their relationship ending before it even started is hurt a bit by how quickly the romance blossomed and ended.

There’s no time to mourn H.R. however, as Team Flash has to put a plan into action to finish off Savitar once and for all. Now that Barry no longer goes down the dark path of hatred though, Savitar already doesn’t have long to live, since the coming time paradox will soon erase him from existence. Savitar not immediately vanishing is kind of a stretch, considering that Eobard Thawne disappeared immediately after Eddie Thawne’s suicide at the end of Season One, but I suppose that the DC Television Universe is now operating on the rules set by Legends of Tomorrow, namely that time, when altered, takes a bit to actually cement and become permanent. I guess that’s fair enough, especially since H.R.’s sacrifice immediately stopping Savitar probably would have been too easy.

Considering the fact that H.R. sacrificed himself to save Iris, yet can’t be mourned until the denouement of the episode, while the final confrontation with Savitar had to be held in the climax, but not before, you can imagine that the structure of this episode of The Flash is a little wonky. There’s even an awkward interlude before the final battle, whereupon Barry decides to appeal to Savitar with love rather than hate, namely by bringing him to S.T.A.R. Labs to try and save him from his impending fate. This whole section of the episode felt a bit problematic, since Savitar suddenly and unrealistically playing nice, even for just a little while, felt rather contrived. He does eventually betray Team Flash, speeding out of S.T.A.R. Labs right before the Philosophers’ Stone’s stored energy blows up and somehow doesn’t take out the building (huh?), but if this show is going to kill Savitar with kindness, it needs to do it all the way, not take a half-measure. 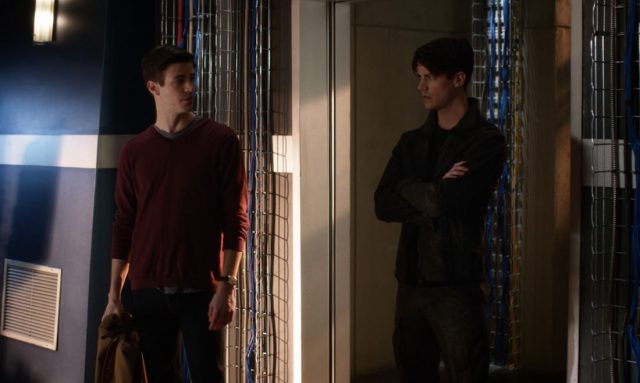 Regardless, we do eventually get our final battle with Savitar proper, after Savitar forces Cisco to modify the Speed Force Bazooka to allow him to replicate himself infinitely across time. Yeah, I know, just go with it. It’s the DC Television Universe, and frankly, stranger things have happened with its major villains. In any case, Barry, Wally and the rest of Team Flash come to face off against Savitar and Killer Frost, resulting in admittedly a pretty awesome final duel for the season, at least for television standards. Jay even comes out of the Speed Force, since Cisco modified the Speed Force Bazooka to blast him a way back (again, just go with it), helping Barry take down Savitar. Surprisingly though, it’s Iris that deals the final blow, shooting Savitar dead after Barry phases into Savitar’s armour (he couldn’t do that before??), right before Savitar finally breaks apart because of the time paradox.

This is all pretty nuts, but surprisingly, the show wasn’t done with big developments here. The funeral for H.R. is the heaviest that the rest of the episode got though, as it soon after gives way to a nice happy ending for the season, even for Caitlin. Surprisingly, Caitlin rejects the cure that Julian builds for her, saying that Caitlin is dead, but she’s also no longer fully subject to her Killer Frost personality. Honestly, this felt like a bit of a cop-out, since Caitlin overcame her Killer Frost side disappointingly easily in the end, but it will still be interesting to see what happens next with her character, as she opts to exist somewhere between the state of being Caitlin Snow and being Killer Frost, going forward. The show also felt like it had to do some blatant plot gymnastics to leave something of a cliffhanger ending before Season Four, as the Speed Force suddenly becomes volatile, raining dangerous energy all over Central City. Barry realizes that a prisoner is necessary in the Speed Force, and decides to take Jay’s place, with the Speed Force declaring that his journey is over, as the episode and Season Three end.

Now, before you freak out too much, it’s not all that likely that the show is ditching its lead star, so take a breath. Giving a supporting character like Caitlin an altered and potentially smaller role going forward is one thing, but taking out the show’s lead star, of what’s currently The CW’s highest-rated and most popular series no less, feels like a blatantly bad business decision. The Flash will likely find some way to bring Barry back out of the Speed Force for when Season Four gets going, despite some fan speculation that Warner Bros. wants Barry out of The Flash for at least the front half of the season, due to Ezra Miller’s Barry Allen/The Flash being a lead character in the upcoming Justice League movie that’s releasing this November. While it might be interesting to have Wally be this show’s lead character for a bit, I have to stress a bit, since I doubt that The CW would risk losing all of the Grant Gustin fans that are primarily watching The Flash for him. There’s also the matter of how much the show has built up DC super-villain, Clifford DeVoe/The Thinker being a significant enemy to Barry soon, likely as the big bad of Season Four. It would feel like a colossal disappointment to foreshadow that confrontation so much, but then ultimately dump DeVoe on Wally.

“Finish Line” still managed to be an overall solid season finale for The Flash in the end, despite some of the story contorting to trigger a worthy final battle against Savitar, plus a worthy excuse to take Barry out of action for the Summer break. H.R.’s sacrifice saving Iris in the end though, plus Caitlin resolving to find a renewed place in the world after overcoming her Killer Frost side (even if that happened unrealistically quickly), gave the season a nice emotional round-off. The pacing issues in this season finale are a bit of a bummer, but the fact remains that The Flash certainly ended its current weakest season a lot better than Supergirl did with its own season finale yesterday. It’s likely that Arrow will probably stand alongside the previously wrapped Legends of Tomorrow as having the strongest season climax out of The CW’s current quartet of DC shows, but I guess that’s a matter for tomorrow. Frankly, I’m just happy that The Flash at least managed to end Season Three on a better note than it started on.