Silicon Valley took a breather with something of a smaller episode this week, as Pied Piper faces a quick obstacle, presumably before Season Four starts moving towards a climax over the next three weeks. “The Patent Troll” aptly pitted Richard against an elderly man that tries to shake Pied Piper down for money after they break into one of Hooli’s mobile app sales charts, while a few other characters underwent their own disconnected subplots.

Not many of these events had much over-arching meaning when it comes to the show’s larger ongoing canon, but it was still funny to enjoy some more laid-back shenanigans with the regular Silicon Valley cast this week. The only character that may have possibly made a significant change is Erlich, as he successfully talks Monica and Laurie into hiring him for their fledgling new investment firm. That said though, since we know Erlich is leaving the show after this season, this new job placement could very well not last long. 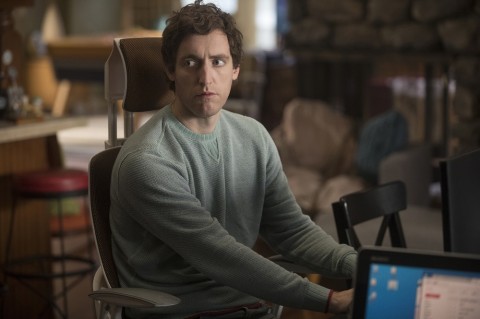 We did however get another story element with Erlich this week, after Ed Chen invites him out to join him, “On the floor” at a basketball arena. Mistaking this invitation for the chance to watch a game, Erlich soon learns that Ed was actually referring to playing basketball with himself and several other VC buddies. Since Erlich is overweight, hates basketball and barely knows anything about teamwork, he does whatever he can to sneak around Ed without looking bad, eventually having to man a scoreboard at the end of the episode. It might have been more interesting to see Erlich suffer some actual comical consequences for trying to dodge the basketball match, but at least this was another funny way to poke at Erlich’s laziness, especially when even Jian-Yang is now starting to mock him for being, “Fat and poor.”

Speaking of Jian-Yang, he decides to buy a smart fridge for the house, which he can apparently afford, despite its massive $14,000 price tag. This results in another subplot with Gilfoyle at the center, as he tries to hack the fridge on account of it annoying him. Again, this storyline didn’t have much of a point, but it was amusing to get our latest look at just how far Gilfoyle will go to stick it to someone that gets on his nerves. The target of Gilfoyle’s machinations not being Dinesh for once was also a pretty welcome switch, spreading the love (or the hate) around a bit more, especially when Gilfoyle inevitably does succeed, and manages to hack the fridge to be vulgar and insufferable to Jian-Yang, complete with failing to spell his name correctly.

Among the character subplots though, by far the funniest and most amusing was Jared’s subplot, after Dinesh advises him to do an Ed Chen impression to get through a difficult Microsoft telephone holding pattern, at which point Jared invents a fictional supervisor persona named Ed Chambers. Whenever Jared is forced to deviate from his usual calm, subversive demeanour, it pretty much always delivers excellent laughs, and that remained true here! Seeing a suddenly tough, cool and assertive Jared was very, very funny, especially when Jared starts acting like, “Ed Chambers” is a real person that is truly part of Pied Piper’s workforce. His confession at the end of the episode to Richard that he had to fire Ed Chambers was hilarious icing on the cake, as Richard must try and point out to an oblivious Jared that Ed Chambers was never a real person. I suppose he was real enough for Jared however, especially since Jared will no doubt be back to his usual put-upon self in next week’s episode.

This just leaves the main plot of the episode, which has Richard and Pied Piper shaken down to the tune of $20,000 by the titular patent troll, who willfully manipulated the legal system to buy up broad patents that he can use for easy money. Richard wants to stand up to the guy, against the advisement of Jared and Ron LaFlamme, with Ben Feldman making an overdue guest appearance this season at last, after he’s since gone on to star in NBC sitcom, Superstore. Richard tries to rally other storage companies against the patent troll, though they end up screwing him over, only making the shakedown larger. Still, the resolution of Richard using his old music copyright searching idea from Pied Piper’s origins to get the patent troll off his back was a great and surprising final result. Richard didn’t completely get off the hook unscathed though, since it turns out Ron’s fee was just slightly over the amount he would have had to pay to the patent troll, so he nonetheless ended up losing money for Pied Piper. This was a superbly funny way to end this storyline, since Richard won in the end, while still suffering some funny consequences for his wounded pride.

“The Patent Troll” reduced the scope of Silicon Valley’s usual events to a noticeable degree this week, but for the most part, the standout laughs that it focused on came pretty frequently. Even though Erlich’s and Gilfoyle’s subplots didn’t stand out quite as much, they were still plenty funny, even if Jared’s fictional alter-ego and Richard’s quest to strike a blow for Pied Piper’s pride clearly stole the episode. I have to wonder how Erlich taking a job at Bream-Hall will pan out, since his character won’t be sticking around past this season, but at the very least, it should hopefully give us some satisfying new story directions for Erlich before he exits the show. Then again, if Erlich’s final fate is simply to be incessantly mocked by his old nemesis, Jian-Yang over Season Four’s remaining three episodes, I’d probably be content with that as well.

Silicon Valley 4.7: "The Patent Troll" Review
Silicon Valley took a breather with a more small-scale episode this week, though one that still delivered a good selection of amusing storylines.
THE GOOD STUFF
THE NOT-SO-GOOD STUFF
2017-06-05
83%Overall Score
Reader Rating: (0 Votes)
0%