After kicking off Season Three with a pretty exciting first season premiere episode this week, the second season premiere episode of Fear the Walking Dead also turned out really well. The action was more diminished in this second offering, “The New Frontier” (sadly, its new characters and camp have no relation to Telltale’s episodic adventure game, The Walking Dead: A New Frontier), but the drama nonetheless worked very well, especially when the episode begins with a huge left-field turn that will definitely have massive ramifications for the remainder of the season!

The episode begins with the helicopter that Alicia, Travis and Luciana are riding in, alongside Jake Otto, suddenly taking fire from an unknown attacker. Why some wingnut is shooting at this chopper and how is never explained, though this will possibly be addressed later in the season, when we inevitably have to create an obstacle for the show’s new camp. Regardless, there are surprising consequences for the helicopter being attacked, since not only does the chopper go down, but Travis also takes a bullet in the neck, before opening the door and dropping out the side! 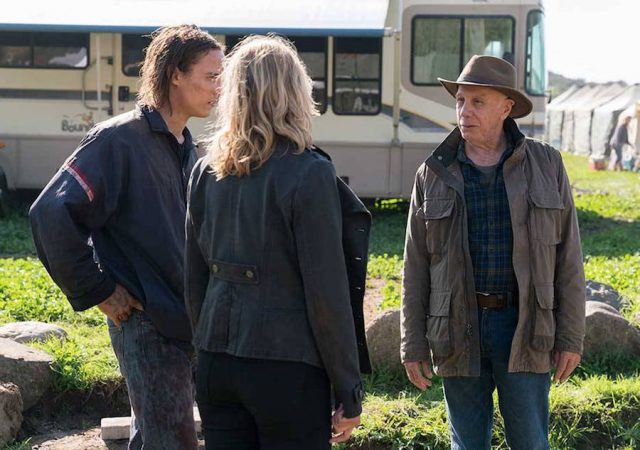 Travis’ death was a huge shocker, and one that keeps the stakes of Season Three’s opening feeling like they’re flying high so far! The effect that this will have on the Clark family is bound to keep the season plenty interesting, especially as it only seems to bring out Madison’s dark side all the more, once she finds out what happened. That said though, the actual Travis death and how it was executed was very contrived, which is a definite downside to an otherwise good episode. Considering that Jake and Alicia run afoul of Walkers when they land, why couldn’t Travis have died there? Not only is it ridiculous that Travis opened a helicopter door mid-flight by himself after being shot in the neck, just to have a dramatic death scene, but it also begs the question of exactly how Travis was hit in the neck of all places by a bullet, from the back seat of a helicopter, when the bullets don’t even have a clear trajectory. The only way this makes sense is if someone was firing at the helicopter from the same height, from a side angle, through the exact spot where the helicopter wasn’t reinforced, and how exactly would that work? The bullets coming through the front window of the helicopter mid-flight made even less sense! This whole scene just didn’t add up, frankly.

Beyond the head-scratching logistics behind that attack on the helicopter and Travis dying though, the rest of the episode worked pretty well in virtually all respects. It was very satisfying to have Fear the Walking Dead play against expectation when Madison and Nick manage to reach the camp from their ground vehicle, and have the camp be pretty inviting. After Troy’s Walker experimentation, and all-too-happy desire to kill Travis before he actually ended up dead by other means, you’d think that Madison and Nick would be headed to a pretty dangerous new location. Surprisingly though, they find that the camp takes more after Jake than it does Troy, with Troy apparently being something of a black sheep in the eyes of his brother, as well as his good-natured father, Jeremiah, whom we meet for the first time here.

Jeremiah’s interactions with Madison were a great way to highlight how increasingly detached Madison is becoming from her own humanity, as Jeremiah is welcoming, with Madison meanwhile being suspicious and ready to strike. Surprisingly, Madison is starting to have more in common with Nick than she does with Alicia, and this becomes even more apparent after Alicia is forced to break the news that Travis died on the flight over, which also has Nick forcing the camp at gunpoint to let Luciana into the infirmary. The main Walking Dead series has gone over some of these story beats with Rick Grimes’ crew already, but having the Clark family be the true upset behind the Otto family’s camp would be an interesting turn for Fear the Walking Dead, better completing the family’s transformation into hardened survivors.

We also got a pretty solid subplot in this episode, which came when we finally got a chance to check in with Strand back at the hotel resort. Ofelia’s whereabouts are still unknown for now, but Strand is nonetheless trying to live on at the hotel, eventually lying about being a doctor so that the many people trying to get in for medical treatment can have some hope. Strand’s lie inevitably blows up in his face, and feels a little too short-sighted for his character, frankly, but it did lead to a few legitimately great scenes, especially when he confronts the mother of the bride that Strand euthanized, and got stabbed for. Strand may have been kicked out of the hotel at the end of the episode, but his snatching of a vehicle seems to hint that it won’t be long before he’s back in the company of the Clark family, or possibly Ofelia in the meantime. 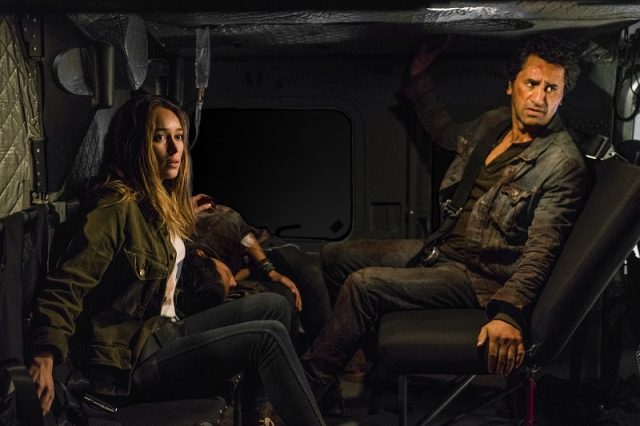 “The New Frontier” had to compromise the story logic here and there, but it did consist of mostly standout scenes that continue to have Season Three of Fear the Walking Dead starting off on a really strong note. Even if his death made little sense, the loss of Travis was a big blow to the show’s family dynamic, and I’m really looking forward to seeing how this shakes up the Clark family’s behaviour and survivor politics. Likewise, it was good to check in with Strand, even if his fib also felt like a considerable stretch, and a fairly transparent excuse to get him out of the hotel. Hopefully, we get a couple of interesting misadventures with Strand before he inevitably returns to the other protagonists, but all in all, Season Three of Fear the Walking Dead is so far nicely picking up the slack for the struggling main Walking Dead series. For the first time, I’m more invested in the Clark brood than I am Rick’s crew!