It’s taken a couple of extra months after the conclusion of this past season of The Walking Dead, but finally, Fear the Walking Dead is kicking off its third season with a two-episode season premiere event this week. “Eye of the Beholder” is the first of the two season premiere episodes, and fortunately, it starts Season Three off on a pretty strong note, as we see the aftermath of the Clark family’s separate captures, following the cliffhanger ending of the Season Two finale from last year.

Turns out, the Clark clan was snatched by a military outfit of sorts that is doing experiments on Walkers, namely by killing prisoners and recording how quickly they turn. These soldiers appear to be conducting various other experiments as well, though Travis ends up tossed in with the prisoners to be experimented on, and this is where he reunites with Nick, now sitting alongside an injured Luciana. The reunion between these two characters is appropriately unceremonious to start, especially in their harrowing circumstances, and this also provides a good excuse for Travis to update Nick on everything that’s happened with his family, since Nick ventured off on his own halfway through Season Two.

Madison and Alicia, meanwhile, get stashed somewhere else, where they meet Troy Otto, one of the major new characters for Season Three. Troy appears to be in charge of the operation, and while initially friendly and approachable, he soon stokes suspicion in Madison and Alicia when Madison demands to be reunited with Travis, and Troy doesn’t seem to want to accommodate her. Troy is naturally up to no good too, since he plans to throw the difficult and unruly Travis into a Walker pit, and this has Madison and Alicia moving to escape, with Madison even jamming a spoon into Troy’s eye in the process, threatening to take the eye out if Troy doesn’t co-operate!

On the one hand, it’s cool to see that Fear the Walking Dead wants to kick off Season Three on an engaging and intense note, and there’s certainly plenty of excitement to be had in this first season premiere episode. That said though, it feels like the show has to awkwardly shift the Clark family’s skill set, namely by cranking it up to unrealistic proportions, in order to boost said excitement. Suddenly, Madison and Travis in particular have become super-dangerous badasses, as if they walked off of Rick Grimes’ crew from the main Walking Dead series, with Travis even taking out an entire pit of Walkers, by himself and unarmed! This may hopefully lead to a more exciting season than the two that came before, but the Clark family suddenly becoming this skilled and this dangerous in the span of about an hour or two feels rather unrealistic and distracting. Moreover, on a slightly unrelated note, if Travis can take out an entire pit’s worth of Walkers without help, why does Nick struggle to fight off just one Walker in an enclosed sewer? 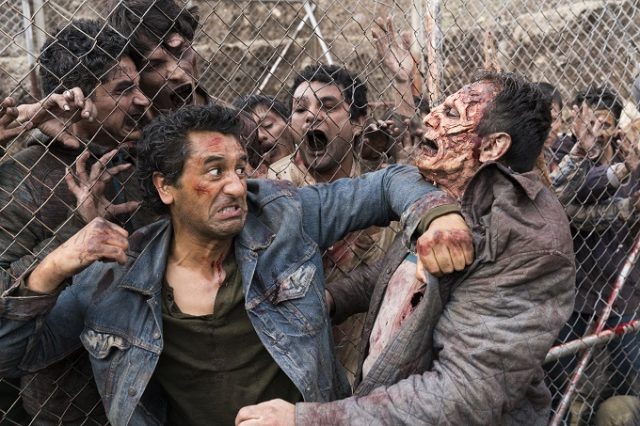 Whatever the case, the Clark family does eventually end up being thrown together again, and this is around the time we meet the other Otto sibling, Jake Otto. Jake seems to be more forthcoming than his brother, and doesn’t seem to be quite so on board with the Walker experiments going on either, creating an interesting new family dynamic that looks like it’s going to be explored throughout the season. This feels like a great idea, and immediately, the Otto brothers feel like effective and interesting personalities. Fear the Walking Dead has stood apart from the main Walking Dead series with its heavier emphasis on family, and placing that focus on some potential antagonists is a smart fit overall.

Of course, after Nick and Luciana accidentally lure a bunch of Walkers into the base’s sewer network, resulting in an admittedly pretty ludicrous sequence of a soldier being pulled through a wall by a Walker to be eaten after a bunch of rats spill out (why exactly did the Walkers not eat the rats? This universe has clearly established that the Walkers feed on animals as well as people!), which is at least charming in its unintentional, awful hilarity. The base is quickly overrun from there, resulting in another convenient separation for the Clark family unit, as Madison and Nick end up having to ride in a jeep with Troy, while Travis, Luciana and Alicia go in a helicopter. The two groups appear to be going towards the same destination however, so this separation may not stick for long. Still, switching up the characters, even temporarily, may not be a bad call, especially since this could give Madison some worthwhile quality time with Nick. 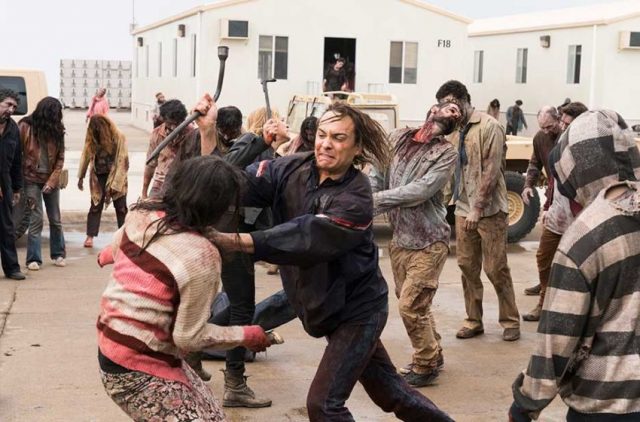 “Eye of the Beholder” made for a surprisingly strong start to Fear the Walking Dead’s third season, suggesting that this show may have officially overcome its recurring issue of plodding, problematic opening stretches from the previous two seasons. The introduction to the Otto brothers and their twisted Walker experiments was a great way to kick the excitement up early, even if it came at the expense of giving the Clark family a rather unrealistic new wave of badass fighting skills. Still, the show managed to deliver on the promise of Season Two’s cliffhanger ending here, and if this momentum can keep up, we may finally have Fear the Walking Dead matching, or possibly even surpassing, the current crop of the main Walking Dead series by Season Three’s end!

Fear the Walking Dead 3.1: "Eye of the Beholder" Review
Fear the Walking Dead's first of two Season Three premiere episodes starts things off strong, as the Clark family end up at the center of some twisted Walker science.
THE GOOD STUFF
THE NOT-SO-GOOD STUFF
2017-06-05
85%Overall Score
Reader Rating: (0 Votes)
0%