NOTE: Spoilers from throughout the third season of, “Gotham” are present in this review

Gotham continues to lean further into a comic book-style direction in Season Three, with its original procedural element being pretty much entirely abandoned at this point. Still, Season Three of Gotham is nonetheless fairly solid overall, even if the show is still going through a few ups and downs between its latest episodes. Some characters made fantastic strides this season, most notably Edward Nygma, while other characters’ storylines, like that of Leslie Thompkins, felt like they crashed and burned, clearly overshadowed by so many other interesting elements in the series that were going on.

Like the previous season, Season Three of Gotham is split into two distinct pods, with the season’s front half comprising the ‘Mad City’ pod, while the back half comprises the ‘Heroes Rise’ pod. In this case, the front half was also often stronger between the two, beyond the aforementioned proper transformation of Edward Nygma into The Riddler this season, and a lot of that was due to a surprisingly strong introduction of another future Batman nemesis, Jervis Tetch, a.k.a. the Mad Hatter. The Walking Dead’s Benedict Samuel portrays an effectively sinister and darkly playful Tetch, making this B-list Batman baddie create much more of an impact than you would expect, particularly since his sister, Alice, whom Tetch seems to have an incestuous fascination with, carries a strange virus in her blood that seems to bring out people’s inner demons.

The Alice Tetch virus is a pretty strong testament to how proudly bizarre Gotham has gotten since its slightly more grounded origins, and it ended up playing heavily into the season, often as a convenient storytelling device. The Alice Tetch virus served as an excuse to twist Captain Barnes into a murderous new villain called ‘The Executioner’, a villain made up for the show that doesn’t exist in DC Comics lore, while also serving as the key means to provide a climactic struggle for the season finale. This struggle also intentionally called back to 2005 movie, Batman Begins, in that it ended up serving as the introduction of another Batman villain, Ra’s Al Ghul, to the Gotham universe, even if his appearance was little more than foreshadowing for likely events to come in Gotham’s future.

Beyond the standout Mad Hatter storylines with Gordon, who once again temporarily finds himself separated from the GCPD at the start of the season, another major antagonist throughout Season Three of Gotham are the Court of Owls, a highly influential and sinister Gotham City villain organization that’s recognizable from DC Comics lore. The Court of Owls often failed to measure up to Mad Hatter however, especially since they ultimately went out as the mere underlings of Ra’s Al Ghul and his plans to re-invent Gotham City, similar to his agenda in Batman Begins most notably, right down to having the city tear itself apart through its own panic. It felt like the Court just didn’t fit that well with the sensibilities of the Gotham universe, since they’re too deeply tied to Batman, who obviously can’t properly exist on this prequel series.

Oh, but speaking of Batman though, the show started pushing Bruce more than ever in that direction, complete with the season ending on a pretty on-the-nose cliffhanger that shows Bruce (or is it his clone?) in a mask and cloak beating up a mugger before overlooking the city from a rooftop, Batman-style. Bruce ended up being a key part of the Court of Owls’ plans for the city, since Ra’s Al Ghul wanted to brainwash him into becoming the leader in a reborn Gotham City, because why not? It felt like Gotham was merely going through the motions with Bruce’s early transformation into Batman, which the series tried to make interesting, but it just ended up falling back on too many familiar beats, and too many telegraphed turns. If that masked Bruce at the end of the season really is the real Bruce as well, and not the clone, that’s an especially awkward transformation of the confused, insecure teenage Bruce into a vigilante, albeit one that hasn’t yet properly taken up the Batman mantle. Frankly, the most interesting Bruce got this season is when he finally got to encounter a resurrected Jerome Valeska during the highlight midseason finale event in January, creating a fantastic early conflict between the future Batman and the proto-Joker.

Still, Gotham continues to do right by its villains for the most part, even though the Court of Owls and Ra’s Al Ghul ended up feeling short-changed in terms of appeal this season. Aside from Mad Hatter, Edward Nygma and Barbara Kean were also big standouts with their own conspiring plots throughout the season, especially when we get a pretty great transformation for Nygma as he fully morphs into The Riddler, realized by a twisted feud with Penguin. Penguin took a bit more of a backseat this season compared to past seasons, but he was also given a surprisingly effective team-up with Ivy Pepper in the back half, who is aged slightly and made more sexualized, after an encounter with one of Hugo Strange’s Indian Hill freaks. The recast 20-year-old-or-so Ivy, now played by Maggie Geha, is more logically moving along to her future villain identity as Poison Ivy, and once Geha was paired with Penguin, her character really became quite fun and entertaining, especially as the series amusingly plays up the angle of Ivy now being a highly attractive grown woman with a little girl’s brain. 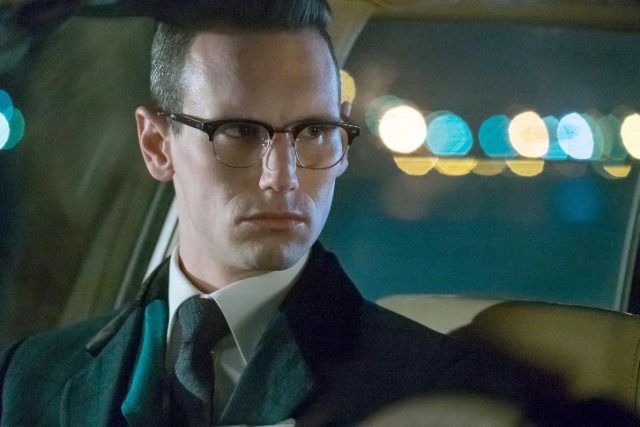 The series is still supposed to be primarily about Jim Gordon however, and Gordon still got the lion’s share of storytelling, even though the season naturally put him back with the GCPD fairly quickly. The show once again tried to heavily explore Gordon’s supposed dark side, through both Mad Hatter and the subsequent unleashing of the Tetch Virus, culminating with Gordon having to fight a direct infection by the Tetch Virus to save the city. This also had to happen via a botched storyline with Leslie Thompkins though, which saw her pursue a vendetta against Gordon after Gordon is forced to gun down her fiance, who also becomes infected by the Tetch Virus, and nearly kills Leslie. Leslie’s fiance being Mario Calvi, the son of Don Carmine Falcone, was sort of interesting, but even Gordon’s feud with Falcone seemed to fizzle out fairly quickly. The season then ends with Leslie leaving Gotham City again, and with Barbara seemingly being killed by Tabitha in the season finale, along with Captain Essen dying last season, it seems like Gordon is officially out of love interests from DC Comics lore at this point. Maybe it’s better that way. Gordon often worked best this season when he was doing his job and working to save the city, not pining for some dysfunctional love.

Gotham more or less kept pace with its previous season in Season Three, namely that the show remains pretty entertaining, even when its storytelling sometimes becomes rather flimsy. Like I said, the ‘Mad City’ pod of the season ended up being a little more consistently good than the more uneven ‘Heroes Rise’ pod, but Gotham is still standing well above its more problematic origins in Season One. The series still feels like it’s trailing many of the other current DC Comics-inspired shows on primetime television for now, though not necessarily by a massive margin. The show sets up some promising teases for Season Four too, as Gordon is finally allowed to stay at the GCPD between seasons, Bruce appears to be beginning to embrace his vigilante side, and the villains move to boost their power all the more after the Court of Owls is seemingly wiped out. We’ll have to see how this all pans out next season, especially with Gotham giving up its prime Monday night timeslot to fellow DC Comics-inspired series, Lucifer next season, so it can move to Thursday nights. With FOX now seemingly fully embracing Gotham as a genre show now, hopefully the move to Thursdays will bring us our most interesting and creative season yet!