Although it was first announced at the PAX East 2017 expo, Scavengers Studio’s The Darwin Project made a brief appearance at E3 today. There, the Montreal-based indie developer teamed up with Microsoft to announce that its unique battle experience will be coming to Xbox One.

Advertised as an interactive battle royale set in the Northern Canadian Rockies, The Darwin Project promises strategical gameplay for seven players. As such, those with interest can look forward to a game that will require them to use their wits as they attempt to survive extreme weather conditions, all while trying to maintain a good mix of offensive and defensive play in order to stay alive. This, of course, makes you think about books and movies like The Hunger Games and its much better predecessor, Battle Royale.

For those who’ve yet to hear about this game, Scavengers’ take on third-person multiplayer battling is set in a post-apocalyptic world where civilization is preparing for the next ice age. To combat their fears and keep the population down (I assume), they’ve created a sport/science project called the Darwin Project, which is essentially a fight for the death in a snowy arena. In order to survive, players will need to set traps, track opponents, craft tools and set up temporary alliances with others. That isn’t all, though, as it’s also been confirmed that each match will feature a show director who is able to influence the action by restricting zones, calling in airstrikes or giving underdogs an unexpected advantage.

What’s also noteworthy about this game is that it hints at the possibility of livestream viewers being able to join into, or at least influence the murderous mayhem of each match. How that works, exactly, has yet to really be revealed, however.

The Darwin Project will be available for demonstration on E3’s show floor, and is scheduled for a 2018 release on both Xbox One and Windows PC. 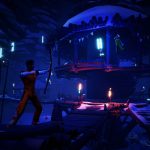