During a short, but exciting digital E3 showcase from Nintendo today, the company announced brand new Yoshi, Kirby and Pokemon games for Nintendo Switch! The Pokemon game will not be the oft-rumoured Pokemon Stars it seems, and will in fact be an all-new core RPG entry in the series! Unlike the other two games however, gameplay for the unidentified Pokemon game wasn’t shown, with The Pokemon Company merely confirming that it’s at least a couple of years away.

The upcoming Yoshi and Kirby games, by contrast, had gameplay videos to demonstrate during the showcase, along with confirmations of 2018 release windows being given for both games. The Kirby game, which is currently without an official title, appears to maintain the series’ usual cute charm and colourful presentation amid another traditional 2D platformer entry, while also promising some kind of co-operative multiplayer component, a la Kirby’s Return to Dream Land for Wii. Kirby also had a new ability shown where he could turn into an iron, with a full team of four players seemingly taking on recurring boss enemy, Whispy Woods as an example of combat-based co-operation. 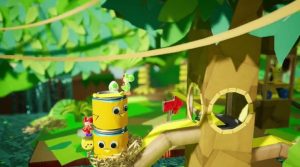 The currently-untitled Yoshi game, meanwhile, re-interprets the vibrant art direction of Yoshi’s Woolly World for Wii U and 3DS, with a new papercraft flavouring in place of the yarn design. The game has Yoshi able to move along a 2.5D plane, complete with being able to occasionally move up and down as well as left and right, and also appears to sport co-operative gameplay capability. A key mechanic in the game also appears to revolve around flipping stages around to open up new paths and reach new collectibles, in a gameplay hook slightly reminiscent of Super Paper Mario for Wii, only with a reversal of the stage, rather than a full shift from 2D to 3D.

We’ll be keeping an eye on these various new Nintendo Switch games, so keep switching to Eggplante for all major news and updates on Nintendo Switch and its high-profile game releases.