Crackdown is a series that began as little more than a carrier for a Halo 3 demo, but has evolved into so much more. While some, perhaps most, of those who bought Crackdown back in 2007 really did so to get access to Halo 3, the game has developed a cult following which further developed into an almost mainstream love of the game.

Fast forward a decade, and Sumo Digital, has crafted a world that is two and a half times larger than the original game, and made sure to deliver it in 4K (at 30 frames per second) with full HDR support on Xbox One X.

We got hands-on with the game at E3 2017, and while our play through was in a sandboxed area with an increased amount of content given our limited time to play through the game, we also got to see a version of the game played with a completely open world.

Crackdown 3 takes place on a single (albeit massive) island built on a volcano, whereby everything on the island–companies, infrastructure, people, and security–is controlled by a single corporation, Terranova. You’re fighting for The Agency, a group of people searching for the weapon crafted by Terranova that has the capability to take down entire cities.

Since you’re on an island entirely overrun by Terranova, you’re trespassing on the area. There are no safe houses, no bases, no havens; you’re alone and you have to fight your way to uncover the roots of the weapon and destroy the organization that runs the island.

With everything open from the start, Crackdown 3 gives players a ton to do. There isn’t anywhere you can’t really go. In fact, if you’d like, similar to Zelda: Breath of the Wild, you can theoretically head straight to the kingpin in the game for a battle. Granted, you’ll need to know where to find them, and are likely to get your ass handed to you once you get there (if you don’t die along the way, of course), but players are welcome to try.

The open world feels very similar to Grand Theft Auto in its ‘go anywhere’ nature, though that doesn’t mean there is actually that much to do. In fact, the world seems quite barren compared to a game like GTA, though that isn’t necessarily a bad thing. While the title is open world, that does not mean it is designed to be a ‘do anything’ type of game. Crackdown 3 does an excellent job of focusing its core gameplay to shooting, looting, and traversing the world in as quick a manner as possible. 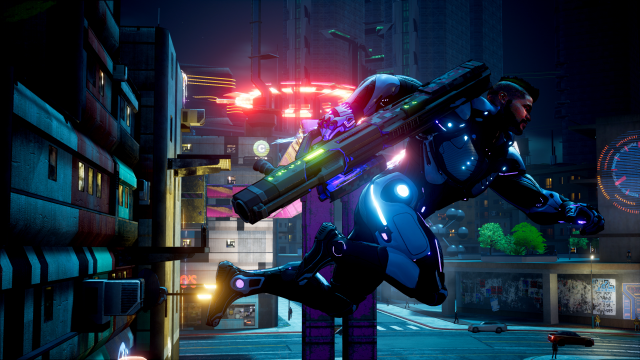 Four massive monorail loops encircle the island, each of which has stations that need to be destroyed in order to take advantage of the transit structure. Once the player manages to take out all the stations on a single loop, the monorail becomes theirs to use for even faster travel as well as to obtain weapons and technology left behind by the guards that protect the area.

As the player progresses from one station to the next on that same loop, the combat scenario becomes more and more difficult, scaling upwards over time, providing additional challenge rather than simply a quantitative one.

There are also scaled police forces throughout the game. The Enforces are the Terranova police, but they come in many varieties. Enforcers proper are like city cops; they’ll attack if they see you given your trespassing nature, but they’re relatively easy to get rid of. Tactical enforcers are much more similar to special forces and require a bit more finesse and strategy to take out, but they’re not the end of the road. Riot police are the biggest threat in the game, short of the game’s bosses (which take the form of kingpins such as the leaders of gangs or other organizations), and they’re the most difficult to eliminate but also leave stronger weapons behind, as one might expect.

Gameplay in Crackdown 3 is decidedly Crackdown; it’s a very fast-paced, escalated rhythm that can be difficult to adjust to for players who may be used to something that takes itself a bit more seriously. But that’s not what it’s designed to do. Crackdown is and always has been a game that is, by its nature, a bit more fun, a bit more flighty, and entirely more fun as a result.

Crackdown 3 hits the Xbox One X simultaneously with the console’s launch on November 7th. It will also be available on Xbox One and Windows PC on the same date.