Fans of Seth Rollins will be happy to hear that the “King Slayer” is set to become the next cover athlete for his sport’s annual series of video games. This was confirmed today, alongside an expected October release date for WWE 2K18.

Three different versions of the upcoming wrestling game have been announced, although only two have been detailed at this point in time. Those are the regular and deluxe editions, the latter of which includes digital bonus content alongside the season pass and early access. A special, physical-0nly collector’s edition, has also been announced, though pricing and content details have yet to be revealed.

When it launches on October 17th (or October 13th, for those with early access), wrestling fanatics will be able to play a game that promises to “bring you closer to the ring than ever before.” WWE 2K18‘s press release also boasts about “hard-hitting action,” as well as new game modes, better customization options and “stunning graphics.” 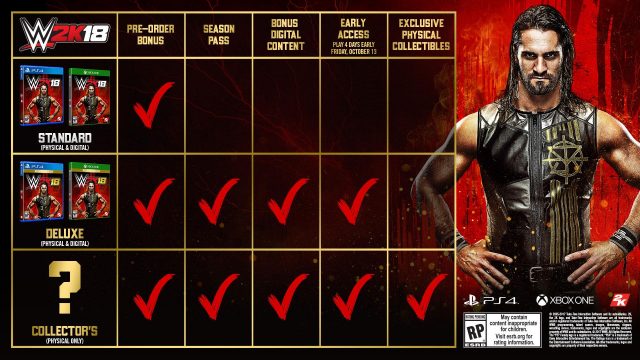