Silicon Valley is kicking Season Four up into high gear for the season’s penultimate episode this week, as Richard goes to drastic measures to kick off his new internet idea. Most of, “Hooli-Con” funneled the story down to Richard’s questionable means of realizing his new internet, which was executed in a clever, memorable and ultimately hilarious way, while a subplot with Erlich finally kicked off his proper exit from the show, while also allowing us to check in with Gavin Belson again.

What was most surprising about Erlich’s exit, even if it seems like he’ll still make one last appearance in the season finale next week, is how surprisingly unceremonious it is. This was obviously played for laughs, but the guys barely batting an eye at Erlich leaving, and Jian-Yang rushing him to the airport, paying his way and literally just tossing his luggage out before speeding off, all made for a surprisingly memorable way to get Erlich out of Silicon Valley, ironically by making it unremarkable. It turns out, Erlich is deciding to take an impromptu trip to Tibet as his exit excuse, and he does so using a postcard sent by none other than Gavin Belson! The idea of Erlich intruding on Gavin’s own personal quest for spiritual enlightenment is pretty funny, especially if he becomes the reason that Gavin ultimately abandons it to return to Silicon Valley.

The rest of the episode almost entirely unfolded at Hooli-Con, as Jack comes to realize that the VR technology he spent $2 billion on is problematic, while Richard urges Dinesh to get cyber subterfuge advice from Mia in prison. This intro with Mia was executed in very funny fashion, as Dinesh even now continues to dig himself deeper with Mia, hearing that Mia is now determined to exact revenge on the person who ratted her out. This of course leads to Dinesh seemingly tipping off security to get her sent to a max facility. Dinesh’s cowardice will hopefully come back to bite him in a big way in the now-confirmed Season Five, and I really hope that the show doesn’t waste too much time forcing Dinesh to answer for the repeated amount of times that he’s screwed over his girlfriend.

Once the episode gets to Hooli-Con, the story picks up even further, and most of it is pretty brilliant in terms of both laughs and surprises. Focusing the plot was really the right call here, even if we may not get to check in with forces like Bream-Hall until next season now. Regardless, Mia suggests to Dinesh that the best way to subtly implant a doctored Hooli app that’s actually in service of Richard’s new internet is to place wi-fi pineapples around the conference floor. Dinesh and Gilfoyle get to work on this, providing another welcome team-up between these two bitter enemies, while Richard reunites with Winnie, the woman he briefly dated last season.

One of the biggest elements that made this episode such an excellent success was in how it explored Richard’s deteriorating moral compass. Richard is now desperate to do whatever it takes to get his new internet idea off the ground, even if it means compromising his values that he previously stubbornly stuck by, even when that actively hurt Pied Piper. Having Jared work as the voice of reason while Richard starts abandoning principles and morality worked really well, especially when Jared justifiably compares Richard to Gavin/Hooli in this scenario. This also came to a pretty unexpected head when Richard immaturely sabotages the screen saver of Winnie’s new boyfriend, which prompts security to start investigating and discovering the pineapples. Yes, Richard’s spite and sudden bruised ego over Winnie feels like a bit of a stretch, and a forced way to get the ball rolling on Pied Piper’s security woes, though it’s difficult to dwell on that much, when the rest of the story execution was so often creative and unexpected.

Right when Richard and the guys are inevitably caught and facing big consequences though, Hooli’s security head surprisingly excuses them, and pretends that they are intentionally setting up the pineapples as a covert network test. This was a surprisingly logical and effective way to demonstrate how Richard’s past good and bad karma can influence his future in various unexpected ways, with Richard sticking up for Gavin in his interview ending up saving Pied Piper’s plan, just as Richard’s pettiness with Winnie almost doomed it all over again. Of course, it doesn’t help that Jack is abusing the security head too, since he knows that Keenan’s app is a disaster waiting to happen. That becomes especially apparent right as the episode ends too, as Jack tries to get everyone to activate a newly-installed VR trigger with glasses tech, which leads to everyone’s phones exploding into flames! Richard’s doctored app probably had something to do with that, and I really can’t wait to see how this plays out in next week’s season finale! 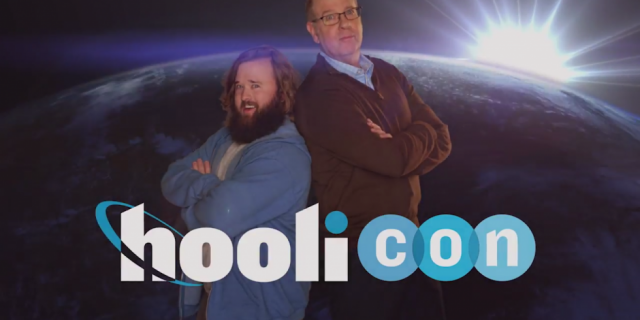 Silicon Valley is moving towards a very strong end for Season Four at this point, even as it must manage Erlich’s exit from the series at the same time. Erlich being paired with Gavin on a spirit quest in Tibet is a pretty effective way to write the character out of the show though, even if Gavin’s status next season is more up in the air. Most of all however, Richard’s compromised and eventually renewed morality made for a very strong foundation for humour, drama and excitement throughout this episode, which definitely stands as one of the strongest of the season at this point. Considering that Keenan’s tech proved to be even more destructive to Hooli than Jack could have imagined though, especially after Richard’s intervention, it still feels like the real excitement is yet to come in next week’s season finale, as Pied Piper may actually have destroyed their nemesis, Hooli… But will it be worth it?