NOTE: This review may contain some minor spoilers for Part 3 of, “The Ranch.” That said, the review is written to accommodate those who have not yet watched this chunk of episodes, and as such, will avoid discussion of major plot developments.

The Ranch is a simple-minded Netflix series that tries to tackle big ideas, and often does so with mixed success. Despite its considerable comedic star power, the series has often been better at its drama than its comedy, despite billing itself as a low-brow sitcom. Fortunately, at the very least, Part 2 of The Ranch managed to be a decent improvement over the too-frequently over-serious and dull Part 1, though the bad news however is that Part 3 of The Ranch has the show falling back into old habits. Once again, despite this show advertising itself as a sitcom, its drama feels far more impactful than its comedy in its latest batch of ten episodes.

The fundamental ideas behind Part 3 of The Ranch are sound at least, with this start to the first half of what’s supposed to be a 20-episode second season beginning immediately where Part 2 ended, as is usual for this show’s style. Heather has just told Colt that she’s pregnant, and the baby is his, and thus, we’re left to tackle some fairly interesting territory for a sitcom that so openly celebrates conservative politics; Pro-choice versus pro-life. Being a 23-year-old woman in a small town full of gossips and people who judge you, Heather isn’t exactly enthusiastic to be having a baby out of wedlock, and that leads to the obvious suggestion that she should get an abortion. 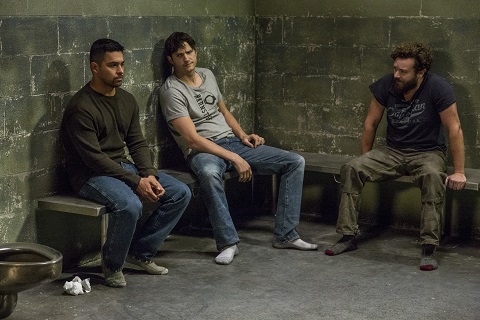 Surprisingly, The Ranch manages to take on this touchy subject without constantly feeling like it’s in over its head too. As much as the boilerplate humour seems to be designed for simple-minded audiences that don’t want to think, The Ranch will probably once again surprise those viewers who continue to stick with it by demonstrating surprising tact and intelligence on the difficult nature of unplanned pregnancy and abortion. Even when stalwart, hyper-right-wing characters like Beau, who is often treated as the true hero of the show despite his angry attitude, say what you imagine they will in this situation, the series doesn’t play to expectation. It finds a clever way to make compelling cases for all sides, and proceeds in a way that feels real and relatable. I really do have to commend the show for achieving that, against the odds.

The pro-choice themes do trickle down into the other characters’ arcs too, setting up interesting new conflicts that provide more surprisingly effective drama. Rooster finds it difficult to work with people who order him around at the My Little Pony Ranch that he now runs, Maggie reflects on her past decisions after seeing parallels with Colt’s situation, and Beau wonders if he can truly move on from Maggie after they get divorced. Even Colt has to decide whether he should pursue a relationship with Abby or Heather at this point, and Abby must likewise decide if it’s worth accepting that Colt got someone else pregnant, even if it means sacrificing Colt starting his first family with her. Not every one of these debates and introspective arcs achieves a satisfying result, especially when the Heather/Abby dilemma ends up handled a lot more carelessly than the debate over Heather’s pregnancy fallout with everyone else, but for the most part, The Ranch does find interesting new topics to tackle with its personalities in Part 3.

That said though, there’s just no getting around the fact that, as a sitcom, The Ranch is still too weak. This is the primary area where it falls back into old bad habits too, since Part 3 goes back to favouring being a bit more dramatic and depressing, which restores the feeling of The Ranch often feeling like a bait-and-switch. Maybe this will be a recurring problem with the first portions to the 20-episode seasons that Netflix seems to order in split parts for The Ranch, while the second half of each season is funnier, but that’s not necessarily a good approach. The fact that Netflix is currently looking to swing the axe on any show that isn’t delivering well above average results for audience viewership and acclaim should have The Ranch realizing that it really can’t afford to bill itself as a sitcom, then under-deliver on the actual laughs and optimism. All that’s going to lead to is The Ranch being next on Netflix’s chopping block.

Even if the drama is still king on this series as well, that also doesn’t excuse the fact that The Ranch is still radically forcing some conflicts, and that sadly remains true in Part 3. In fact, Part 3 has some of the most forced and contrived conflicts yet, with characters sometimes getting into arguments simply because the script demands it, and not actually because it makes sense. Again, Abby in particular suffers in this respect during Part 3, since the series has her acting like an uncharacteristic shrew in certain scenes, simply to mine more drama from the Colt/Heather pregnancy conflict, among other things. As I said, why is the drama The Ranch’s primary concern? It’s still starkly at odds with the marketing, which, yet again, bills this show as a sitcom more than anything else.

There really isn’t much else to say about Part 3 of The Ranch either, at least without going into spoiler territory. On that note though, this show remains a fast, undemanding binge in its latest ten episodes, one that you’ll mostly forget about once it’s done, beyond some of those dramatic highlights. With Netflix no longer being afraid to cancel shows that just aren’t performing well enough though, The Ranch needs to start stepping up as a sitcom if it wants to survive past Part 4 later this year. When it bills itself as a Netflix comedy series, it’s actively competing with laugh-out-loud Netflix comedy series heavyweights like Unbreakable Kimmy Schmidt, Master of None, Santa Clarita Diet, Trollhunters, BoJack Horseman, A Series of Unfortunate Events, Orange is the New Black, and the imminently-releasing GLOW, among others, and every single one of those shows frankly wipes their asses with The Ranch when it comes to the humour alone. Granted, The Ranch still stands above noticeably sub-par Netflix sitcoms like Fuller House and Flaked at least, but how much longer can this series truly carry itself on shooting for the middle?

The Ranch: Part Three Review
The Ranch achieves some legitimately clever pro-choice commentary in its usual conservative presentation during Part 3, but it's still not funny enough to truly stand out.
THE GOOD STUFF
THE NOT-SO-GOOD STUFF
2017-06-22
68%Overall Score
Reader Rating: (0 Votes)
0%