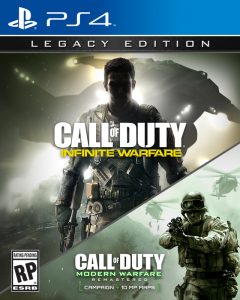 Call of Duty 4: Modern Warfare originally released for PC, Xbox 360 and PlayStation 3 in 2007, with a separate portable build also releasing for Nintendo DS, before the main console build of the game also expanded to a Wii release in 2009. It was hailed as an instant classic at the time of its original build, and one of the best games of 2007, single-handedly catapulting the Call of Duty franchise to triple-A gaming dominance.

Call of Duty: Modern Warfare Remastered by contrast was well-received by critics for the most part during its own debut for PC, PlayStation 4 and Xbox One last year, though drew extensive criticism from fans and pundits alike after it was announced that the game would be restricted as a bonus for the somewhat pricey Call of Duty: Infinite Warfare – Legacy Edition. The remaster drew even more criticism when multiplayer DLC maps were carved out and re-sold at an increased price compared to the original PC, Xbox 360 and PlayStation 3 builds of the game, and when microtransactions were also put into the remaster, after they were never present in the original game build from 2007. This backlash has led to Call of Duty: Modern Warfare Remastered being met with harsh user reviews on all three platforms, most notably leading to both it and Call of Duty: Infinite Warfare being branded with mostly negative Steam reviews. At the very least, this standalone release of Call of Duty: Modern Warfare Remastered should alleviate one of these concerns.

Keep targeting Eggplante for all major news and updates on Call of Duty.