Doctor Who is closing out Series Ten, Missy’s run and the Twelfth Doctor’s run all in one fell swoop across a two-part season finale event, one that begins this week. Fortunately, after a couple of more laid-back adventures over the past couple of weeks, Doctor Who returns to firing on all cylinders with the first half of its latest season’s conclusion, “World Enough and Time”, which begins as a seemingly routine adventure, before rapidly giving way to a shocking new direction.

On every front, this episode never disappointed, hitting the ground running from the get-go with Bill, Nardole and Missy coming out of the TARDIS for a fairly routine operation, as they walk onto a massive Earth colony ship broadcasting a distress signal. Missy is passing herself off as The Doctor, in the show’s latest flirtation with the idea of a female version of The Doctor at some point in the future, with The Doctor seemingly wanting to continue Missy’s rehabilitation by having her solve the problem on the colony ship. Missy is definitely clever enough, but are her instincts able to be shaped into a naturally heroic inclination? Probably not, but hey, The Doctor needs something to do on his latest Saturday.

Right around here though is when the curveballs start flying hard, as a mysterious blue man is revealed to be the only surviving passenger on the ship, which is infested by strange visitors that come up for humans, and only humans. The panicked blue man doesn’t even manage to be calmed by The Doctor either, as he eventually fires a shot, which blasts a hole in Bill’s chest! Amazingly, Bill isn’t killed off here, though she is taken to a mysterious new location, tended to by a strange nurse, and a scraggly-looking man that looks like something of a supervisor. Apparently, they gave Bill a mechanical heart that allows her to survive, but as a caveat, she can’t leave the hospital.

Compounding this mystery is the interesting device of time proceeding differently for Bill, in contrast to The Doctor, Nardole and Missy up above. You can probably see where this is going, when it’s made apparent that the colony ship is gradually sinking into a black hole. Turns out, Bill’s ‘hospital’ is on the other end of the ship, the one that’s seemingly becoming swallowed by the black hole, which leads to time moving extremely slowly on Bill’s side, due to the real-life astrophysical principle of time dilation. Bill watches her friends with the mystery man over the course of weeks, months and eventually years, with the mystery of strange bag-faced individuals begging you to kill them still hanging in the air all around her… Or, it would be a mystery, if you’re not a hardcore fan of classic Who that might recognize what these mysterious humanoids are. 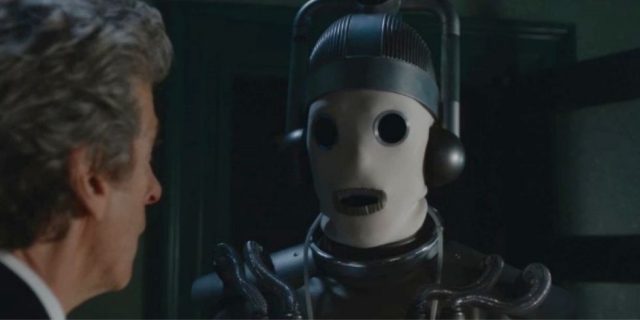 The buildup to the true secret behind the mysterious ship is brilliant, and wonderfully ties New Who back to the origins of a key episode from the earliest days of Classic Who, namely the very first introduction of the Cybermen all the way back in the 1960’s! This comes with resurrecting their original retro design from the First Doctor era, and leads into a series of amazing reveals after Bill is captured, betrayed by the man who had been keeping her company when she tries to escape and reunite with The Doctor. It might seem like there’s some big twist where The Doctor ultimately saves Bill here, but surprisingly, there is nothing of the sort. Instead, Missy discovers too late that the colony ship isn’t an Earth ship, but a Mondas ship, with Mondas being the lost sister planet of Earth, first mentioned during the Cybermen origin story of the First Doctor era, way back in 1966. This episode’s storyline is the prequel to that very old Classic Who tale, and it turns out that this is the real first encounter with The Doctor for the Cybermen!

This episode also presented a wonderful sense of many things coming full circle, as The Doctor and Missy are almost finished their runs, showrunner, Steven Moffat is exiting the show after this season is done, and now even Bill is seemingly permanently removed from her humanity. This of course was also nicely blended with the story directly tying into classic First Doctor serial, “The Tenth Planet” from 1966, and the twists kept on coming from there with Missy as well! It turns out that Bill’s scraggly friend was none other than a disguised Master, with John Simm reprising the role he first debuted during the Tenth Doctor’s run! The Master tempts Missy into returning to the dark side, as the two stand beside the now-Mondasian Cyberman-converted Bill, who sheds a single tear under her mask as the episode ends. This appears to explain why the modern Cybermen have a strange teardrop-like shape under their left eye, giving these age-old foes of The Doctor some much heavier emotional consequences for the future!

The Doctor’s apparent failure to save both Bill and Missy presented a story conclusion that was unusually dark and full of despair for most Doctor Who storylines, especially this season, which has often built itself on surprisingly quick, easy solutions once we reach an episode’s climax. That said though, “World Enough and Time” feels like another series-defining episode of Doctor Who, and is excellent in pretty much all respects. The shock conclusion of the episode leads fantastically into next week’s proper season finale, where the Twelfth Doctor will apparently regenerate into the still-unknown Thirteenth Doctor, barring some huge surprise fake-out. Considering the show openly flirting with changing genders across Time Lord regenerations in this episode, and the BBC strangely keeping the Thirteenth Doctor actor’s identity a secret even now, there’s going to be some obvious speculation that, contrary to rumours of the BBC, “Not wanting to risk it”, we may actually be getting a female Doctor for the first time next season. Even if the Thirteenth Doctor does remain a man though, the episode also says that the gender of a Time Lord really doesn’t matter, when the heart underneath remains the same. Either way, it looks like we’re going to be in for a hell of an end to Series Ten of Doctor Who next week!