NOTE: Some minor spoilers for the first season of, “GLOW” are present in this review. That said, the review is written to accommodate those who have not yet watched the series, and as such, will avoid discussion of major plot developments.

Back in the 1980’s, the entertainment landscape was a very different place for female performers. In an era that was already rather male-dominated throughout then-current pop culture, the lack of meaningful roles for women was even more apparent in the wrestling circuit, which was entering a new golden age with sensational male-driven wrestling leagues like the WWF. Even today, the WWF, now operating under the moniker of ‘WWE’, continues to be quite successful, offering no shortage of iconic performers and merchandise, as well as a highly successful annual video game adaptation series from 2K Sports. The difference now however, is that female wrestlers are much more common and accepted, and are just as much a part of the modern WWE as the male wrestlers now. Heck, the WWE’s female wrestlers even have their own successful reality show now, Total Divas!

Again though, in the 1980’s, such an idea would be outlandish and unheard of. That’s what inspired the creation of cult female-driven wrestling series, GLOW, which aired between 1986 and 1989. GLOW, which was an acronym standing for ‘Gorgeous Ladies of Wrestling’, gave female performers a fighting chance, pun not intended, in the mainstream media of the 80’s, by hiring struggling actresses to portray amateur wrestlers acting out various storylines. The short-lived series has been largely forgotten by modern audiences, but it seems poised to re-enter the public consciousness now, considering the increasing power and influence of women in the modern media, which led to the creation of a new Netflix dramedy series, also aptly titled ‘GLOW’. Rather than just be a straight revival however, GLOW is instead a fictionalized story set during the creation of the original GLOW series in the 80’s, complete with all of the characters’ names being changed, and much of the actual history being adapted pretty damn loosely. 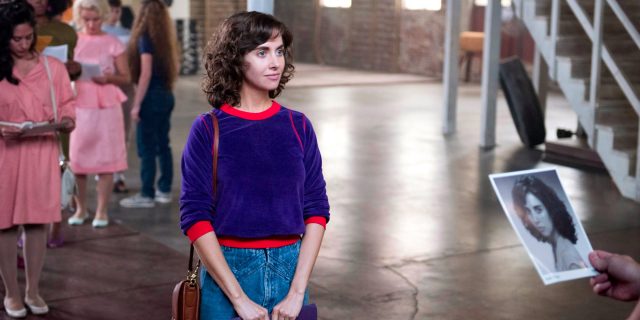 Of course, if you’ve seen Orange is the New Black, which comes from the same production team, and also adapted a non-fiction story as a heavily fictionalized dramedy series for Netflix too, you should have an idea of what to expect from GLOW. This is another proud female-driven ensemble story starring a bunch of scrappy underdogs trapped within a system that seemingly wants them to fail. The difference of course is, rather than being in prison, the women are trying to break out in a sports/entertainment medium that wants nothing to do with them. This may be a fictionalized story with entirely different personalities from the real-world GLOW series of the 80’s, but the message of strength and conviction still shines through, even if one of this show’s only noticeable flaws in its first season is that it will probably disappoint the subset of viewers who want a more factual account of the real GLOW’s production history.

I must emphasize that this is one of the only drawbacks (and it’s barely worth mentioning, really), to this first season of GLOW as well, which, much like the best seasons of Orange is the New Black, is an absolutely brilliant new series, and another smash hit debut for a new Netflix show in 2017! The series is immediately endearing, sporting very flawed, but lovable characters, all of which are memorable and grounded as strong, unrefined, yet inspiring female protagonists. The same is also true of outwardly disagreeable director, Sam Sylvia, played by Marc Maron, who is saddled with the GLOW series as a thankless means of trying to fund his increasingly less successful schlock movies, which are inexplicably complicated despite being superficially trashy.

Alongside Maron’s grouchy, drug-addicted Sam, the show’s amateur wrestler ensemble is headlined by Alison Brie’s Ruth Wilder, and Betty Gilpin’s Debbie Eagan. Beginning as best friends, Ruth and Debbie are both actresses, with Ruth struggling to find a worthwhile role amid a life of poverty and dependence, while Debbie gives up life on a demeaning soap opera to raise a baby with her unfaithful husband. Circumstance leads both of these women to the offbeat audition of ‘GLOW’, which is looking for unconventional women to set the world of wrestling on fire, despite the women having no actual wrestling experience. Other noteworthy characters filling out the GLOW ensemble include: No-nonsense trainer, Cherry Bang (yes, that is her real name), well-built but sweet wrestler family daughter, Carmen Wade, spoiled bad girl, Melrose, eccentric wolf identifier, Sheila, underage outcast, Justine Biagi, and sultry British geek, Rhonda, among others, all of whom create fun, emotionally-charged and compelling personalities with varying backstories, strengths and weaknesses. Viewers are bound to identify with at least one of the ladies in the GLOW ensemble pretty quickly.

While it’s fairly evident that GLOW’s target audience is women in the case of this fictionalized Netflix offering, just as Orange is the New Black’s has often been since its inception, GLOW is nonetheless so clever, charming and well-written that men can also easily enjoy it. While women will naturally come for the extra identifiable personalities, men can at least enjoy a tasteful degree of sex appeal, even though it is buried under a lot of proudly period-accurate 80’s fashion sense. The attention to detail when it comes to replicating the 1980’s era is really astounding in GLOW, even if that means that most of its female leads are not going to be conventionally attractive by modern standards, should certain viewers be coming for that. That’s really not the point of the series though. Much like the real-world GLOW, you may come for the sex appeal if you’re into that kind of thing, but you’ll stay for the heart and soul of the women driving the story.

While the tone and some of the themes feel similar, it’s also worth noting that GLOW firmly manages to separate itself from Orange is the New Black, and never comes off as a cynical attempt by Netflix to reverse-engineer and duplicate their current biggest hit show. This is immediately evident in that it shortens itself to approximately half-hour episodes, in contrast to the approximately hour-long episodes of Orange is the New Black, and also spans a more modest ten-episode length in Season One, even if that order is likely to increase in seemingly inevitable future seasons. The tighter pacing of GLOW’s first season does lead to some characters having higher bearing over others in the various story arcs, but as with Orange is the New Black, that simply invites future seasons to shift the spotlight around, creating new and interesting plotlines for the GLOW ensemble, which is bound to get even bigger, if and likely when Netflix decides to renew GLOW for additional seasons.

More GLOW for Netflix is both welcome and expected to boot, seeing as it’s pretty obvious that the streaming platform has another hit on its hands with this new Original Series offering. 2017 has been a pretty awesome year for debuting Netflix shows so far, between One Day at a Time, Santa Clarita Diet, 13 Reasons Why, and now GLOW most notably, and the year is barely past its halfway point too! After 2016 became a testament to quantity-over-quality with the sheer volume of shaky, uneven Netflix shows that debuted last year, it seems like the streaming giant is officially righting the ship, and once again focusing on quality first and foremost with its original programming. That’s good, because it will lead to more shows like GLOW, a smart, empowering, fun and memorable comedy series with just the right amount of drama flavouring to round it off. Even if this show may have possibly begun as an attempt to duplicate the massive success of Orange is the New Black, it’s frankly difficult to complain when GLOW is this damn good. It clearly understands one of the most important rules of show business, since it never struggles to leave you wanting more!