Have you ever encountered a person that felt so suave and so sophisticated that it felt like the very world around them couldn’t help but dance to their tune? That’s pretty much Baby Driver in a nutshell. This latest writing and directing vehicle for Edgar Wright of Scott Pilgrim vs. The World and Cornetto Trilogy fame is an action movie built around a killer soundtrack, an upbeat tone and a whole lot of romanticized style. It’s also a very welcome breath of fresh air in 2017’s mostly disappointing Summer movie season (great superhero movies notwithstanding), finally giving us a slick, original and highly memorable Summer movie release that wholly deserves your time and money! 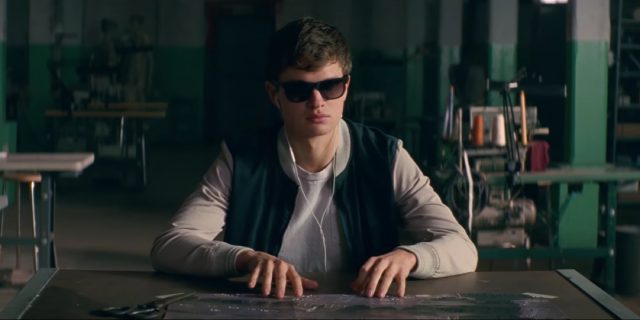 To some though, that won’t be a surprise, seeing as Edgar Wright has spun virtually nothing but brilliant movies since he first came onto the scene as a mainstream movie director with 2004’s Shaun of the Dead. The only true measure of an Edgar Wright movie worth its salt then is comparing it to other Edgar Wright movies, which may be the one time that Baby Driver finds some small flaws to some, since it falls just barely beneath the standards of Shaun of the Dead and Hot Fuzz especially. When taken on its own merits however, Baby Driver stands as this Summer’s first truly superb movie that doesn’t star a superhero or superhero team, so if you’re looking for something cool and different that will definitely stick with you, this is the movie you’ll want to see as soon as you can!

Baby Driver stars Ansel Elgort as the titular Baby, an incredibly skilled getaway driver for a group of criminals led by Kevin Spacey’s Doc, who always insists on using Baby as his driver. Things go pretty well for the two characters as well, with Baby making plenty of money that he can use to take care of his deaf-mute foster father, Joseph, played by CJ Jones, while Doc gets to rely on getaway vehicles that he knows will deliver. Rounding out the criminal ensemble are Jon Bernthal’s condescending Griff, Jon Hamm’s party-loving Buddy, Eiza Gonzalez’s sultry girlfriend to Buddy, Darling, and Jamie Foxx’s slippery, yet cool Bats, all of which are memorable characters in their own right, and all of which are complemented by some truly standout performances.

As you can imagine though, it’s Elgort that carries a huge part of Baby Driver, as a character that balances a sense of aloofness with hyper-professional precision, which is all thrown for a loop when he meets and falls in love with a kindly young waitress named Debora, played by Lily James. James’ Debora is certainly lovable as well, even if the budding relationship between her and Baby is inevitably romanticized quite a bit, and that won’t sit right with some viewers that are hoping for more serious emotional stakes. The movie does do its best to make Debora feel like a fully three-dimensional character, as does James, since she at least has a sense of hopes, dreams and ambitions that help define her, but it is sadly true that Debora is outpaced by the movie’s other characters, and gets left in the dust as unfortunately the blandest character in Baby Driver, which is kind of a shame.

Still, it cannot be exaggerated enough that every performance in this movie is quite exceptional, and Baby Driver in general is thus filed with style and personality. As expected in an Edgar Wright movie, there’s a huge amount of energy and, ahem, drive that founds the entirety of Baby Driver’s personalities, which skim the lines of reality, even as they noticeably exist in a realm of cheeky fantasy. Baby Driver is nonetheless the most grounded movie that Wright has made to date, since it doesn’t have any zombies, aliens, small-town cults or super-powered ex-lovers, but even then, Wright clearly thrives in a world of exaggeration, and the personalities of Baby Driver continue to uphold this sensibility very nicely.

Baby Driver is not a very complex movie, and that naturally lends itself to the air of romantic fantasy that founds both the plot and the soundtrack. This is very much a story that’s told in a light-hearted allegorical faction, as the theme of falling in love is all throughout Baby Driver. Told through the perspective of an otherwise directionless, disengaged young criminal, this movie comes complete with Baby being primarily characterized by a permanent case of tinnitus that he suffers from a childhood car accident, giving him a ceaseless ringing in his ears, which he drowns out by constantly putting in earbuds and blaring music. This creates an interesting theme of a man who doesn’t learn how to listen or engage with the world after losing his family, until he finds renewed direction and hope by meeting a woman that he immediately falls for. 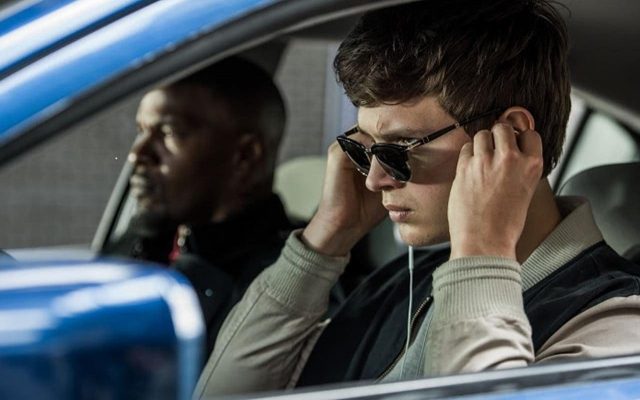 From there, the conviction, passion, agony, destruction, mischief and general angst of young, uninhibited love infects Baby Driver’s smooth, but reliable criminal slickness like a jovial virus. The idea of destroying Baby’s criminal world in hopes of building a new and better world is illustrated brilliantly, even as Baby’s established life keeps trying to maintain what is reliable and more inherently logical, yet not what is possibly best for him. Baby Driver celebrates both the best and the worst elements of human connection, and the fact that it does so amid such a cool, fast-paced and engaging action-thriller is all the better! Like I said, not everyone will agree with the hyper-idealized romantic tone of the story, which does abandon realism and practicality whenever it deems it necessary, especially with Debora’s character, but if you’re alright with an action movie that appropriately doesn’t ground itself too far in reality, Baby Driver is both uplifting and a hell of a lot of fun to experience!

Edgar Wright has proven on multiple occasions that he is an extraordinarily talented director, and Baby Driver represents some of his finest directing work to date! This is a brilliantly directed movie in every respect, between how well Wright leverages the soundtrack and Baby’s character to complement the tone and themes, to how tightly and excitingly he realizes the action scenes, most of which appear to have been done with a minimum of CGI assistance. Amazingly, Wright creates a movie that never stops feeling like it’s appropriately on rhythm, never losing track of the high-energy presentation that he’s constantly cultivating, which results in a lot of infectious style, and a fantastic sense of overall charm. 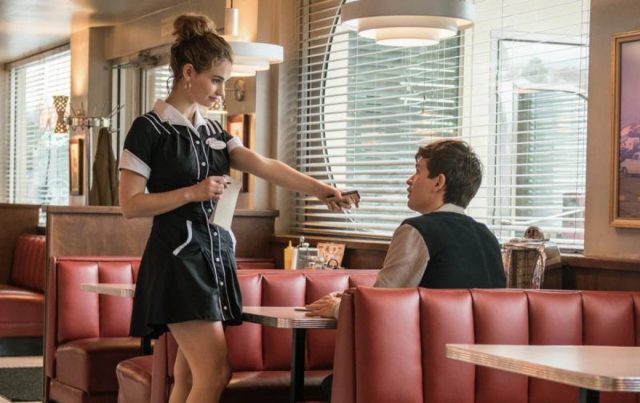 As great as the movie’s romanticized style is though, it really bears repeating that Wright is an expert at gleaning personality out of action scenes that many other directors wouldn’t have treated with such passion and liveliness. Baby Driver’s white-knuckle opening is especially fantastic, with its many chase scenes in general all being nothing short of outstanding from a directing standpoint. This is an action-thriller that feels wholly unique and original, and one that shines through so much exceptional personality between both the cast and the action. The fact that Wright originally conceived Baby Driver as a concept in 1994, and still made it awesome in 2017, is perhaps the best testament to how much creative inspiration is throughout the movie, and how well it will no doubt stand as another highlight movie in Wright’s prestigious writing and directing catalogue.

Not many action movies feel like they place much bearing on their soundtracks, but in the case of Baby Driver, it definitely needs to be brought up. Baby Driver has one of the most amazing soundtracks featured in any 2017 movie release to date, with the music suite being timed with the action, along with crucial character scenes, to both thematically and stylistically enhance the movie. This movie is packed with excellent licensed songs, and yes, many of them have the word, “Baby” all over them, but none of them feel out of place. 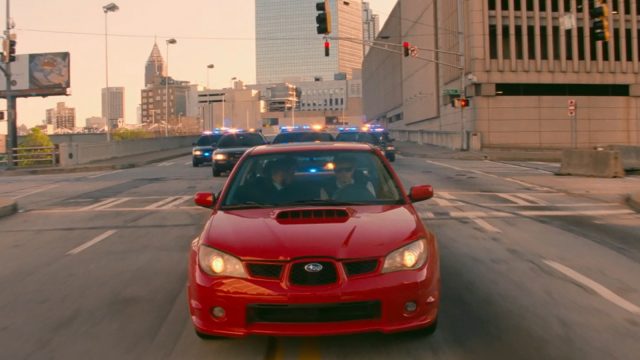 Beyond the fact that characters don’t sing, Baby Driver almost feels like it could be a jukebox musical, only with the vocals replaced with car engines. It’s a really novel way to present an action movie, and one that gives each scene its own sense of effective character. The pacing of the movie is often very breathless, but the style is also very classy thanks to the well-implemented soundtrack and musical sensibilities, all leading to Baby Driver having a standout unique identity that sets it apart from anything else. Original movies are a disappointing rarity in the modern cinematic climate, but Baby Driver deftly proves the many merits of them, when they’re done right!

Baby Driver is another excellent testament to the creativity and directing talents of Edgar Wright, as well as another welcome champion of original movie concepts. Everything about Baby Driver brilliantly comes together, from its great performances to its outstanding direction and action, to its sublime soundtrack that complements every inch of a movie that’s already pretty great from a writing, directing and acting standpoint. This is the kind of clever, memorable and fun original action movie that Hollywood hasn’t produced in a long time, and it’s great that Wright was finally able to make it a whole twenty-three years after its original conception.

There’s still a certain subset of moviegoers that might not take to Baby Driver, if they’re bothered by its fantastical outlook on romance or its increasingly outlandish story, but for the most part, those craving something unique and memorable will definitely be satisfied. Edgar Wright has never failed to deliver when it comes to creative movies that effortlessly stick with you, and Baby Driver definitely does that reputation proud! Like a great song, this is a movie with a pleasant, if romanticized message that lingers in your soul, and still enters your mind as an outlet of simple, yet potent emotional gratification, long after you’ve originally experienced it. I guess all that needs to be said is, play it again, Mr. Wright!