NOTE: Spoilers from throughout the third season of, “iZombie” are present in this review

The CW unfortunately bumped iZombie back to being a midseason show for its third season, and even then, it certainly took its time returning to the airwaves. It wasn’t until the start of this past April, almost exactly a year after Season Two concluded, that we could finally check back with Liv, Ravi, Babineaux, Major and all of our other favourite personalities on this surprisingly great Vertigo/DC graphic novel-inspired series. The good news after the grueling wait at least is that iZombie is still very entertaining in its third season. The bad news however is that the show does seem to have lost a small step in Season Three, likely due to the reduction in episode count from Season Two’s nineteen to Season Three’s thirteen.

Initially, the season starts off with plenty of compelling hooks. As you can imagine, especially after the Max Rager incident that closed out Season Two in 2016, it’s only a matter of time before Seattle learns of the existence of zombies. Because of this, military contracting firm, Fillmore-Graves, headed by the altruistic, if imposing Vivian Stoll, steps into town to begin preparing for ‘Discovery Day’, the day when humans learn that the undead walk among them. Disappointingly though, Vivian doesn’t make too much of an impression, since she’s eventually killed alongside her lieutenant in a coup, which sees her brother-in-law, the more aggressive and ruthless Chase Graves, installed as Fillmore-Graves’ new boss, likely fanning the violence that is feared to erupt when humans learn about zombies.

The coup in question also brings Babineaux into a more personal conflict, as a woman and child that he was close with during his time as an undercover cop in Vice end up being killed by a mysterious attacker in the season premiere, believed to be conspiracy theorist, Harley Johns and his fellow internet wingnuts. Seeing as Babineaux learned about zombies at the end of Season Two, this was a smart chance to dive into his character’s psychology and play with the idea that cases and murders are now much more personal to him. Dale Bozzio even comes back towards the end of the season, and ends up turned into a zombie after some sabotage with a flu vaccine related to Fillmore-Graves, setting up another personal connection to zombies for Babineaux in next year’s Season Four. Sadly though, the ultimate mastermind behind the so-called ‘Tuttle-Reid murders’, Fillmore-Graves executive, Carey Gold, made for an underwhelming twist, as did Babineaux all but shrugging at this knowledge when it finally reaches him in the season finale.

Also upgraded as a character in Season Three is Peyton, with Aly Michalka finally made into a full series regular in Season Three, complete with an additional Peyton section in the show’s title sequence as of this season, after Michalka was bumped down to a recurring cast member in the first two seasons of iZombie. With Peyton having a more active bearing on the plot, we got an interesting new legal perspective to the coming revelation of zombies in Seattle, as Peyton both tries and fails to develop a relationship with Blaine, before getting involved with zombie mayor hopeful, D.A. Baracus, who may be tied to a murder conspiracy involving a particularly memorable case-of-the-week victim for Liv and Babineaux. The final resolutions of many of Peyton’s ongoing storylines seem to be being saved for Season Four, but her increased presence on the series is very welcome, especially when it proved to be a key device that ensured Blaine was outed for faking very temporary amnesia, causing him to eventually revert back to his old criminal ways. 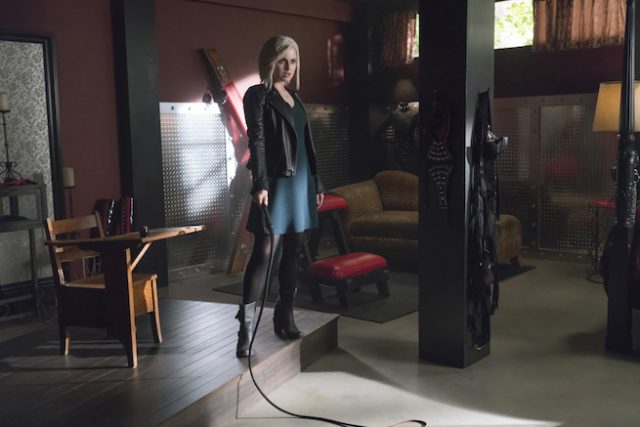 Disappointingly though, the criminal and procedural element of iZombie was one of the biggest things that ended up suffering in Season Three. Liv’s cases-of-the-week often delivered entertaining and amusing brain personalities at the very least, but many of the cases this season disappointingly felt like afterthoughts, especially with their overly easy and unsatisfying resolutions. There were a couple of shining exceptions, with, “Dirt Nap Time” and, “Some Like it Hot Mess” most notably being highlight episodes this season, but it just felt like the show didn’t care as much about the cases this season. Again, this is likely due to having to maintain the growing scope of the series, while having to struggle with a reduced 13-episode order in Season Three, leaving less time to address the many crucial ongoing storylines that iZombie continues to juggle in the wake of last season.

Fortunately, two characters that did end up pretty much consistently delivering were Blaine and Major, who ironically capitalized on the zombie hysteria by being outside of it, and having to face separate struggles as outcasts and pariahs. Even if it’s getting a tad unrealistic at this point, Major still struggling with the false accusation of being the Chaos Killer was very heartfelt, and led to him falling in with the zombie soldiers at Fillmore-Graves, even when a cure from Ravi makes him human again. Major eventually losing Natalie to a distraught Harley, who blows himself up to take out a huge contingent of Fillmore-Graves zombies at a house party, made for an effectively tragic way for Major to permanently reject humanity as well, as he successfully convinces Chase to scratch him and re-zombify him. Likewise, Blaine being rejected by Peyton for his surprisingly innocent deception, the only woman he’s ever loved and wanted to be better for, pushed him back to his old ways, complete with usurping command of a zombie club built by his father and Don E. Blaine and Major both end the season on rather down notes, both being left with nothing, but that’s where iZombie perfectly capitalized on its drama, ironically by moving away from the question of Seattle facing Discovery Day.

By the end of the season, Discovery Day does indeed come too, as Liv coerces a zombified Johnny Frost to announce on the air, with a follow-up from Chase, that zombies are real, and a flu virus distributed under false pretenses has zombified much of the city’s population. Season Three ending on an uncertain note of violence and escalation, as Liv is forced to scratch Ravi so that he can be his own guinea pig with his latest cure effort, while Major helps Fillmore-Graves soldiers gun down human attackers, was very effective, and helped to make up for the fact that some story elements felt too truncated this season, on top of much of this season’s cases-of-the-week feeling noticeably underwhelming. Like I said, iZombie does somewhat lose a step in Season Three, though not to the point where the show stops being clever and entertaining overall. The reduced episode count clearly compromises certain storylines, but at least Seattle now learning about zombies, and being predictably uneasy about them, sets up for lots of promising developments next season. We’ll have to wait until well into 2018 to catch up with iZombie again, but even during a lesser season this year, it’s great to see that this series remains one of The CW’s most underrated and thoroughly enjoyable shows!

iZombie: Season Three Review
iZombie's third season somewhat loses a step, likely due to a reduced episode order, but still presents an interesting and entertaining account of how Seattle's citizens come to learn of the existence of zombies among them.
THE GOOD STUFF
THE NOT-SO-GOOD STUFF
2017-07-04
81%Overall Score
Reader Rating: (0 Votes)
0%