Rhythm gaming’s heyday may be over, thanks to greed, over-saturation and the decline that generally follows. However, that’s not to say that the genre is dead, which isn’t the case at all. No, indie developers whose creativity sometimes outmatches their budgets have stepped in and taken the reigns, which has resulted in some standout titles. Drool’s Thumper — which has just made its way to Xbox One after stops on PlayStation 4/PSVR, Steam and Nintendo Switch — is one such release, which helps show that not only is rhythm gaming still alive and relatively well, but so is arcade-inspired, score-based gameplay.

Referred to as a rhythm violence game, Thumper feels like the musical version of a difficult 80s arcade game. That is, the type of experience that consumes the player’s attention, and requires all of it, as he or she fights for a top spot on the always changing leaderboards. Like the games of yesteryear, though, Thumper is not easy, nor is it anywhere close. In fact, it’s one of the more challenging games in its genre, and one that this reviewer has honestly yet to fully complete because of its awfully demanding twitch mechanics.

Herein, players control a metallic space beetle whose rough exoskeleton sheds following collisions, leaving it susceptible to death upon its second hit. So, as is to be expected, the goal here is to not get hit, all the while trying to score as many points as possible by taking clean lines and hitting all of the notes that you come across. How is this done? Well, much like Guitar Hero or Frequency before it, all of the action is contained to a track, and everything you need to interact with, jump over, hit or avoid comes at you quickly. This is nowhere near a Harmonix clone, however, because this time around there is only one track and the notes are more infrequent than the hazards, which include blockades and curved walls that must be skimmed across. 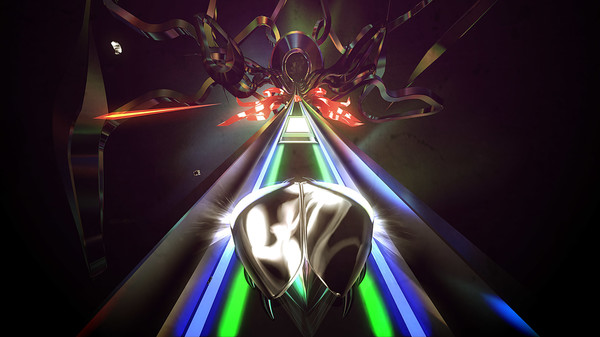 The game’s nine stages are chopped up into parts, with track-based checkpoints delineating each change of section. This means that instead of choosing a song and playing its track like you would in Guitar Hero or even AAERO, you’re continuously grinding across one long track throughout stages that are split into approximately twenty different parts. The music, then, is more ambience than anything intrusive, and usually results from your actions as you attempt to survive the intense speeds, flashing neon lights and devilish courses that Drool has created.

Needless to say, Thumper isn’t for those who are prone to seizures, nor is it for folks who’ve found that their reflexes have lessened greatly as they’ve aged. This is a game that adults will appreciate, but is one that will perhaps serve younger players best, given their faster reflexes. That’s not to say that the average gamer shouldn’t give it a chance – just be warned that it’s a demanding experience that doesn’t hold a single punch and may kick your ass right from the get-go.

The speed is real, and it’s no joke.

The key to success here is to get in a good rhythm and pay very close attention to what’s coming ahead. If there’s a turn with a wall ahead, note which direction it’s facing, then press the action button and tilt the joystick the corresponding way (left or right). Conversely, if it’s a minor blockade ahead, hold the action button, press up and crash through it. These are just the basic hazards, however, as later levels will require you to do even more, all while dealing with less reaction time. This includes things like jumping over one object, then crashing through the next, before skirting around a corner and doing something similar on the other side of the turn. 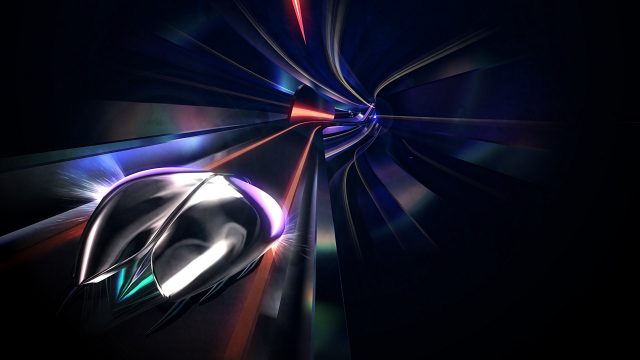 What’s commendable about Thumper is that it’s its own game. Drool has crafted an addicting and rewarding experience here, which offers lots of pride to those who can best its devilish, neon-hued roller-coasters. Despite being somewhat basic in presentation, it’s also easy on the eyes, offering a stunning and sleek mixture of neon and metal, along with some rather odd-looking bosses who can only be beat by hitting multiple notes in a row all the while dealing with increasingly difficult hazards. The sound is also pretty impressive, although it’s not exactly what you’d expect from a music or rhythm game, since it’s ambience heavy and is mostly made up of the noises that come from the player’s actions. As such, one should not go in expecting this to be the next Guitar Hero, or for there to be licensed music that you’ll be familiar with, as this simply isn’t that type of game.

At the end of the day, Thumper is a pretty impressive beast, albeit one that won’t be for everyone. Drool’s challenging debut is easy to respect, and can be fun to play, but its difficulty level is high and it lacks any sort of forgiveness. As such, while some will absolutely adore this game for what it is, others like myself will be left a bit dismayed by the gargantuan challenge it presents and how it’s often more difficult than it is fun.

**This review is based on the Xbox One version of the game, which we received.**

Thumper Review (Xbox One Version)
Thumper is often more challenging than fun, but there's no denying how rewarding completing a stage can be. There's a lot to like here, but it's a shame that the game isn't more accessible than it is.
Audio79%
Visuals80%
Gameplay73%
Storyline0%
The Good Stuff
The Not-So-Good Stuff
2017-08-29
73%Overall Score
Reader Rating: (0 Votes)
0%