Try as it may, Preacher really can’t crack its ongoing Eugene storyline, can it? “Backdoors” was unfortunately another Eugene-heavy episode this week, and that meant that the show’s momentum was once again disturbed, despite some considerably entertaining moments with the rest of the lead ensemble. With only two episodes left in Season Two now though, one has to wonder how the Eugene arc is going to be wrapped up on any kind of truly satisfying note at this point, since it’s still dragging the rest of the season down quite a bit.

Regardless, Hell’s forces continue to probe the damned prisoners, getting closer to discovering who, “Doesn’t belong.” One would think that this answer is fairly obvious, but even so, Eugene manages to formulate a plan with some help from Hitler, after filling in more of Hitler’s supposed, “Worst memory.” Hitler explains that the incomplete scenario represents the final day of his being a good person, which does manage to carry some dramatic weight, though it’s hurried away in favour of starting Eugene’s proper escape from Hell. Hitler leads Eugene down ‘the hole’ towards the end of the episode, after humourously coercing the prisoners into singing a hymn together, and that’s where they leave them. Hopefully, whatever is down there makes up for the otherwise sluggish Hell storyline up to this point, because it feels like Eugene’s character has been largely wasted all season, especially when his friendship with Hitler isn’t really offering any meaningful character development, even now. 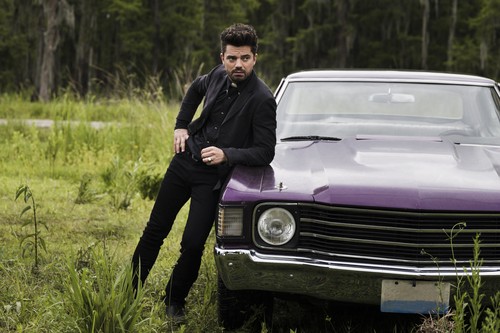 Outside of the underworld, Tulip confronts Jesse about his deception with the Saint of Killers, which leads to some tension between the lead ensemble. Cassidy is at least a bit distracted with Denis continuing to act out of control in his new vampire state, though Cassidy getting Denis a small dog to keep as a pet does seem to have calmed him down a bit. I imagine that this dog is probably not going to survive until the end of the season, knowing Denis’ issues with containing his bloodlust, but for now, the Cassidy/Denis relationship is at least reaching a friendlier place, even if the difficult question of Cassidy possibly having to off his own son soon still hangs in the air a bit.

Tulip also takes a trip with ‘Jenny’ (Featherstone), to try and melt down the Saint of Killers’ weapons, ridding the world of his menace forever, at least in theory. This desire to destroy the weapons is motivated by the Grail pulling up the truck that Jesse left the Saint in, only to discover that it’s empty. This seems to be an intentional move by Herr Starr though, seemingly in an effort to create conflict between Jesse and Tulip, so that Jesse will abandon his friends and take up the Grail’s cause. It’s an interesting idea, even if it feels like it’s coming too late in the season now. Still, the Tulip/Featherstone interactions continue to be great, and Featherstone blackmailing the smelter with an oral sex-related proposal was definitely one of this episode’s highlight moments!

Naturally though, the Saint’s weapons can’t be destroyed, even in molten metal of over four-thousand degrees in temperature. The Saint’s weapons don’t even get hot, in fact! This leads to Tulip trying a contingency plan, where she humourously wraps up the weapons and tries to mail them somewhere else. Yes, it stands to reason that the Saint will be armed and dangerous before long anyhow, especially when it seems like the Grail is intentionally hiding him away, with Hoover seemingly setting the Saint free again in the episode’s final few seconds. Tulip will probably wish that she’d just left the weapons under the bathroom floor in that case. Still, hopefully the return of the Saint of Killers benefits the season’s final two episodes, since it felt like the initial chase between Jesse and the Saint had firmly run its course by the time the two made their bargain several episodes ago.

Once again, it’s the Grail that continues to steal the show in this episode, as they’re the primary force that’s perfectly balancing humour and menace at this point. The interactions between Herr Starr, Featherstone and Hoover are always entertaining, being both over-the-top and dramatic. Jesse even had some more great moments with Herr Starr this week to boot. Herr Starr forcing Jesse to listen to his childhood prayers was kind of interesting, even if this mostly served as a lead-in to a flashback that reveals Jesse as having some sort of strangely abusive unidentified grandmother, with no other real context for now. This feels like groundwork for a potential third season of Preacher, but either way, the interaction ends with Jesse forcing Herr Starr to shove all of Jesse’s prayer recordings up his ass. Because Preacher. As powerful and intimidating as the Grail can be, it’s really awesome to see how well the show plays with their vulnerability to the Word of God nonetheless, without taking away what makes characters like Herr Starr so imposing in the process. 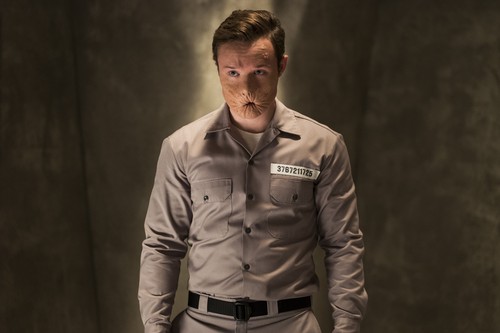 In the end though, it felt like Preacher still hit a bit too much of a speed bump this week, even if there’s enough good ongoing story arcs to avoid fatally sinking the season as it approaches its finish line. “Backdoors” was regularly hurt by its heavy emphasis on the still-ineffectual Eugene storyline, even if the reliably great story material with the Grail continues to shine. Jesse seeming to think that God was the strange dog person from his initial hours in New Orleans is also a fairly interesting turn, and will be even more interesting if Jesse turns out to be correct. If nothing else, the season’s stakes are staying nicely high in the lead-in to the climax, even on Eugene’s end, though that storyline really needs to find a better place to go in the season’s remaining two episodes. I’m sure that Eugene will be a much more rounded and interesting character once he’s actually out of Hell, but for now, Preacher still just can’t seem to mine any interesting material from what was supposed to be one of the season’s most dramatic and memorable story hooks.

Preacher 2.11: "Backdoors" Review
Preacher is still losing too much momentum to the Eugene story arc this week, even if the other characters nonetheless entertain well enough.
THE GOOD STUFF
THE NOT-SO-GOOD STUFF
2017-08-29
77%Overall Score
Reader Rating: (0 Votes)
0%