With Scarecrow now unleashed on Gotham City, things quickly started to escalate in this week’s episode of Gotham, which already feels like it’s ballooning the scale of the current storyline to sizable new degrees. “The Fear Reaper” was certainly a very entertaining episode, as we get to see our first proper Scarecrow attack, while some really shocking new developments happen with Bruce’s new vigilante career, though the overly crowded storyline does sometimes become a problem yet again, as certain vital story elements appear to be expedited for the sake of the show moving on to its next big evolution as quickly as possible.

Much like last week’s season premiere, the ongoing conflict between Penguin and the GCPD remains very strong, especially with the issue of Jonathan Crane now being at large, a figure that obviously won’t adhere to Penguin’s crime licensing racket. Penguin continues to preach the ineffectual and corrupt history of the GCPD to the citizens nonetheless, and at this point, it seems like even the cops themselves are on his side. Gordon, as expected, isn’t falling in with Penguin’s rhetoric, but even Bullock is helpless to stand by him in this case, since he knows that will make the other cops completely lose faith in the office of the law. This was a really difficult and appropriately dramatic moment, as Bullock has to make the very difficult decision to send Gordon into danger alone when he refuses to listen to reason, which helped to cover up the fact that we’re getting the umpteenth ‘Gordon inspiring the GCPD’ storyline here. 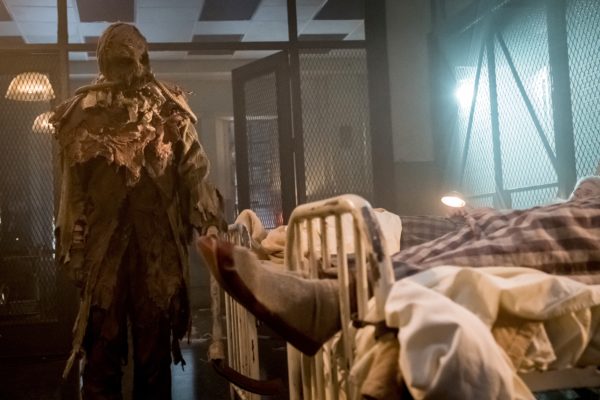 Gordon’s first proper confrontation with the fully-realized Scarecrow in Arkham Asylum was also pretty awesome, at least for television standards. After gassing the warden (who very conspicuously looks like another false Joker after being consumed by his fear of clowns), Scarecrow proceeds to gas the inmates with his fear toxin, as well as Gordon himself. This results in an effectively creepy and squeamish cameo from Morena Baccarin, as Leslie lays in a bloody bathtub, cursing Gordon for ruining her life. Gordon almost slits his own wrists as a result of the fear-induced vision of Leslie, but manages to overcome the toxin through sheer force of will. Yes, many Batman/DC fans will probably call bullshit on this, along with the fact that the patients are easily cured by water before Scarecrow conveniently gets away, but I suppose it also makes sense that Crane’s fear gas would be far from perfected when it’s this early in his criminal career.

Bruce also got a fairly solid storyline in this episode, as he’s arrested for being caught at the scene of a break-in, though is quickly bailed out (isn’t he a minor anyway?), and sent home. Lucius Fox questions him on the way out though, not so subtly hinting that he’s fully aware of what Bruce is actually doing with his nights. Seeing Lucius exchange witty vigilante banter with Bruce is as cute as ever, and definitely echoes the feel of Batman’s proper adventures in dedicated Batman media and comics, though it does beg the question of exactly how Lucius put together that Bruce is a vigilante. This just kind of came out of nowhere, even for a guy as intelligent as Lucius, and it might have been nice to spend a few episodes with Lucius slowly putting the pieces together, rather than just psychically determining that Bruce is becoming a budding superhero somehow. 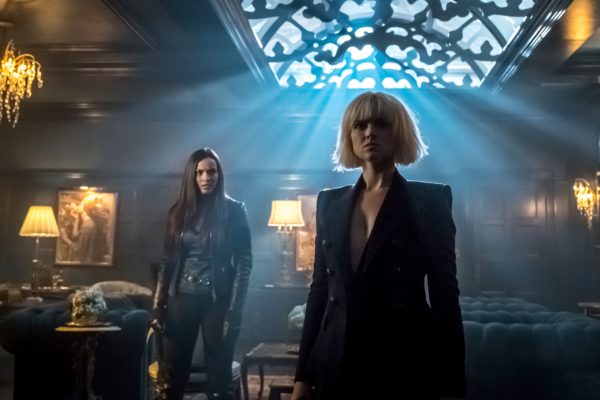 Then again, the conflict between Bruce and Alfred, while treading some familiar notes with early Batman origin stories, was fairly decent in this episode. Bruce is quickly becoming arrogant with his vigilante abilities, while Alfred admits that he can’t stand by and watch Bruce get shot. Bruce gets angry when Alfred starts following him to crime scenes and bailing him out soon after this, but this is another interesting story device that feels like it’s done and over with a bit too quickly, due to Lucius providing a quick and convenient solution. Again, it’s great for Batman/DC fans to see Bruce start getting some of his proper Batman tech from Lucius, even if he still has yet to properly wear the cape and Batman symbol, but this still feels like it’s happening pretty quickly. Are the showrunners suddenly worried that Gotham isn’t going to get a fifth season or something? What’s the rush?

Probably the most shocking storyline this week however revolved around Tabitha and Selina, who are both contacted by a mysterious party, beckoning them to a hidden location. Turns out, that mystery person is none other than a very-much-alive Barbara Kean! Barbara hand-waving her apparent death from the third season finale away is fairly amusing, though her hints of a rich benefactor that isn’t stopped by death does suggest that she’s working for someone very powerful and very dangerous. We don’t know who this person is, but the evidence does seem to suggest that Barbara is now in service to Ra’s Al Ghul, especially since Ra’s could feasibly resurrect Barbara with little trouble, while also having more than enough riches to buy her a lot of guns! Considering that Ra’s still has Gotham City in his sights, and considering that Barbara wants to profit from Penguin’s crime licensing system, is Barbara’s entire business being funded by Ra’s as an incredibly subtle and clever way to have Gotham City slowly destroy itself? I guess we’ll have to see.

Whatever the case, there were plenty of awesome scenes with the re-branded Barbara, between Penguin threatening to take her out if she steps out of line, Tabitha demanding Barbara’s hand as a trust gesture, only to stop short of slicing it off, and Ivy sneaking into Selina’s and Tabitha’s place to claim that she wants in with Barbara too. This hint that Ivy actually hates Penguin and wants to strike back at his goons is certainly promising, though yet again, this results in another hasty, rushed story turn, as Ivy goes into a random Asian apothecary and takes a random cocktail of potions to presumably accelerate her superhuman transformation into Poison Ivy. Seriously? I hope this isn’t the last ingredient to fully giving Ivy her super-villain identity from DC Comics lore, because if it is, that was a really lame way to turn her into Poison Ivy, regardless of how appealing she may end up becoming on this series as a result.

“The Fear Reaper” is a satisfying episode when it comes to entrenching Gotham ever deeper into Batman lore, but the rushed story elements here and there are nonetheless a disappointment. Considering that we’re right at the start of Season Four, I find it hard to believe that the showrunners don’t have time to give Lucius a more logical reason for suspecting that Bruce is a vigilante, or don’t have time to give Ivy a more natural way to turn herself into a superhuman freak. Still, Jonathan made a pretty strong impression in his first proper Scarecrow attack, while the surprise return of Barbara also presented no shortage of excitement and promise. Even with its occasional stumbles, Gotham isn’t struggling to entertain, and it still seems like there’s plenty to look forward to this season, especially when we now know for sure that the threat of Scarecrow certainly isn’t one to take lightly!