Have you heard of a movie called Don’t Knock Twice? If not, you’re likely in the majority, as the lower budget horror movie released to little word of mouth (or advertising) a year ago. Yet, despite its almost unheard of status, the film has somehow done enough to warrant a video game tie-in so long after its debut. One that, for most folks, will be an easy pass.

Originally released onto other platforms back in April, Don’t Knock Twice comes to Xbox One without the VR functionality that it had on at least one other device. It’s been developed, published and promoted through Wales Interactive, a Great Britain-based publisher that previously worked on games like Soul Axiom, Coffin Dodgers, Knee Deep and The Late Shift.

At its base, this is an experience that was designed to mix the trappings of the walking simulator genre with the scary elements of horror movies. The best way to describe it, though, would be to call it a trip through a haunted house, wherein the player must find special items that combine to summon the powerful witch, Baba Yaga. It is she who happens to be the antagonist here, although she’s only seen two or three times during the game’s one to one-and-a-half hour long run time. 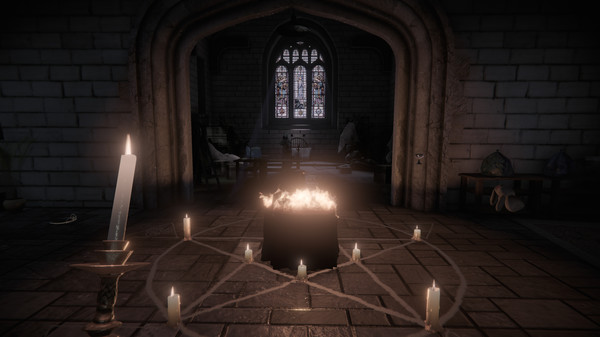 There’s no introduction. You simply find yourself in an old fashioned living room, complete with a perfectly fitting (and roaring) fireplace. The crackling and spitting flames add ambience, and are needed to light your candle (which is pretty much your only light source, since your cellphone is oddly useless), but it’s the phone that will draw your attention first due to its spastic vibrations.

The text you’re about to read is from Chloe, the daughter our character (Jess Webb) sent away while fighting an addiction that made her an unfit parent. Now, clean and sober, with a successful career as a renowned sculptor and artist, Jess has made plans for Chloe to return home, but the girl isn’t so happy about it or very impressed with her mother overall. After all, it’s surely hard to not feel abandoned and unloved after such a situation.

As you’ll learn, Jess and her daughter are living a new nightmare, which has a lot to do with the original witch, herself. Child eating Baba Yaga has invaded their home, and isn’t afraid to do whatever is in her power to scare and torment the woman and her kin. The problem here, though, is that there’s little to those powers — at least not in this game. Baba Yaga may cause a painting to fall here, a hand to come out of a fly filled tub there, or jump out at you once or twice, but that’s about it. She’s pretty benign otherwise, outside of the odd creak, knock or slammed door. Thus, Don’t Knock Twice doesn’t really live up to the potential that its premise offers, much like the film it’s based on.

Keep in mind that this story is merely told through optional diaries, newspaper clippings and things like that, meaning that those who rush through (and avoid picking up all of the highlighted items) won’t have much of an idea of what’s going on. The good thing, then, is that every single collectible page or snippet glows white and gold, making it tough to miss any of them. Hell, I was able to find all 26 in one playthrough, and without much trouble at all. It’s the hidden Russian nesting dolls (which are out of place, but are an easy choice for in-game collectibles) that are hardest to find, as the tiny little buggers can be tough to spot in the pitch dark.

Earlier in this review I mentioned a candle, which can be a helpful aid and key to progression if you wish to make use of it. The house may be pitch black, but it does have unlit candles spread throughout its interior and exterior areas that can be lit and used as guiding light. If you choose to avoid lighting them — which is possible by being very careful and keeping your cellphone out instead — then you’ll earn an achievement worth 100 points. Of course, some will care about this, while many won’t.

Truth be told, Don’t Knock Twice‘s biggest selling feature is its easy achievements, even if they are meaningless. The gameplay, itself, is very mediocre, as is the experience as a whole. There’s simply not enough to it, and it surely loses a lot without being in VR.

There is a bit of gameplay to be found here, though. In addition to walking throughout this rather small house, and searching for items while doing so, you’ll also come across segments where a lighter and hairspray combo is necessary to light obstructive branches on fire. Tiny axes (which look more like hatchets than anything else) can also be found in a few different places, and they’re a vital part of your progression. That’s because many of the doors are locked and need to be opened by way of breaking their handles.

The axe is both a help and a hindrance, because it can’t be cycled to at will, and is a right-hand tool unlike the aforementioned phone and candlestick. This is important to mention, because it’s your digital right hand that is used to open doors (by grabbing, then pulling using the joystick), or pick up any environmental item. While it is possible to open doors when the axe is in hand, your cursor needs to be right on, else the axe will get tossed to the ground. As such, you’ll often drop or accidentally throw it away as a result of the game’s very clunky mechanics, as well as how it becomes second nature to press the right trigger in order to do things in-game. Swinging the axe is handled by pressing the right bumper, but it’s hard to get used to.

If you go for all of the achievements, you’ll likely fall victim to this mechanical issue more often than others. I say that because there’s a specific basketball that you must find, pick up and carry from one part of the house to another. Well, to its dilapidated brick exterior, to be exact, as that’s where the hoop is. Doing so would be simple in any other game, but this one makes it difficult by also mapping the ball to the right hand and right trigger.

Although it’s basic and lacks a creative identity, the biggest issue with Don’t Knock Twice is how clunky it is. Its length issue is secondary, with how easy its puzzles are coming in third.

Prior to playing this game, I had heard — by way of a trusted friend — that it was terrible. However, as a horror fan, I wanted to give it a shot and come to my own verdict. Unfortunately, it didn’t end up being much better to me than it did to him, and simply exists as a mediocre experience on Xbox One. Perhaps virtual reality makes for a much better experience, but I can’t say for sure.

As far as the presentation goes, there’s little to really write home about. It’s easy to tell that this is an indie game, and one that wasn’t exactly made with a big budget. Its visuals and audio do the job, for sure, but a dated engine leads to far from spectacular graphics. The audio fares better, though, with some creepy effects (like random knocks, slammed doors and creaking sounds) adding up to create some half-decent tension at times. The game simply fails to deliver on a lot of what is created.

At the end of the day, Don’t Knock Twice is hard to recommend to anyone but the most diehard members of the horror and achievement hunter camps. While it’s not terrible, or even downright bad, there’s little to it and very few things stand out as being good or well designed. Thus, as much as I hate shitting on indie games, this is one that I’d recommend avoiding.

Don't Knock Twice Review
Don't Knock Twice is unfortunately rather listless and uninspired, especially without its VR capabilities. Skip this one, unless you love horror, crave achievements or can play it on some sort of virtual reality device.
Storyline48%
Audio61%
Visuals50%
Gameplay33%
The Good Stuff
The Not-So-Good Stuff
2017-09-29
48%Overall Score
Reader Rating: (0 Votes)
0%