Fear the Walking Dead hit a bit of a rough patch in last week’s episode, having to force a herd of Walkers to suddenly come down on Broke Jaw Ranch, under very ludicrous circumstances. This week’s episode, “This Land is Your Land”, nonetheless picks up in the fallout of that herd, forcing Alicia to try and lead the ranch’s survivors in an underground cellar alongside Ofelia and Crazy Dog, while Nick and Troy desperately try to survive the herd on the outside.

For the most part, “This Land is Your Land” was a noticeably better episode than last week’s offering too, presenting a lot of great tension from both perspectives. Alicia’s storyline felt particularly strong for most of the episode, going back to the classic idea of trying to manage a group of survivors and prevent them from panicking amidst an impossible situation. This impossible situation comes about when the ventilation system in the cellar appears to be broken all of a sudden, giving the ranch’s people just a couple of hours before they die of carbon dioxide poisoning.

Separating Ofelia and Crazy Dog to go into the vents and try to deal with the problem provided a fantastic opportunity for Alicia to be thrown in the deep end as a would-be leader, having to try and formulate a solution to the air problem. Unfortunately, it soon becomes evident that several of the survivors are bitten, and in order to conserve air, the bitten people have to be euthanized. Thankfully, a convenient super-painkiller is on hand to knock out every bitten person before Alicia is forced to kill them by stabbing them in the brain, but even still, the traumatizing effect that this has on her is very palpable and emotional. This is easily the hardest thing that Alicia has had to do since the world ended, and Alycia Debnam-Carey really delivered an especially powerful performance this week because of that.

The scenes that Alicia shares with another ranch citizen named Christine were also consistently well-done, as the two recount their pre-apocalypse pasts. Seeing the two generations of survivors united by different idealizations of their life before the end of the world made for several very beautiful moments, especially when Alicia recounts a touching childhood story about Nick, whereupon she also admits that she looked up to Nick even more than her father. This also made it all the more dramatic and tragic when Alicia later has to put down Christine the same way as the bitten people towards the end of the episode, when she succumbs to oxygen deprivation.

As great as many of these scenes with Alicia are however, it’s around this end point that the episode does come apart a bit, namely by having to contrive more outlandish scenarios to keep the plot moving forward. There’s an exceptionally hair-raising climax that occurs when Alicia and everyone else suddenly pass out, and Alicia suddenly wakes up to several Walkers shuffling around, having to fight them off while Ofelia and Crazy Dog race to fix the vent. This is kind of cool on paper, but like Troy somehow leading an entire Walker herd to the ranch by himself, it’s also excessively unrealistic in execution. The hard truth is, if everyone else passed out and died from oxygen deprivation, then Alicia should have as well. The fact that Alicia somehow has the strength to fight off several Walkers in this scenario is even more ridiculous! Alicia never should have made it out of the cellar, and it’s annoying to see Fear the Walking Dead clearly write itself into another corner here, as it needs to find an excuse to have Alicia survive, while also conveniently doing away with literally all of the ranch’s citizens.

It’s also a little overly convenient that Madison, Strand and Walker happen to show up right when both Nick and Alicia are pretty much screwed. Nick and Troy spend the entire episode simply trying to survive, and they simply end up bailed out by Madison’s party after being trapped in a helicopter by Walkers, so there’s not much to say about them, even if this was nonetheless thrilling to watch. Ofelia and Crazy Dog meanwhile eventually discover that a Walker being trapped in the ventilation fan is why the air stopped flowing to the cellar, even though this is also a bit head-scratching. How did just one Walker fall into the vent from an entire herd? Moreover, why is the vent managed by a big hole in the ground that immediately drops into some fan blades? That’s pretty damn dangerous, even for living people! Even assuming that the blades somehow didn’t cut through the Walker’s rotting body (that’s another stretch), this payoff to the vent issue was another forced contrivance, and that’s irritating, considering how riveting and intelligent a lot of the writing for this season of Fear the Walking Dead has been up to this point. 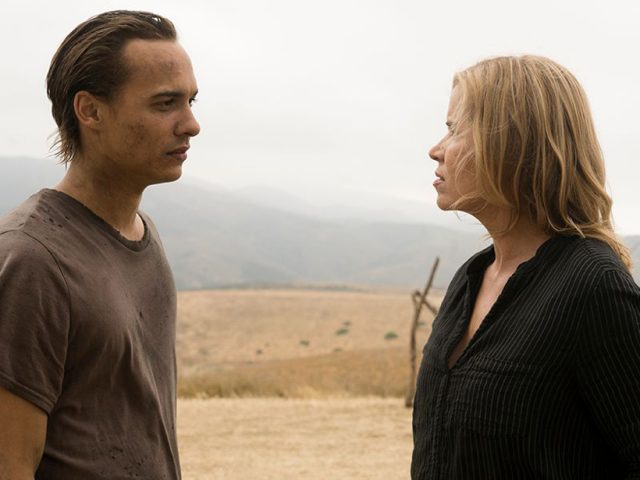 Finally, the episode also ends by forcing yet another separation for the characters, and as you can imagine, it doesn’t totally add up. Alicia learns from Nick and Troy that Jake has died after being pulled out of the cellar, and she suddenly decides that everything is hopeless, and she needs to go off somewhere else to contact some other mysterious party. Uh, pardon me? This is frustrating, because, not only does Alicia going off on her own make no sense, and provide another forced excuse to separate the lead characters for the season’s climax, but it almost makes Madison’s return trip to Broke Jaw barely even matter, since Nick ends up following Alicia with Troy. Ofelia does at least get on Madison’s truck with Crazy Dog, so they should ideally have her handy for Daniel next week, but it really feels like Fear the Walking Dead needs to tighten its writing again. The way that the show handles the destruction of Broke Jaw Ranch is ultimately very clumsy, and as Madison said, there’s no reason why that ranch shouldn’t have worked as a safe haven.

So, by the end of this episode, Broke Jaw and its people are no more, and most of the Nation’s people have bitten the dust with them. “This Land is Your Land” at least only started tripping up towards the conclusion, making it far more satisfying an episode than last week’s problematic offering, but I really hope that these story contrivances start going away next week, now that we’ve finally gotten the thankless duty of destroying the ranch out of the way. Even if the character separation is forced, Alicia trying to make contact with a new settlement should hopefully start laying some decent groundwork for the already-confirmed Season Four of Fear the Walking Dead next year, while we can finally, hopefully get the Daniel/Ofelia reunion that’s been built up all season next week as well. There’s only two weeks left to cover everything else in the show’s third season, so here’s hoping that this past couple of weeks’ storytelling bumps at least give way to a strong conclusion that’s befitting of the series’ strongest season yet.