NOTE: This episode of, “Arrow” is not set to air on Canadian channels until Wednesday, October 18th, due to being pre-empted by football on CTV Two.

NOTE 2: Full spoilers for this episode of, “Arrow”, including a major character death, are present in this review

Arrow certainly ended its superb fifth season on a bang, literally, as Adrian Chase, in a final act of vengeance against Oliver, blows up Lian Yu, while Oliver’s surviving friends and family are still on it! This was a really shocking final twist, as Oliver’s past and present violently collide in the final stand against Prometheus, with only Oliver and his son, William definitely surviving in the huge cliffhanger ending to the season, with the answer of who survived and who didn’t finally being answered in the Season Six premiere of Arrow this week.

Frustratingly though, that answer didn’t prove to be worth the wait. Just like the previous season premiere of sister series, The Flash, Arrow ended up wimping out of its pretense of a violent shakeup to Team Arrow’s status quo, and instead didn’t really bother to change anything in any meaningful way. “Fallout” really doesn’t earn its title, since there really is no worthwhile fallout to speak of. Pair that with a disappointingly weak storyline, and a flashback structure that really doesn’t work (the showrunners have claimed that Arrow’s trademark Lian Yu flashbacks are done as of this season, so I guess this is one last throwback to them), due to the show’s refusal to make a serious change to the character roster, and you have what’s sadly the worst of this week’s four season premieres for The CW’s veteran DC shows. 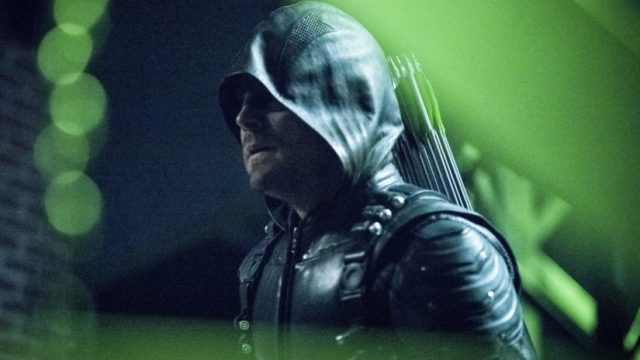 In case you haven’t inferred it already, I’ll quickly answer the question of who died on Lian Yu; Nobody, at least nobody on Team Arrow. Yes, really. Despite the massive dramatic potential of forcing the team to pick up their vigilante careers while being down a member or several, which would mark an actual cost to the lenghty and sinister campaign of Prometheus, Arrow ultimately leaves every single person on Oliver’s crew alive, as they all inexplicably survive a wave of high explosives. The only fully confirmed character death is Samantha, the mother to Oliver’s son, William, and the season’s trailer already blatantly gave that away. To be fair, Thea also ends up comatose after ending up with the most injuries, but that’s probably not going to stick for long. It’s possible that Talia and Nyssa both died on the island, but this is intentionally left ambiguous, in case the show ever wants to revisit the League of Assassins down the road. Hell, I’m not even truly convinced that Merlyn died, frankly, given that guy’s aptitude at cheating death!

So, immediately, we have a really crappy resolution to last season’s cliffhanger, which, like the similar circumstances of The Flash, pretty much leaves Arrow operating on business as usual by the end of the episode. This is a big part of why the flashback structure doesn’t work, as the episode awkwardly shifts back to Lian Yu right after Chase’s bombs at times, gradually checking in with characters to let us know who survived, and that’s it, since only Samantha died. This is initially kind of thrilling, but when it becomes apparent that there are no fatalities among Team Arrow, this flashback style quickly becomes annoying. The show actually does make it seem like Thea died during these flashbacks, in fairness, but when we see that she’s in a stable medically-induced coma, that drama quickly gets deflated too. We see Oliver alluding to having a more difficult job at City Hall without Thea, but this isn’t really shown, just told, so it doesn’t feel like it matters. 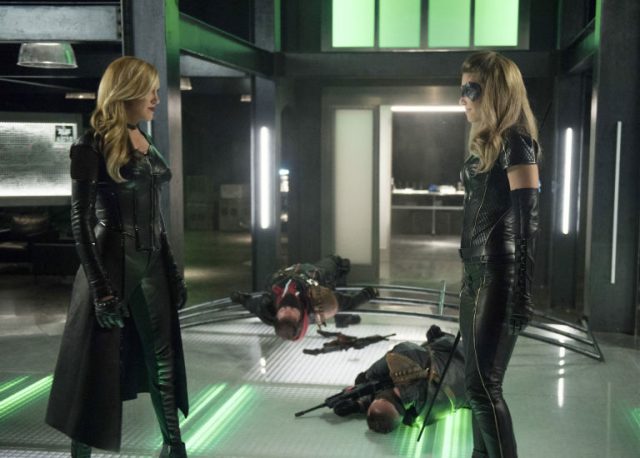 But what was good in this episode? Well, as usual, the action scenes were at least fast-paced and well-choreographed as ever, with Team Arrow fighting some mercenaries hired by Black Siren, who attacks the SCPD precinct (how does this city keep finding cops to hire?), before tricking Team Arrow into leaving their lair so that she can steal a prototype T-Sphere. Seeing Lance struggle with the Earth-2 Laurel’s presence does actually lead to some better story material too, especially when he lets Black Siren walk away after her attack on the lair, finding himself unable to shoot the woman who looks like his dead daughter twice in a row.

Once again though, this sadly ends with deflated drama, as Lance having to shoot Black Siren in a previously-unseen moment on Lian Yu, in order to save Dinah’s life, could have been a really great, heart-wrenching scene, and something that would have realistically driven Lance back to the bottom of a bottle. It’s just too bad that the show inexplicably allows Black Siren to survive and menace the city, in one of the laziest survivals amid an entire host of lazy Team Arrow survivals. Yes, I know that Katie Cassidy is a series regular this season, but then, why bother having Lance shoot Black Siren on Lian Yu in the first place, when we know that she’s obviously not dead? 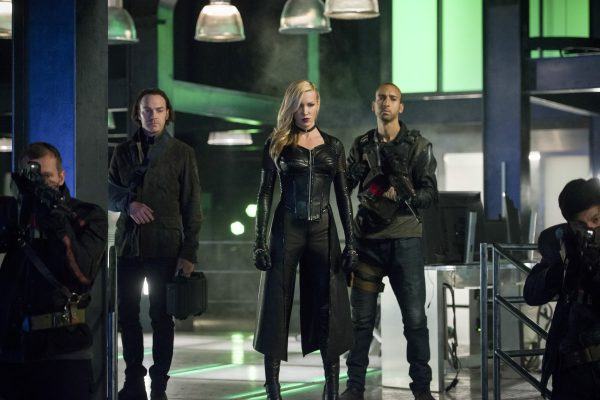 The scenes with Slade were also a bright spot in an otherwise lacklustre season premiere for Arrow, complete with Slade even returning to Lian Yu after it blows up, to help Oliver look for survivors. Oliver’s intel on Slade’s lost son apparently pans out as well, with Slade announcing that he’s going to Calgary to reunite with him. Slade also proved to be the best element of a strained Oliver/William relationship, as Slade warns Oliver that his vigilante identity might eventually cost him his relationship with his son. Sure, this is a repackaged conflict for Oliver, but the parallel with Slade and the quest to reunite with his own son helped to save that.

I do wish that William’s grief and anger towards Oliver was more realistic though. I get that grief is unpredictable, and Oliver’s essentially the reason that his mother is dead, but surely William is smart enough to know that Oliver wasn’t directly responsible for Samantha’s death. Blaming Oliver in this case just feels like forced drama, and makes William look very unlikable. Still, the series may not drag that out, thankfully, as Oliver manages to convince his son to watch a baseball game with him at the end of the episode, suggesting that there’s hope yet for Oliver’s relationship with William. 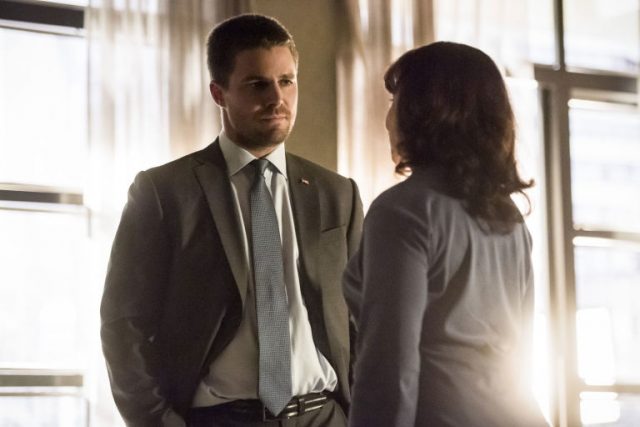 “Fallout”, much like this past week’s season premieres for Supergirl and The Flash, is still shedding some molting from the previous season, but the difference with Arrow is that its previous season was superb, with few noticeable weaknesses. That’s why it’s a huge let-down to see Arrow suffer through such a sub-par, disappointing season premiere, with even The Flash’s comparably weak season premiere having more excitement and more satisfaction by the end. The Black Siren attacks may have led to some solid action scenes, but they didn’t feel that fulfilling in terms of the storyline, and that’s before we struggle with inessential flashbacks, some problematic William scenes, and a wealth of missed opportunities in terms of actually costing Team Arrow something in the wake of their battle with Prometheus. The worst they got there is Lance struggling to shoot Black Siren dead (which is understandable), and Diggle having a shaky trigger finger (which seems to come and go as the plot demands). That’s it? Hopefully, with the episode ending as Oliver’s secret identity is exposed on the news, Arrow moves on to better storylines next week, and actually finds its dramatic footing again.