Turtle Beach is known for its quality audio headsets–hell, it’s a company built around them–and their latest entry in the Ear Force Stealth series is their first foray into utilizing Xbox Wireless for a seamless Xbox-focused experience.

Comfort is the first thing you’ll notice with the Stealth 600 series. Earcups are extra cushioned, and provide a ton of support while being passive noise cancellation. The foam is extremely comfortable, even for hours at a time, and there’s none of that jaw wriggle that is needed when you take off a set of tight headphones after a marathon gaming session. The microphone on the side also flips up easily to know for sure that your voice isn’t being transmitted to anyone on the receiving end of the game.

With all that comfort, audio is still key to the experience. The engineers at Turtle Beach have developed a way to get surround sound experiences without four speakers, a woofer, and a tweeter all set up with meticulous angles in your living room. The Stealth 600 uses Windows Sonic Surround Sound to deliver immersive sound when connected to a compatible device, and the company has developed something called Superhuman Hearing which allows players to hear even the faintest of footsteps and enemy reloads in the background of the game, giving them that slight additional edge.

The Xbox component here also brings the unique lime green aesthetic to this controller (compared to its blue PlayStation counterpart), but more than that, of course, Xbox Wireless means you can connect the headset to your console with the built-in frequencies that standard controllers and other peripherals use. It means that Cortana is always listening, and that the console itself knows what you’ve connected and how to work with it. 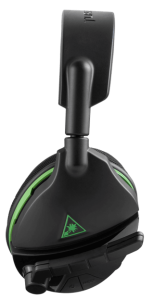 There is a small caveat, though: the headset may require a firmware update through a computer every now and again. When we first got this headset, audio was dropping in and out pretty frequently. A quick firmware update (literally sub-two minutes) by connecting to a computer with the included USB cable, and all those problems went away. The audio is crisp and clear, and we’ve heard maybe two stutters in playback over a solid 40 hours of gaming in the last two weeks.

Battery life is up to par with what we’d expect from a headset like this at roughly 15 hours, and while that isn’t a ton for constant streamers, it’s more than enough for a few days worth of gaming for hardcore players. The micro-USB cable is constantly hanging out of the side of the Xbox One we use, and it’s no hassle to plug it in every other gaming session to make sure we’re running on full juice. It would be nice to have an audible battery percentage when the headset is switched on, though.

In all, the Turtle Beach Ear Force Stealth 600, ridiculously long name aside, is a fantastic choice for a gaming headset and is a relative steal for a penny under a hundred US dollars. For those who want to step it up even further, the Stealth 700 series offers active noise cancellation and 7.1 Surround Sound for just $50 more. Compared to first-party headsets offered by companies like Sony for their respective consoles, and with fewer features, Turtle Beach is has an outstandingly compelling offer for those in the market for a dedicated gaming headset.