Supergirl managed to deliver one of the better season premieres among The CW’s rather uneven premiere week last week, and fortunately, Season Three’s sophomore episode continued to improve the storytelling. “Triggers” is still merely a good episode of Supergirl, not an especially great one, but at least it considerably tightened up Kara’s previously problematic Mon-El angst, while continuing to build on the promising development of Lena Luthor buying CatCo.

Morgan Edge was absent in this episode, but that’s fine, since this allowed us to more heavily focus on Kara’s personal development, as she continues to clearly prioritize her Supergirl identity over her civilian identity. This leads to an interesting new challenge this week, when a metahuman criminal known as Psi, a recognizable enemy of Supergirl from DC Comics lore, begins robbing banks throughout National City. Since Psi can generate intense fear in anyone using her incredible psychic powers, even Kara is helpless to stop her from just walking in and out of banks with bags full of money. Hell, even J’onn is helpless against Psi’s massive psychic abilities, which paints a pretty strong picture of how dangerous she truly is! 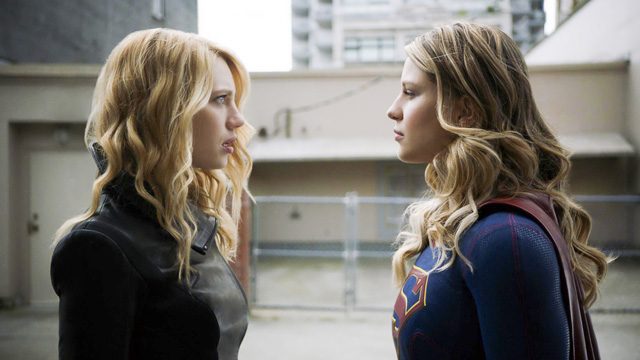 This is an initially promising setup for a very interesting and subversive metahuman threat for Kara, even if this potential doesn’t ultimately stretch too far. The way that Psi affects Kara’s character is noticeably more interesting than Psi herself, since Psi is another boilerplate villain-of-the-week for The CW’s current crop of DC shows, one that isn’t really defined at all beyond her love of instilling fear and robbing banks. Truthfully, the more noteworthy enemy to Kara this week is Kara herself, both as Supergirl, and at CatCo, where Lena quickly grows impatient with Kara’s unprofessional attitude.

Lena’s induction into the CatCo circuit was one of at least a couple of reasons why Kara’s storytelling was considerably improved this week. In last week’s season premiere, Kara’s lashing out and impulsive behaviour felt too much like an immature tantrum, in a rather frustrating callback to some of Clark Kent’s more insufferable tantrums during The CW’s previous Superman family-themed television adaptation, Smallville. In this episode however, Lena bluntly calling Kara out on her recent un-professionalism at CatCo, and Kara being forced to finally face the fact that she’s acting like a terrible employee, helped to ground Kara’s drama a lot more.

The other positive here is in the twist that Kara, who appears to be suffering claustrophobic attacks from Psi’s influence, related to her time in the Kryptonian pod before falling to Earth, is actually facing the fear of killing Mon-El by sending him away in a similar pod. This was a strong and justifiably emotional moment, as Alex must assure Kara that she saved Mon-El and didn’t doom him, in order to have Kara overcome her fear and stop Psi. We know that Mon-El is alive, albeit sucked into a wormhole (I’m still holding out hope that he’s joining the Legion of Super-Heroes in the future!), but Kara doesn’t, so the moment of confronting her actions at the end of last season did play well, and did allow her to take Psi out with a well-earned headbutt, before Psi is presumably shipped off to that special metahuman prison in National City that’s been mentioned a few times, but never really seen.

There was a subplot centering around Reign as well, or, as she’s now officially known in the civilian world, Samantha. Samantha’s daughter, Ruby begins to question if her mother has superpowers, after Samantha pulled a large metal tower off her with ease during Bloodsport’s attack in the season premiere, and this eventually leads to a fight with another girl at school. Again, I like this unexpected new take on a character that has recently become one of Supergirl’s most dangerous enemies in DC Comics lore, and if Samantha can keep up this effective character arc, she should likely become the big season villain that Supergirl truly deserves, after Non, Indigo and Rhea all ended up being considerably flawed. The hook of Samantha taking Lena’s place at L-Corp definitely continues to build on that promise as well, and should hopefully lead to some standout story material as Samantha presumably begins to eventually transform into the dangerous ‘Worldkiller’, Reign.

There were also small subplots between an increasingly tense Alex and Maggie, and a continually under-informed James, but these ended up lost in the shuffle of events that clearly favoured Kara and Samantha above all else. Alex and Maggie are starting to fight about seemingly everything relating to their wedding, and it’s starting to become possible that they may end up calling off the wedding before the season is done. I really hope that doesn’t happen, since Alex and Maggie really are a great couple, and as much as it would be cool to ship Maggie off to Gotham City to hopefully bring Batwoman into this show, I hope that prospect doesn’t come at the cost of permanently breaking Alex and Maggie up. As for James meanwhile, there’s not much to say about him, beyond the fact that CatCo’s owner and board members are still unrealistically keeping him in the dark about everything. I’m starting to wonder if James’ Guardian tenure is simply leading to him falling asleep in every board meeting, Bruce Wayne-style, since there’s no way he should be this deeply in the dark about all of the recent business dealings at CatCo!

“Triggers” was a very Kara-heavy episode of Supergirl, and that might have been a problem after Kara’s iffy behaviour in last week’s season premiere, but fortunately, the refined writing brought Kara’s emotional struggles over losing Mon-El to much better territory. We had to suffer through another bland, disposable metahuman criminal to bring up this compelling conflict with Kara, but it was definitely worth it, as Kara finally begins to slowly start healing from having to send Mon-El away to an unknown fate. We’re getting hints of brewing tension between other characters in the coming weeks, namely Lena and James, and Alex and Maggie, but it was once again Samantha/Reign that continues to stand as one of the season’s most interesting personalities, even very early on. I suspect we’ll be moving away from this earthbound drama next week though, as the episode ends with J’onn being psychically called to Mars by M’Gann, and I imagine that Supergirl will definitely be along for that ride!