Being a longtime fan of console-style Japanese RPG’s, I was all over last year’s I Am Setsuna, the debut effort of freshly-opened and old-school RPG-minded Square Enix subsidiary developer, Tokyo RPG Factory. It seems like Tokyo RPG Factory has a truly incredible productivity rate as well, since, around a year and a half after I Am Setsuna originally released for PS4 and PC (and PS Vita in Japan), and less than a year after I Am Setsuna expanded to Nintendo Switch this past March, we’ll already be receiving the developer’s sophomore effort!

Lost Sphear, the spiritual follow-up to I Am Setsuna, will be starting 2018 off bright and early with its snowy January release, and I got to go hands-on with not one, but two separate builds of the retro RPG throwback to see how it’s shaping up! The bulk of my preview impressions were had with the PS4 version of the game, though I also got to spend some time with the Nintendo Switch build, albeit significantly less. For what it’s worth however, I couldn’t discern any noticeable gameplay or presentation difference between the two console builds of Lost Sphear, beyond the Switch version allowing you to take it on the go, and the PS4 version naturally having trophies to earn. My time with the PS4 build of Lost Sphear was also experienced on a PS4 Pro, but there doesn’t appear to be any real advantage to playing on Sony’s upgraded 4K-capable console, so don’t fret if you’re an RPG enthusiast that’s content with the base/slim PS4 model, especially since this is a 90’s-inspired game with appropriately basic visual assets. 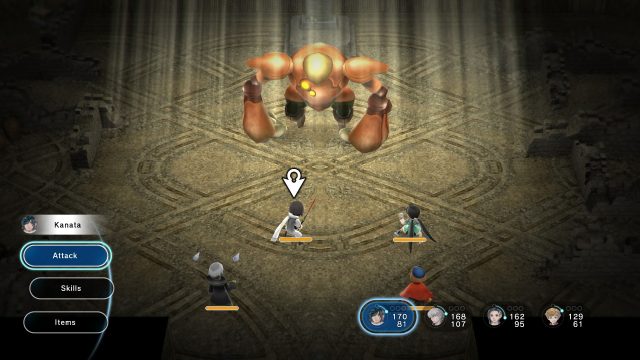 Regardless of your platform of choice, the game begins with a mysterious knight doing battle against an enigmatic, menacing figure, as bodies litter a castle-like environment. This mysterious scenario provides players a chance to dive right into the game’s battle system, which, just like I Am Setsuna, is an ATB-style turn-based battle system, where players get to act when a meter (in this case, a sphere with that character’s portrait), fills up, signaling a menu of commands to appear. The placement of allies and enemies on the battlefield, which can be knocked around and re-aligned depending on how attacks are used, might also open them up to vulnerable formations, such as line-based attacks being able to hit groups of enemies in a row, when they’d normally target just one foe. Once again, this battle system is quite clearly inspired by Square’s Super NES classic, Chrono Trigger, and longtime RPG fans will still find it quite enjoyable to work with.

After this intriguing and mysterious intro sequence plays out, the focus then shifts to a humble and pleasant village called Elgarthe, where we meet our lead protagonist, Kanata. In a very familiar JRPG opening scenario, Kanata and his friend, Lumina have to speak to the village elder, who just so happens to be concerned about a monster in the village! That sounds very pressing, especially when Kanata’s and Lumina’s friend, Locke was supposed to ring the village’s warning bell, only to disappear on the job! This certainly sounds like high stakes to start Lost Sphear off on, but fortunately, the game quickly displays a winking sense of humour that will no doubt tickle JRPG fans. How do I know this? Well, Locke isn’t missing. Turns out he just got hungry and took a nap on the way to the alarm bell, because I guess he does that. Did I mention that Locke is Lost Sphear’s comic relief character?

Oh, and that monster in the village? It’s a tiny green bird that you can pretty much take out with your bare hands. As with I Am Setsuna, Lost Sphear has clearly been put together by a team of people that are very passionate about JRPG history and conventions, and that includes lovingly poking fun at them with an intro scenario like this. I couldn’t help but smile as I took my ragtag band of adolescent would-be heroes to follow up my chilling ‘monster hunt’ with a trip to the nearby ridge to fish, even when that would normally be a dull prospect. This was of course after taking the time to wander around town and interact with the townsfolk, who all say seemingly irrelevant, but mostly amusing things, commenting on the cutely mundane status of their lives in most cases, or when their husband is spending too much time at the sauna. Also, dogs. So many dogs!

Outside of the village, in another cue taken from both Chrono Trigger and I Am Setsuna, the overworld is completely devoid of danger, and you can travel along it at your own pace, occasionally pressing the X Button/A Button to interact with a randomly-placed shiny spot to pick up a crafting ingredient, which I’m sure I’ll make extensive use of in the final game, even if these ingredients were pretty much just for show in this demo. You can also save at your leisure in the overworld, rather than trying to find a save point in a hostile area, though fortunately, you can use the Options Button/+ Button to make a one-use quick save if you suddenly need to leave the game halfway through a dungeon or something. Saving was disabled in the demo however, so I couldn’t try this feature for myself quite yet.

Upon reaching Elgarthe’s old fishing hole, Kanata and Lumina decide to try some fishing, which is done by simply pressing the X Button/A Button with the proper timing. I caught a few simple lake trouts at first, only to then snag a big catch, one so big that it’s seemingly impossible to reel in! Could this be a dangerous sea creature threatening to ruin our fun?! Oh, no, wait, it’s just Locke, who thought he heard a spiritual calling to jump into the lake and fish with his mouth like a bear, because of course he did. With our dinner thoroughly ruined, it looks like that’s going to be the biggest of our heroes’ problems at first, but soon after Locke’s latest proud lapse from common sense, the village bell rings! Looks like trouble back on the homefront! Thus, I quickly made tracks out of the fishing area, after beating up a few more of those helpless green birds, because I don’t care if they’re innocent animals, how dare they start a combat encounter with me!

Unfortunately though, I couldn’t find my way back to the village. Oh, it’s not because I’m bad with directions. It’s because the village literally disappeared off the face of the earth! This is where a key mechanic of Lost Sphear comes into play, namely the ‘Spritnite’ hook, with Spritnite returning from I Am Setsuna, albeit with altered applications in Lost Sphear. You see, the world of Lost Sphear is built on Spritnite, which is a magical force created by the memories and sentiments of intelligent life. With something in the world threatening the Spritnite foundation (it’s not clarified in the demo, but this is allegedly the work of some malevolent force called ‘The Lost’), various parts of the world of Lost Sphear have begun to fade away, leaving an eerie white glow in their place. Thoroughly mystified, our characters are merely left to make contact with a mysterious cloaked individual, who was just passing through and looking for a place to spend the night, only to see that the inn has been closed due to issues with being blinked out of existence. 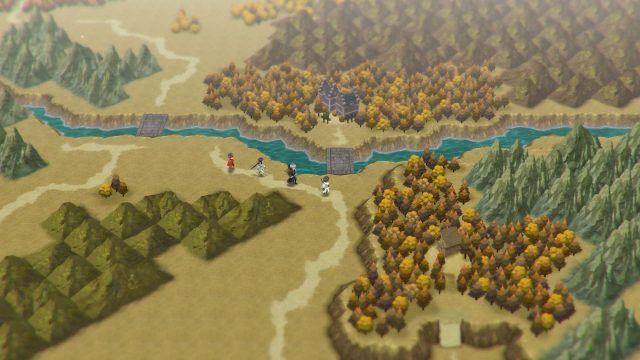 Panicked, my squad of heroes runs to a nearby cabin to look for supplies and survivors, with our new cloaked friend following along too, though all we found was a plot-convenient dream sequence, whereupon that mysterious knight-like figure teaches Kanata about Spritnite and fixing the world with it. Soon after that though, a boss battle against a big ugly plant fiend pops up outside, and it’s time to test out Lost Sphear’s first true boss encounter! With my characters not having any skills to their name, I simply had to tell them to keep attacking during the fight, while the cloaked man, who is apparently named ‘Van’, could at least make use of a simple magic skill that let him hurl dark energy at the plant monster. The boss battle wasn’t difficult, which is good, considering that most of my party only knows how to hit something until it vaporizes, and amusingly, even Van comments on my vapid combat strategy after the monster is defeated. It’s not my fault, Van!

But, alas, Van’s criticism is supposed to happen, since it provides an opportunity for him to explain the idea of equipping Spritnite stones to your characters, which can be assigned to attack skills or movement skills. I couldn’t experiment with movement skills in the demo, since none were available, but Van did teach me how to assign new attack skills to my party, which includes SP-consuming commands that give my characters more means to deal damage and exploit enemy arrangement. These skills include Locke being able to snipe enemies with an increased critical hit rate, or Kanata being able to do a special sword attack that ignores enemy defense increases, and it’s inevitable that there will be many other options in the final release of the game. There’s also one final wrinkle to combat that I should mention too (and one taken directly from I Am Setsuna), whereupon you can try to press the Square Button/Y Button with proper timing to execute a stronger attack combo, once a boost gauge has filled to a certain length. It’s a little thing, but it does add an appreciated new dimension to what’s otherwise pretty straightforward turn-based combat, especially at this point in the game.

After bringing Kanata back to restore at least part of Elgarthe with his new Spritnite powers (half of it is still a white void), I could essentially wander the simple environments, pick up shiny crafting items that are of no use to me (yet), or keep interacting with people. As you can imagine with such a simple foundation then, there isn’t a particular lot of flair to Lost Sphear, even on the super-powered PS4 Pro, but that’s not really the point. Like I Am Setsuna, this is a game meant for longtime lovers of classic Japanese RPG’s from the Super NES/PlayStation era of the 90’s, and that target audience will find plenty to enjoy on those merits, even if anyone who is not already an avid fan of old-school Japanese RPG’s probably won’t find much to hold their attention here, especially with the deliberately laid-back pacing. That’s all to be expected though, since, just like I Am Setsuna, Lost Sphear is clearly a love letter to an era of JRPG’s gone by, or at least one that was absent for a long time. 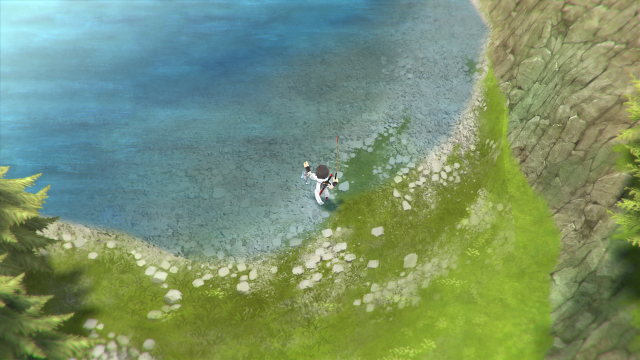 There’s definitely an effort to refine and further tweak the gameplay foundation of I Am Setsuna in Lost Sphear, namely with the altered Spritnite skill system. Despite those tweaks however, the frequent strengths that were already present in I Am Setsuna, namely its old-school, highly personable charm and breathtaking piano-heavy musical score, seem to have been maintained as strengths in Lost Sphear. It seems like Lost Sphear’s target audience is people who already enjoyed I Am Setsuna to some extent, so if that’s you, this is definitely a relatively quiet JRPG release to keep on your radar. It’s a smaller-scale RPG made for a select audience, but in this opening half-hour or so, Lost Sphear seems like a confident and enjoyable follow-up to I Am Setsuna, and I’m looking forward to re-living the golden era of Japanese RPG’s once again upon its final release.