Apparently, there’s still the frontier of virtual reality left to explore! After an ill-received shooting gallery-style VR offshoot that was demoed at trade events and eventually scrapped, Final Fantasy XV is approaching the launch of a properly-realized standalone VR spin-off in Monster of the Deep: Final Fantasy XV, which is exclusively being developed for PlayStation VR at this point. Rather than being a shooting gallery game this time, Monster of the Deep aims to be a fishing game with some shooting elements, allowing players to interact with the core cast of the four Final Fantasy XV protagonists, as they try to angle up some fish from the waters of Eos. It’s also worth noting that owning a copy of Final Fantasy XV for PS4 isn’t required to purchase and play Monster of the Deep, since it’s being treated as a completely standalone PlayStation VR game.

The concept sounds lame and ridiculous, but I was pleasantly surprised at just how much fun I ended up having during my short time with Monster of the Deep. It’s certainly not a very, ahem, deep game at first blush, as many current virtual reality games fail to be, but as a VR experience, it has some decent moments of fun, even if it’s cheesy fun that’s best enjoyed with friends. If you’ve already invested in PlayStation VR, then you’ve probably already encountered far worse VR gaming experiences on Sony’s headset, and that’s assuming you don’t also own the competing Oculus Rift and/or HTC Vive headsets from the PC gaming space.

I would still advise that you come in with proper expectations for Monster of the Deep however, since it’s definitely not nearly on the level of outrageous scale that the main Final Fantasy XV game boasts, naturally. After having my demo set up, and being handed two active PlayStation Move controllers (the game is also playable with the PS4’s regular Dual Shock 4 controller, though I could only test this demo with PlayStation Move controllers), I was quickly greeted by Prompto, one of the main characters from Final Fantasy XV, who let me know the basics of what I was about to do, and how I would be catching fish. The same atmosphere and visual style from Final Fantasy XV is mostly captured during interlude moments like these, beyond a bit more blur and grain in this case, due to the altered resolution of having to play on the PlayStation VR headset, rather than a sharper and potentially more capable television set. It also should be mentioned that this demo for Monster of the Deep was featured on a PS4 Pro, but since this is a PlayStation VR game, there wasn’t any noticeable benefit to playing on the upgraded console, beyond possibly some slightly hastened load times.

Playing Monster of the Deep isn’t difficult, but it definitely demands proper calibration if you’re going to use PlayStation Move controllers especially, as you can expect. Depending on where your PlayStation Camera is set up, you might need to make an adjustment or two to get both of your PlayStation Move controllers to register as ‘virtual hands’ in the game (some of Square Enix’s demo units were apparently a bit finicky, but thankfully, I got a good VR kiosk that didn’t present me with any game-interrupting issues), though this should be par for the course for PlayStation VR owners. Once you can see and properly move your hands, you pick up a fishing rod with one hand, then move that hand’s PlayStation Move controller to control the rod, complete with casting, while the other hand can grab and spin the reel by holding the Move Trigger and making a rotating motion. It’s fairly intuitive, and is generally perfectly responsive. 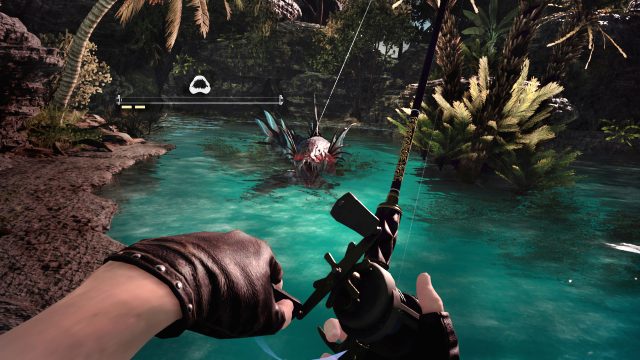 The only control hiccup I seemed to run into while trying to catch fish with the PlayStation Move controls was with casting, which felt a bit clumsy in my case. This may have been the one limitation of my own VR kiosk, but whenever I tried to cast from a seated position, as the game is intended to be played, I would have a hard time getting my line to fly far. In order to get my fishing line to avoid sinking like a stone a few inches in front of me, I would need to very slowly raise the PlayStation Move controller above my head, then very slowly make a motion forward. It doesn’t feel realistic, and is the one element of the controls that didn’t feel immersive or intuitive. Again though, this could have been a calibration issue, not an innate game issue, so it’s possible that casting your line will work just fine in the final release, at least if you have a reliable PlayStation Camera setup.

Once I managed to figure out a means of casting, I pressed the Move Trigger in my left hand’s PlayStation Move controller to activate sonar, which gives you an idea of where fish are hiding within whichever body of water you’re fishing in. The idea of course is to try and aim your cast line somewhere around where fish are located, and hopefully get a bite. Disappointingly, you can’t bob or shake your rod as you’re reeling your line in, eliminating a known tactic used by real-life fishing experts, but on the flip side, convincing a fish to bite your line also isn’t terribly difficult. If they’re anywhere in the immediate vicinity, you should get a prompt that a fish has taken your bait, at which point, you jerk the PlayStation Move controller holding your rod upward in order to snag the fish, and start reeling in.

This is the point where Monster of the Deep is at its most silly and engaging. You have to point the PlayStation Move controller designated to your rod in either a left or right direction, depending on what the game tells you, and if you fail to match the directional prompts, the fish may escape. While keeping the rod pointed in the proper direction, you also have to hold the Move Trigger on the opposite PlayStation Move controller, and rotate it to start reeling in. It naturally looks pretty ridiculous to a third party that’s watching outside of the VR experience, and there can be some fun in that, even if the gameplay mostly seems to be pretty brainless, at least in this demo. It’s not without its charm though, especially since you can use your PlayStation Move controllers to mimic putting a fish in a net after catching it, which is a satisfying cherry on top of successfully reeling in a fine catch. 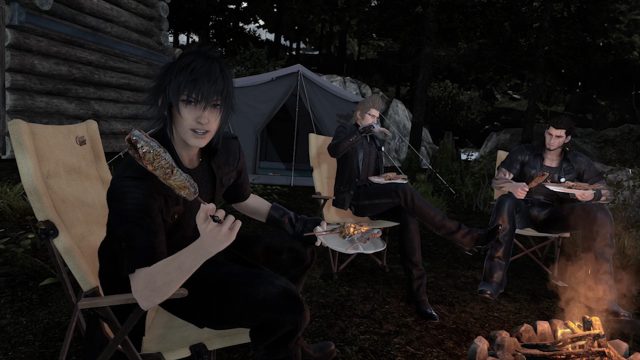 After a couple of decent catches, the game allowed me the option of taking a picture of myself while I played, giving me a nice quick peek at how silly I looked at a Square Enix press showcase while playing this PlayStation VR game, as well as a sudden look at the other journalists that were creeping over my shoulder as I did it! The surprise photo op is a funny way for players to see when their friends might be making faces or silently mocking them in the background, but again, this is something that’s obviously dependent on playing with other people in the area. I imagine that the photos taken here can be saved to your PS4 console and uploaded to social media with the Share Button in the final release, though unfortunately, I had no way of keeping my screenshot in the case of this demo. That’s a shame, since there’s a cute moment at the end of the demo, wherein Prompto hands you your photograph as if it’s physically there, and you have to actually hold the Move Trigger with your right hand to take it from him and place it on a plate with your seafood meal on it. That’s kind of touching in a goofy way.

Slightly before this moment however, I got to reel up a truly literal ‘monster of the deep’, which involves catching it as normal, before it attacks you! When this happens, the monster (or daemon, as monsters are known in Final Fantasy XV’s world), will bounce around, flopping in and out of the water, and launching projectiles at you, while you try and shoot back with a crossbow, using the PlayStation Move controller and its Move Trigger in your dominant hand, aiming in 1:1 motion. It’s very basic and there’s not a lot to it, and disappointingly, this did feel like a less effective throwback to Final Fantasy XV’s former shooting gallery VR idea. Again though, there’s still some fun to having people chuckle along with you as you play. If you’re playing Monster of the Deep by yourself however, I can see why it would feel like a basic, potentially unsatisfying experience at first glance.

Maybe, considering Final Fantasy XV’s themes of brotherhood, it makes sense that Monster of the Deep would demand an audience to get the most out of it, despite the fact that it’s a single-player VR game. Journalists that came with allies seemed to have the most fun with it (and luckily, I had someone with me who was also trying the game at another kiosk!), while the solo journalists seemed to be more lukewarm. Perhaps it’s true that almost any game is more fun when you have a crowd of friends in the room with you, but Monster of the Deep makes for an effectively cheesy distraction while it lasts, and one that’s a better and more enjoyable fishing game than you would probably think, albeit also a fairly simple one from this first impression. The only noticeable barrier to the experience is the rather lofty price, since Monster of the Deep is set to be sold for a rather expensive $29.99 USD/$39.99 CAN sum on the PlayStation Store, which is noticeably more costly than many other PlayStation VR games. If you’re interested, it might be best to wait for Monster of the Deep to go on sale, if you want the most value out of it.

I don’t imagine that this demo conveys every single nuance to the experience, in fairness, since I’m sure that Monster of the Deep gets more detailed and intense as it goes on in the final release. It will probably still best be enjoyed as another VR offering that’s more ‘experience’ than ‘game’, but for what it’s worth, I had fun with it. You’ll have the most fun with it if you have a group of friends handy, preferably friends that also like Final Fantasy XV and its richly detailed universe, but if you own a PlayStation VR headset and want a cheesy new way to mess around with it, then Monster of the Deep could be an amusing complement to the base Final Fantasy XV game, provided its high price doesn’t balloon your expectations.