Considering the immense beefing up of the technology behind the latest Dissidia Final Fantasy offering, you can also imagine that the game pretty firmly puts its PSP predecessors to shame in terms of style and intensity. Dissidia Final Fantasy NT continues the non-canon crossover storyline first established in the previous two PSP offerings, bringing not just all of the familiar heroes and villains from the arcade original, but also some all-new faces from more recent games in the Final Fantasy franchise, such as Final Fantasy XV’s Noctis, and Final Fantasy Type-0’s Ace. Personalities like Noctis and Ace have also since been added to the Japanese arcade game, but any updated characters and gameplay re-balancing since the arcade game’s Japanese launch in 2015 will come from day one in the PS4 release of Dissidia Final Fantasy NT. 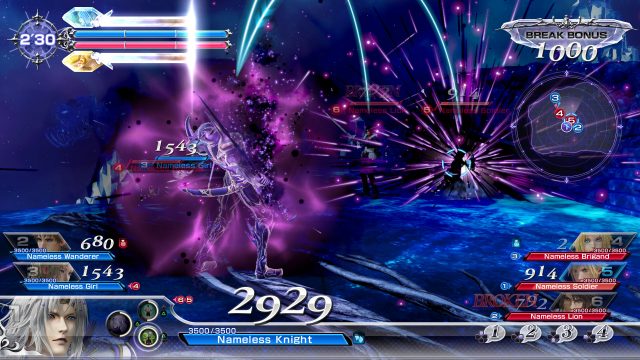 Disappointingly, I could only play a couple of matches during my time with the demo, and I also wasn’t able to do anything else beyond single fights, but I still had plenty of time to see why this action-packed fighter is worth paying attention to. Dissidia Final Fantasy NT is apparently going to lack a conventional Story Mode, though the game will nonetheless potentially offer more story insight into each of its characters, depending on how players participate in battles. This is likely because Dissidia Final Fantasy NT is meant to have a focus on arcade-style competition, so gameplay really is king here.

Fortunately, the rich and diverse roster of characters seem to feel very distinct and specialized from what I experienced in the demo, which was a bit more fully-featured than the recent Dissidia Final Fantasy NT closed beta, particularly since I basically had free reign to dictate who I wanted to fight as, contrary to the beta, where you were limited to the series’ main heroes. Even then, there were still a couple of unavailable characters, such as Final Fantasy III villain, Cloud of Darkness and Final Fantasy VIII villain, Ultimecia, which weren’t available in the demo because they haven’t been properly programmed into the game yet. That said, they will allegedly be in the final product once Dissidia Final Fantasy NT releases to the public early next year, so I was none too fussed about their omission from my early play test. 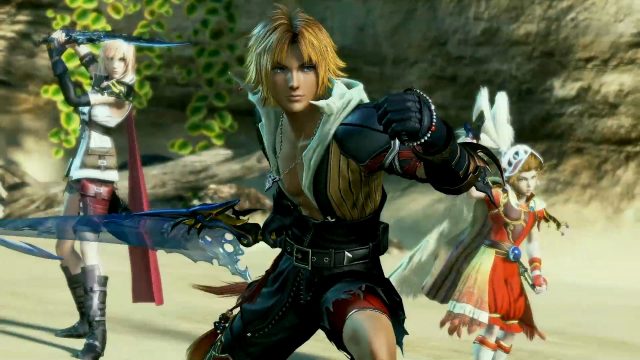 In my first match, I took control of Terra, protagonist representative of Final Fantasy VI, my personal favourite entry in the Final Fantasy franchise. After that, I was automatically flanked by Final Fantasy IV’s hero, Cecil, and Final Fantasy VII’s especially beloved villain, Sephiroth. Fighters are divided into one of four categories in Dissidia Final Fantasy NT, namely strength-focused Vanguards, speed-focused Assassins, range-based Marksmen, and unique Specialists. You can imagine that Cecil and Sephiroth are both very sword-focused fighters that get up close and personal with their foes (heck, you’d know that if you’ve played the previous PSP games), while Terra, being a character that’s all about magic, happens to be a very proud Marksman fighter.

This trait of Terra’s allowed me to stay back and hurl Meltdown spells at my foes, while Cecil and Sephiroth did the dirty work, but I nonetheless had to pay attention to what was happening! You see, your squad shares an overall HP meter, along with their personal HP meters, and while KO’d fighters will eventually get up and be able to rejoin the fray, if you take too much damage and your party’s HP meter runs dry, you’ll lose the match, even if most of the damage was sustained by just one fighter of the three. You also need to pay attention to your Brave Meter, which makes a return from the previous Dissidia Final Fantasy games, since taking too much damage without guarding or evading will result in your Bravery being shattered, leaving you open to all manner of nasty counter attacks from whichever foe is laying into you. This is because breaking your opponent’s Bravery drastically increases your own, making your fighter deal considerably more damage! Of course, you can’t have your guard up forever either, since opponents can eventually break your guard if you use it too much, leaving you defenseless and wide open to a flurry of damage, especially with how easy damage can add up in Dissidia Final Fantasy NT, if you’re smart with your play style. 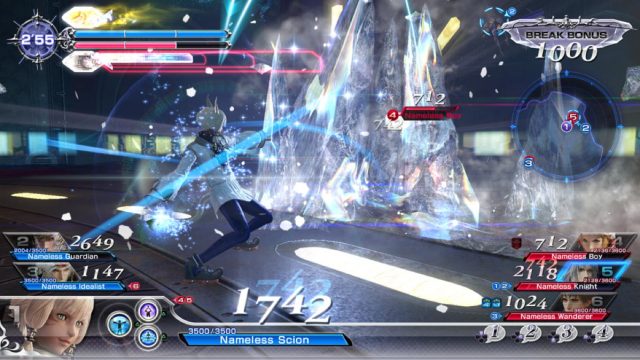 The core idea of Dissidia Final Fantasy as a whole is allowing players to realistically depict the high-flying, super-destructive combat that’s been displayed in more recent Final Fantasy games like Final Fantasy XV, as well as offshoot Final Fantasy movies like Final Fantasy VII: Advent Children. This sensibility is cranked up to eleven in Dissidia Final Fantasy NT, where the 60fps framerate makes the action smoother and more responsive than it could ever hope to be on PSP! Many of the Final Fantasy personalities have never looked better than they do here, and despite the somewhat complicated control scheme, you’ll love being able to leap around, sling spells, swing swords, and perform all manner of devastating attacks with the right button commands. While it was a bit of a cheap strategy, I did manage to win the match with Terra by mostly hanging back and spamming magic with the Square Button, though this could also be because my allies’ A.I. seemed very competent, with Cecil and Sephiroth able to hold back the opposing squad of Kuja, Warrior of Light and Zidane pretty easily.

My second match was definitely a lot trickier, but that’s also because I chose to really venture off the beaten path and try to play as Final Fantasy Tactics’ hero, Ramza, an all-new character being added to Dissidia Final Fantasy NT, and one that wasn’t even available in the arcade game to start! Ramza is a Specialist, meaning that he’s a very technical character that can be very unpredictable in combat, but also requires a fair amount of skill to really use properly. I luckily had Final Fantasy VIII’s lead hero, Squall and Final Fantasy IX villain, Kuja on my side, which gave me a fairly balanced team, but I also happened to be against the deadly combo of Final Fantasy IV’s supporting hero, Kain, Final Fantasy VI’s villain, Kefka, and Final Fantasy Type-0’s hero, Ace. I mostly spent the match pinning Kefka and laying into him with Ramza’s sword (mostly because I just love to hate Kefka), but this was a far closer victory. I might not have clinched it if I’d not managed to use enough of my skills to fill my team’s Summon Meter, which allowed us to call the fire-themed summon spirit, Ifrit into combat, whereupon he rained his trademark ‘Hellfire’ attack all over the battlefield, decimating my opponents with enough damage to push me over the top!

It’s disappointing that I was limited to playing the demo solo, because a full team of three players all coordinating with each other and formulating a tightly-executed battle plan sounds like a fantastic prospect, one that would really elevate Dissidia Final Fantasy NT above most competing fighting games when it comes to strategy. As with its PSP predecessors, Dissidia Final Fantasy NT feels like something very unique, yet very true to the sensibility of Final Fantasy. The game’s large-scale battlefields and fully three-dimensional movement make it feel significantly more epic than your run-of-the-mill fighting game, and if you’re an anime fan especially, you’ll definitely appreciate the commitment to flashy, over-the-top combat that nonetheless does adhere to a set of rules and many potential strategies, even if they do require a lot of practice to get the hang of at times. 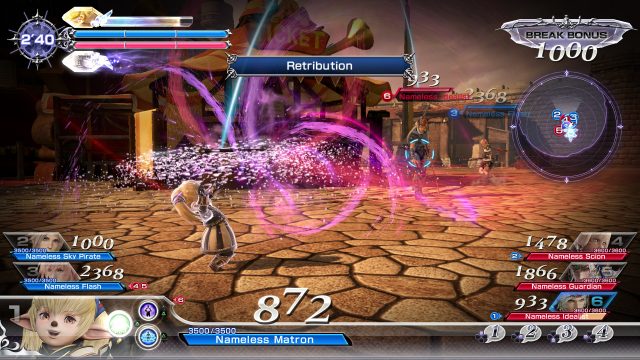 I should also mention that my demo session with Dissidia Final Fantasy NT was experienced on a PS4 Pro, and while I couldn’t assess the difference on a base PS4 model, I can say that Dissidia Final Fantasy NT definitely feels great to experience on Sony’s upgraded console. The performance almost never seemed to dip below a steady and speedy 60fps during my play session, and while the resolution on my display still seemed to be at a perfunctory 1080p, the game nonetheless looked gorgeous in motion, and even more so when I was allowed to savour the immense, lifelike detail in the character models and environments.

Square Enix still hasn’t fully specified the exact enhancements that Dissidia Final Fantasy NT will offer on PS4 Pro, beyond confirming that you’ll get some kind of technical boost if you play on the upgraded PS4 console, though from what I understand, the game still runs at 60fps on a base PS4 model during gameplay, and halves that to 30fps during cutscenes on both a base PS4 and PS4 Pro. I imagine that playing Dissidia Final Fantasy NT on a PS4 Pro probably gives you a more stable 60fps framerate with less slowdown, since I only noticed some very small frame dips when summon beasts were called into combat, likely because the summon cutscenes pretty clearly run at 30fps, and have to unfold in the middle of a 60fps battle. It’s also possible that Dissidia Final Fantasy NT may allow 4K TV owners to push the resolution up to 1440p on a PS4 Pro in the game’s final release, since the game’s glossy visuals do seem to invite that feature, though I couldn’t confirm that with Square Enix, unfortunately.

It’s no doubt impossible to get a complete grasp of just how much outrageous depth Dissidia Final Fantasy NT has to offer as a fighting game from just one solo demo session, and the fact that I couldn’t ultimately squeeze in many matches before I had to move on adds insult to injury. From what I’ve played however, this seems to be an initially intimidating fighting game, but ultimately a very exciting, novel and rewarding one too, if you’re willing to put the work into getting good at it. 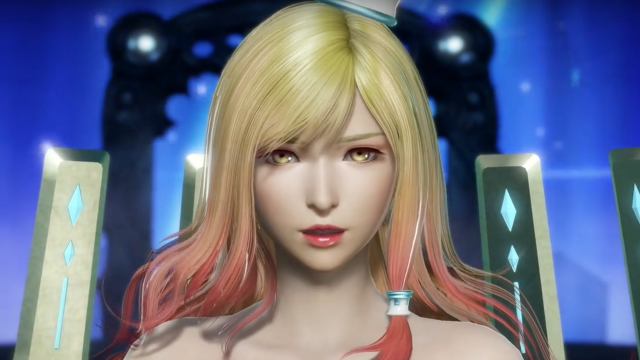 Final Fantasy fans will definitely enjoy Dissidia Final Fantasy NT, considering the sheer amount of beloved series personalities that are playable in the rather robust roster (with many more to come, apparently), while general fighting game fans that want something unique, yet smartly designed should certainly keep an eye on it too. As a way to bring Dissidia’s celebrated arcade experience to Western audiences, along with bringing the sub-series into the modern home console era, Dissidia Final Fantasy NT looks like it’s doing everything right, if you have the patience to learn the ropes at least. As both a Final Fantasy game and a fighting game on its own merits, this could very likely be one of 2018’s strongest sleeper hits!