Warning: This review will contain spoilers from the debut episode of Life is Strange: Before the Storm.

The last time we saw Chloe Price she was attempting to come to grips with lots of change, albeit in her own unique way. These weren’t small things, either, as threats of being kicked out of school, an altered home life and a strange relationship with a new and unexpected friend tend not to be. For starters, the teen was attempting to navigate a new world without her beloved father, who seemed to have been replaced in her mother’s mind by her new, asshole of a boyfriend. That would be enough to try to deal with, while also grieving, but the rest just added to the confusing life of a troubled teen.

Being saved from physical harm by Rachel Amber was both exciting and confusing at the time, and the relationship that the two quickly built ventured into unfamiliar territory throughout the first episode of Life is Strange: Before the Storm. What resulted was overwhelming emotions, questionable decisions and a fire that now threatens an entire town. Wrapped up within all of that, then, was the groundwork for potential love, as two girls seemed to have found more than just friendship when they entered each other’s lives.

The second of three planned episodes, Brave New World continues this story, and resumes during a meeting between Chloe, Rachel, their parents and Blackwell Academy’s resident principal. The reason? Well, that’s simple: After skipping school, jumping onto a train and venturing out of town, they’ve been called to face the consequences of their actions. For Chloe, this could very well be the straw that broke the camel’s back, and for Rachel, such trouble could threaten both her academic and theatrical pursuits. It’s here where the first set of major choices come into play, as the user must decide how to handle the meeting and what to take the blame for. 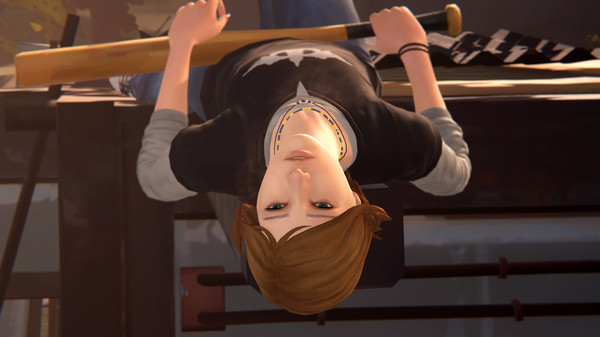 It seems like the end result here is that Chloe is always suspended, and long-term. Thus, the rest of the episode consists of her dealing with the fallout, that being stricter rules at home at the hand of a more overbearing parental unit and disdain from Rachel’s family. That, as well as the realization that she won’t be able to graduate with her friends. All this happens within a core narrative that keeps progressing, and introduces a new dilemma in the form of drug dealers, who ask Chloe to do something that puts her in danger’s way. How she handles it has an impact not only on herself, but others as well.

All this time, Chloe is thinking about running away and doesn’t want to face going home.

The thing about Brave New World is that, while it attempts to continue Chloe’s story in interesting ways, it fails to really connect with the proverbial ball and is far from a home run as a result. It has its moments, but never really comes together, and the main reason for this is a lot of meandering. There’s one specific segment, which takes place in a very familiar junkyard, which really hammers this complaint home. There, Chloe finds herself hiding out and working towards running away, but it all amounts to a lot of slow meandering. Perhaps the results will pay dividends in the third and final episode, but it certainly doesn’t do anything for Brave New World’s pacing, or offer much to the player.

While playing this, I felt something that is new to me — at least in terms of Life is Strange — and that’s boredom. Excitement for this series overflowed while I made my way through the first episode of Life is Strange: Before the Storm, but said excitement evaporated over the course of this one. It simply felt ho-hum, and didn’t connect with me all that much, nor did it seem to connect together nearly as well as it could’ve, or as well as previous episodes had.

There were also some performance issues, which were surprising given the quality of the first segment. Two or three moments were marred by freezes that made me wonder whether the game was going to crash. A couple were short, but one lasted noticeably longer and impacted the experience more as a result. Outside of this, things ran well, although some of the character models’ facial animations and lip-syncing were occasionally underwhelming.

When all is said and done, this very middling and ultimately mediocre episode will surely pay dividends. After all, it does put Chloe into some danger, and also presents a few interesting choices along the way, some of which will have major consequences in what is presumed to be the final episode of Life is Strange: Before the Storm. However, as a huge fan of the series, I can’t help but feel disappointed and underwhelmed by it, even if it’s not exactly bad and is simply mediocre overall. I mean, it does end with a bit of a bang, albeit not as much of one as what we saw at the end of the first episode, and that sets up an intriguing finale that I cannot wait to play.