Wolfenstein is practically as old as gaming itself, having begun life as a crude stealth game before evolving into the first-person shooter that we know it as today. What was once a much slower-paced experience is now a fast-paced, bullet-filled fever dream, in which colourful characters battle against technologically advanced Nazis in an alternate timeline. One where Hitler’s forces won the Second World War, and have improved so quickly that they now use giant robots and mechanical dogs to do their evil bidding.

Enter Wolfenstein II: The New Colossus, which picks up after its predecessor, The New Order. In doing so, it presents the player with a choice, asking them to pick which in-game timeline they would like to play within. This is accomplished by once again choosing whether Fergus lives or dies in favour of another ally. Of course, both alter the way that the narrative plays out, even if it’s more slight than major.

This time around, a broken and almost dead B.J. Blazkowicz must once again do battle against the Nazi party, which threatens not only his friends and lover, but also the United States of America. In fact, much like in Homefront, wherein North Korea had assumed militarized control of the USA, Germany’s heinous Nazi party has set up shop and taken control of the lower 49. They’ve done so with power, and with the help of robotic technologies that kill on command.

Upon waking up from a 5 month-long coma, during which he was consumed by fever dreams based around terrible past events, our severely injured hero finds himself in the midst of a shootout on a large ship. Taking matters into his own hands, he hops into a wheelchair and uses it to get around, as he does battle with black clad Nazis who wish for nothing more than his death. This is easily one of the most unique forms of transportation one has ever used in a first-person shooter, but it fits the quirky nature of Wolfenstein as a whole. This is a game (and a series) that holds no punches, and is never afraid to go off the deep end. 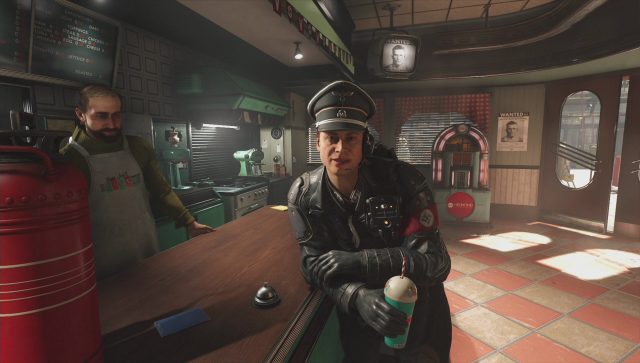 The rest of the game isn’t spent in a wheelchair, however, as B.J. eventually finds himself a suit that is able to help him walk (and fight) again. This power armor then acts as his everything throughout the majority of the campaign, which takes the chiseled war vet from sea to land and back again, and even includes a trip to Venus. Hell, B.J. also gets to go home again, at which point he faces demons from his past that still haunt him to this digital day.

Frau Engel acts as the main villain herein, and she’s a sadistic bitch who’s as evil as those who came before her. As a focal point, she provides the game with a sold antagonist, although she’s not the greatest enemy to ever walk digital earth. Nor does her story conclude in great fashion, as the game tends to end somewhat abruptly.

The narrative is, at times, silly, and that won’t appeal to everyone. However, fans of the franchise have gotten used to the tongue-in-cheek and bloody way in which Machine Games has presented the Wolfenstein series this generation. I’ll admit that I skipped some cutscenes, but the honest truth is that I just didn’t connect with the characters or the game as a whole, which was also the case with The New Order. While everyone else seemed to love it, I found it to be mediocre overall. It looked nice, but didn’t play as well as it looked.

This problem unfortunately carries over into Wolfenstein II: The New Colossus, which is marred by gunplay that isn’t as good as it needed to be. Aiming isn’t perfect, nor is it as user friendly as it could’ve been, and the hit detection leaves something to be desired. It’s sometimes hard to tell if you’ve actually hit an enemy, as there’s little in the way of oomph, or good feedback. Enemies will react, of course, but it can be tough to tell when those you’ve shot are not close.

And there are a lot of enemies. So, so many enemies.

What’s weird about this game is that, while it presents itself as a balls to the wall shooter, it doesn’t exactly play that way. There’s an identity crisis here for sure, because thanks to a heavy handed difficulty that makes its copious amount of challenge levels almost useless, as well as forced stealth that punishes those who go in guns-a-blazing, it’s hard to get a grip on exactly what this game wants to be.

While Wolfenstein may have begun with stealth in mind, everything about this version supports it being more DOOM-like than anything else. However, so many segments force the player to crouch and stealthily take out enemies, en route to generals who will sound alarms if they notice B.J. Almost every level tends to have at least one of these segments, and they slow things down too much. It can also be tough to avoid detection completely, because enemies are hawkeyes and happen to be plentiful.

Some stealth would’ve been okay, but there’s simply far too much here, and it’s not very fun.

Getting back to the difficulty, it must be said that those who beat Wolfenstein II on its hardest challenge mode are masochists who deserve commendation. Unlike The New Order, which I played part of on uber before switching to hard and finishing it on that difficulty, The New Colossus only really offers varying degrees of hard outside of its easy difficulty. Even then, the easy mode isn’t a cakewalk.

Enemies tend to hit really hard, and there’s so, so many of them that it’s rare to get a reprieve. Later on, things become especially crazy, with large groups of foes who surround the player. It’s not fun on tougher difficulties, but some have said that they’ve persevered and succeeded by finding some sort of cover and then leaning out to shoot. That isn’t Wolfenstein, though.

On the presentation front, The New Colossus is quite successful. It’s colourful, and looks really good despite being a first-person shooter that features lots of bleak and dilapidated battlegrounds. It also sounds quite good, with solid voice acting that features just enough overacting to bring out the Wolfenstein charm. It’s just too bad that the game doesn’t play as well as it looks and sounds, because if it did then it’d be a bonafide winner.

Now, with all that having been said, it’s time to conclude this review of a game that I was personally hoping would’ve been a lot more fun than it ended up being. Wolfenstein II: The New Colossus has lots of things going for it, but it doesn’t use its quality building blocks to promote good, fun and accessible gameplay. The game’s inflated difficulty hurts it, as does its poor hit detection and mediocre gunplay. Thus, it’s hard to recommend at full price, and is something that we consider to be one of the bigger disappointments of 2017.

**This review is based on the Xbox One version of the game, which we acquired ourselves. We played it using an Xbox One X review unit.**

Wolfenstein II: The New Colossus Review
Wolfenstein II: The New Colossus isn't the game we were hoping it would be. Its gunplay is mediocre, and its hit detection is poor, which doesn't help a game that is already punishingly difficult. Nor do its forced stealth segments, which are far too common.
Visuals84%
Audio77%
Gameplay48%
Storyline51%
The Good Stuff
The Not-So-Good Stuff
2017-11-30
49%Overall Score
Reader Rating: (0 Votes)
0%