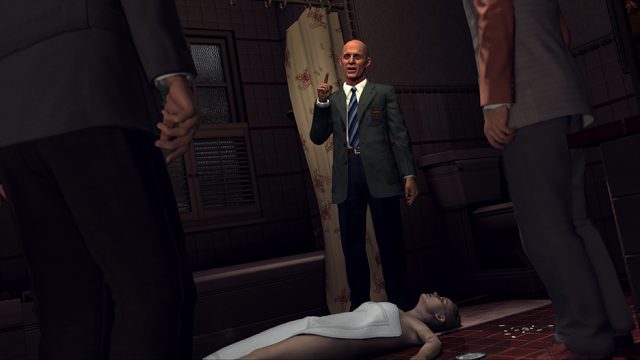 Though it has dabbled in other genres, Rockstar Games is known for one thing: big, immersive and fully open world games. The one that always comes to mind is, of course, Grand Theft Auto, but the truth of the matter is that GTA is not the publisher’s only massive genre entry. After all, there’s also Red Dead Redemption — a series that will see its third entry release in 2018 — and it’s flanked by a couple of very good games that aren’t given as much credit as they deserve. I’m talking about Bully, and Team Bondi’s L.A. Noire, which has just made a return on Xbox One, PlayStation 4 and Nintendo Switch as L.A. Noire Remastered, with all of its DLC intact.

Set in the 1940s, L.A. Noire tells the story of a digitized policeman turned detective named Cole Phelps. The young war vet, who’s come to the City of Angels in search of his true calling, begins his scripted narrative as one of the settlement’s blue clad beat cops, but doesn’t stay in that position for long. Early on, his caseload is short and sweet, but it isn’t long before the higher ups notice the talent and work ethic that they have on their hands. This quickly leads to a promotion to a detective position in the precinct’s traffic division.

While the police work is somewhat random and doesn’t fit just one type of crime, the detective’s life is much more structured, and comes with early morning briefings and case assignments. This fits L.A. Noire like a glove, too, because the game is structured in a way that is best described as a series of intricate cases tied together by its main character’s ascension and personal narrative. You move from case to case, and do your best to solve each one, while examining evidence, interviewing witnesses, interrogating criminals and combining everything that you’ve learned in the process.

The uniqueness of this game isn’t limited to how it’s structured. You see, what Team Bondi did with this thing was quite remarkable. By choosing to focus on creating realistic facial animations, complete with tells and believable human emotions, they were able to deliver something special. As such, when players are asked to interview witnesses, suspects or known criminals, they do so knowing that they’ll be able to get a good idea of whether or not that person is telling the truth just by looking at them and watching how they act. It was something new at the time, and it’s still uncommon even six years later.

When L.A. Noire first came out, back in the spring of 2011, it presented three different interrogation options, with those being truth, doubt and lie. During development, these options were actually coax, force and lie, which gives reason as to why Phelps goes a bit overboard (at times) when the player selects the second option. Now, with L.A. Noire Remastered, these choices have once again been renamed to good cop, bad cop and accuse.

The crux of the gameplay here involves gathering evidence through investigating crime scenes and speaking to witnesses. Evidence that can then be used to accuse suspects, which is something that always requires proof, else said person will laugh in your face and continue to plead innocence. Most crime scenes offer a good amount of clues, which are indicated by musical clues, but not all of them actually matter, as some happen to be empty beer and pop bottles and kitchen utensils. Cole will usually give audible clues as to which piece is important, and which one isn’t, and turning said clues around in your hand can often lead to more information. The same is true of pressing A at times, as doing so will propel the protagonist to open boxes or investigate further.

Hell, some clues are even puzzles, which task you with doing things like lining up a globe, putting pipes in the right order, or returning wrenches to their exact positions based on colour and size.

As Cole progresses through his case load, he (well, the player) is ranked based on certain criteria. This includes the expected, like how many clues were found and how many interrogation questions were handled correctly, and the unexpected. The latter boils down to things you’d be punished for if you were a real-life detective, like vehicular damage and damage to the city, both of which can stem from poor driving. It’s obviously also very uncouth for a detective to hit, run over or shoot a civilian.

Completing these cases also leads to further promotion throughout the Los Angeles Police Department, with stops in other divisions playing a big role. Said promotions offer more than just prestige, too, as they also introduce more intricate cases, new partners and unique dialogue options that appear while driving. There’s a lot of driving, too, as L.A. Noire Remastered is not a fast travel-filled game, and is one that requires you to transport yourself from one point to another quite frequently, using automotive means.

There are close to one hundred different vehicles to drive in this immersive and realistic-feeling version of 1940s Los Angeles, including old Chevy and Ford chassis. Plus, since you’re playing the role of a police officer (or detective, as things progress to), borrowing someone’s vehicle will not lead to the cops being called. After all, police are able to borrow a civilian’s car for the sake of duty in emergency cases.

You’ll want to spend most of your time in a sanctioned police vehicle, however, because there are perks to doing so. Police cars (and the black detective ones that complement them) come equipped with radios, as do the vehicles driven by crime scene photographers. This radio is the key to finding the game’s secondary content, which is comprised of forty different street crimes of varying types. Fellow officers will call for help, and the radio dispatcher will also share news of crimes-in-progress that you can then press a button to respond to.

After a while, the street crimes do get repetitive, but they’re a nice change of pace and offer some old fashioned open world fun. Shootouts are not uncommon, and there are usually different ways in which to approach each scenario. For instance, it’s possible to chase down a suspect or shoot them dead from afar. Going further, warning shots will also make some stop. If you follow many of them for too long, they’ll lead you up to and across rooftops, and will often take hostages, forcing Cole to shoot them dead when they peek their head out from behind their prisoners.

The one downside to these street crimes, outside of their occasionally repeated types, is how far some of them force you to drive. While real life police officers respond to crimes that they’re close to, Cole and his partners get calls about events that are half-way across town, and are then forced to make lengthy detours to get to them. Of course, we’re talking about optional bonus content, but completionists will encounter this ‘issue’ quite often.

On paper, L.A. Noire‘s focus on interrogations, dialogue and detective work may make it sound like a tedious and boring game, but it’s definitely far from that. This game has some issues, including times where it’s hard to tell which interrogation option to use, but it’s a lot of fun and easy to get lost inside. There’s quite a bit of free roam gameplay, thanks to the aforementioned street crimes, some expected collectible (landmarks, golden records, newspapers and more) hunting, and a surprising amount of shootouts that fans of Grand Theft Auto will appreciate. This is, however, a slightly different beast, and one that is slower and more methodical than its gang-filled peer.

This is also very much a narrative fueled game, and one in which a secondary story plays out in parallel. You can access this tale — of a mental health doctor whose strange treatment methods involve allowing his patients to hurt others — by finding the above-mentioned papers and pressing A to watch the stories behind their headlines. Thus, it’s very easy to get a cinematic vibe off of this thing, which is surely what the now defunct Team Bondi was going for.

With the amount of attention that was paid to its characters’ facial animations, it was hard not to be impressed by what L.A. Noire offered back in 2011, especially when it came to its visuals. This excellence still remains more than six years later, despite advancements in technology. For the most part, this is a very good and polished remaster, which accentuates its source material and helps it look good on more powerful hardware. Sure, there are some downsides, like the occasional dated texture or animation, as well as the odd bit of pop-in, but that’s easy to accept and overlook. After all, this is an open world game and pop-in has always plagued them.

The audio is also top notch, thanks to some very good writing and excellent voice acting that brings it to life. The characters, then, not only look believable but also sound the part. The music, radio chatter and other sound effects also fit the time period well, as does the game’s realistic art direction and its accompanying visuals. The world feels alive because of all of this, and the developers’ attention to detail is appreciated. This is highlighted by intelligent use of black and white video, which opens certain cutscenes before they begin to slowly adopt colour.

At the end of the day, it’s difficult to find much to complain about when it comes to L.A. Noire Remastered. While its structure and focus may not appeal to everyone, those who appreciate good gameplay, interesting storylines and an outside of the box approach will likely fall in love with what is presented here. This is a very good game overall, and one that doesn’t really feel like it’s more than six years old.

L.A. Noire Remastered Review
L.A. Noire Remastered marks the return of one of the last generation's underappreciated gems. Even though more than half a decade has passed since it first released, the game is still as immersive, entertaining and unique as it's always been.
Visuals81%
Audio87%
Gameplay80%
Storyline86%
The Good Stuff
The Not-So-Good Stuff
2017-12-17
84%Overall Score
Reader Rating: (0 Votes)
0%